House Wren Defending a Nest Site on the Tuolumne River 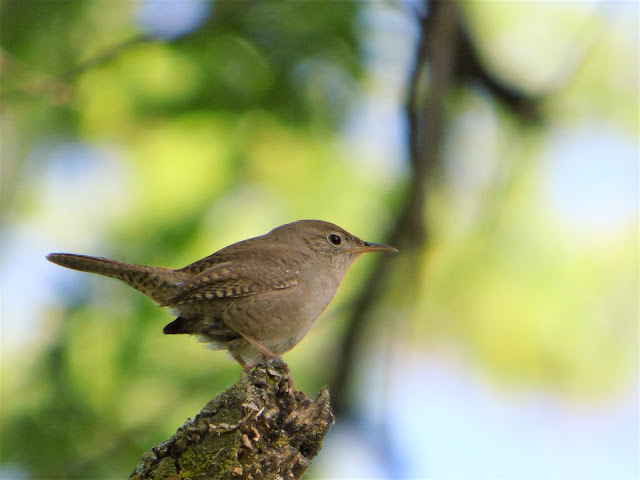 It's spring in the Sierra Nevada foothills, and life should be exploding along the Tuolumne River where it flows into the Great Valley of California. But this isn't a normal year. We've been suffering through five years of the worst drought ever recorded in the state, but this year was the polar opposite. We've had near-record precipitation, the mountains are coated with deep drifts of snow, and the rivers are swollen with runoff.

The impressive runoff is a positive development in so many ways, especially for the agricultural economy downstream, and most ecosystems, from the alpine meadows to San Francisco Bay. But there is one ecosystem that is getting adverse effects: the Tuolumne River floodplain. The problem is the presence of Don Pedro Reservoir upstream. It filled early in the season, but the flood-producing rains of January and February caused lake levels to rise too high, and the dam threatened to run over in an uncontrolled fashion. In response, water has been released from Don Pedro at or just above flood level ever since January 4. This means that the floodplain, an important habitat for uncounted animals and plants, has been underwater for nearly three months, and the prospect exists that it will continue to be flooded until well into the summer. I saw evidence of this last month on the lower reaches of the river where hundreds of rabbits were trying to subsist on the bit of grass growing on the river levee. Their normal home was under ten feet of water. 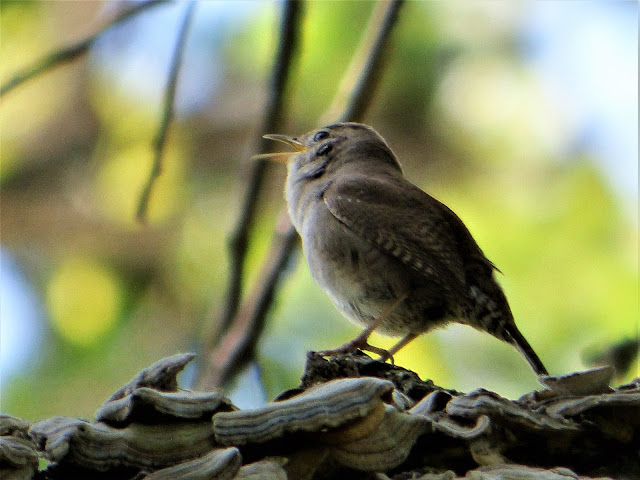 Under normal circumstances, the floodplain ecosystem is superbly adapted to flooding events, but a six-month long continual flood is not something that happens in nature. Tree roots are inundated, soil and plant seeds are washed away, and the river is likely to change course in many places. The loss of hundreds or thousands of acres of river bottomlands has to be having a detrimental effect on the wildlife of the river. I've noticed a relative lack of bird activity, and some of my walks have been come up empty in the photograph area.

I'm happy to say that activity picked up a bit today as I wandered through the oak woodland. I saw half a dozen small songbirds in the branches, although I had a hard time catching photos of most of them. But one kept coming back to the same perch on a dead snag. I got a fair number of sharp pictures, and then I noticed the hole in the trunk of the tree with a head peeking out. The bird, a House Wren (Troglodytes aedon), seems to have been defending a nesting hole. I'm pretty sure it was the bird I saw driving several others into the underbrush before returning to its perch and singing. 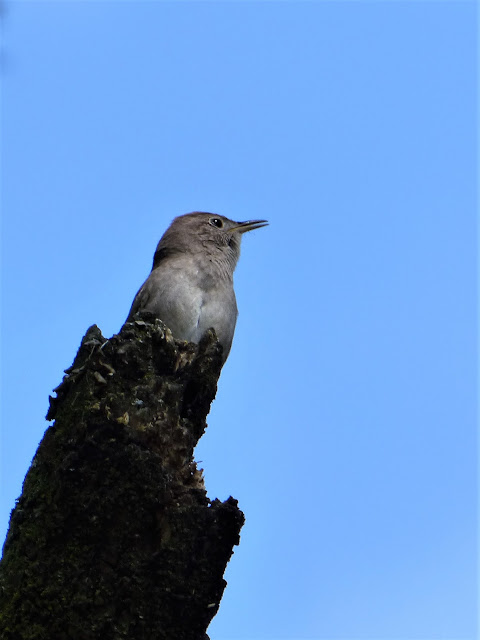 House Wrens are common birds, and their range extends from the south end of South America to southern Canada. They can also live in a wide variety of habitats, from sea level to alpine elevations. It once again tells me that my observation skills still need some work, because this is the first one I've seen on the Tuolumne River (although I saw a Bewick's Wren there last year). 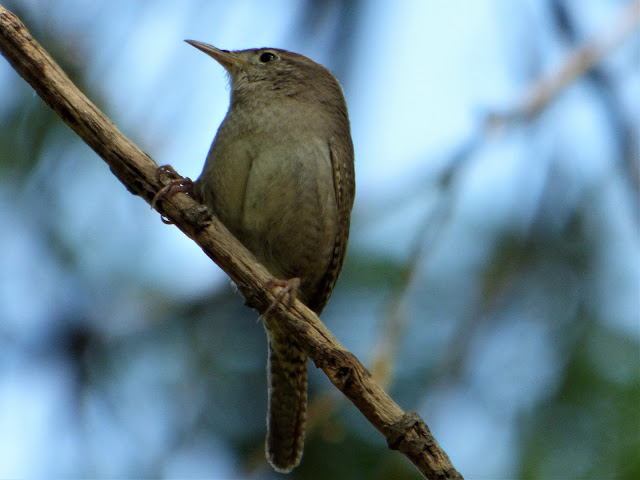 The House Wren has a pretty call. I took a video of the wren singing, although you'll have to turn up the sound. I was a fair distance away, using extreme zoom to get the video. Enjoy!