Harbinger of Climate Change? The Vermilion Flycatchers of Stanislaus and Merced Counties 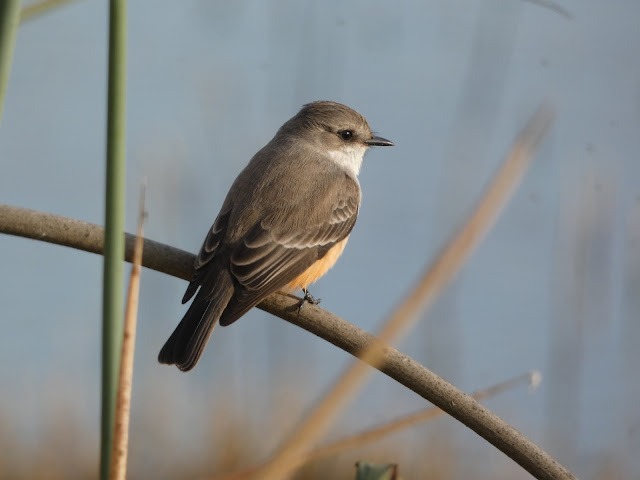 According to the eBird records, the first sighting of a Vermilion Flycatcher (Pyrocephalus rubinus) in Merced County was in 2003, and the first in Stanislaus County was in 2012 (the official records may be different). They certainly aren't common. It appears only two individuals have ever visited Stanislaus. But the numbers in Merced are intriguing. Prior to 2020 the sightings have been of a single birds that caused quite a stir among the local birders. They were outliers in other words, accidental wanderers. But this year it appears that there may be as many as seven individual birds in the county: three at Lake Yosemite, and at least three but maybe four at the Merced National Wildlife Refuge. Some are immature, suggesting that some local pairs may be breeding. 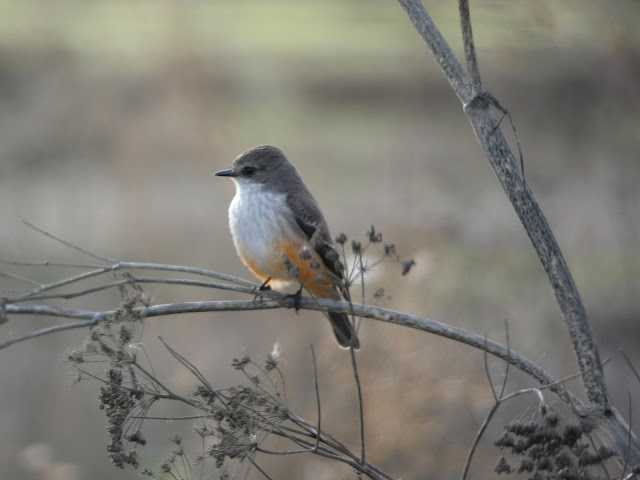 We saw our first female ever in late November at Merced NWR. It was on the west side of the auto route, and was a surprise to us because most of the sightings have been on the southeast part of the refuge. And it was perched right along the side of the road, hardly 20 feet from our car. The female  lacks the brilliant vermilion coloration, which can make it easy to miss. We didn't expect to see it again when we were there today, but there it was, almost in the same spot! It's more than a mile from where others have reported a mature male and female, and an immature male. I looked and looked but wasn't lucky enough to see the others. 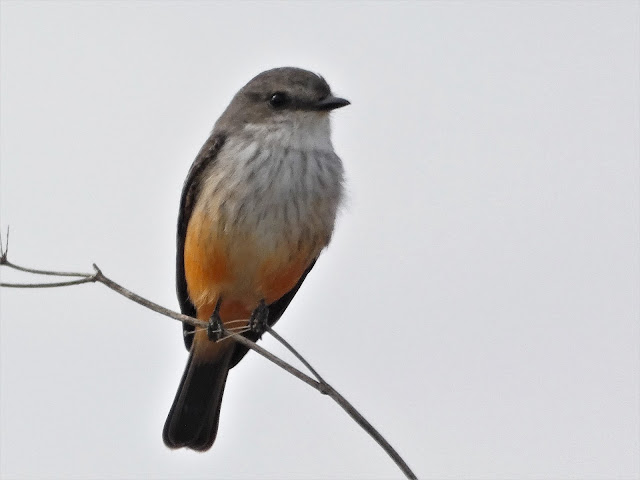 The sole Vermilion Flycatcher in Stanislaus County is nothing if not consistent. He has occupied the same fence and shoreline along Dawson Lake (a small irrigation reservoir in the east part of the county) since late 2017, leaving during the summer months, but returning like clockwork in the fall. We saw him on December 16. The lake is on private property, so most pictures of this bird are from a great distance, as you can see below. 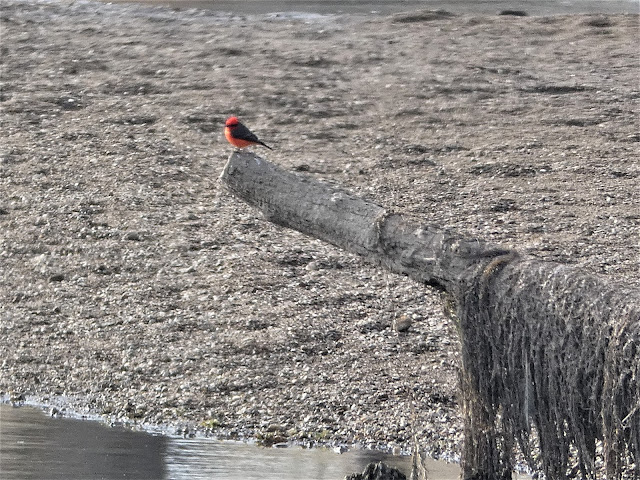 I cannot claim any specific knowledge as to why more of these birds have been sighted in the region lately, but it is a known fact that the climate is warming, and a great many species have been shifting to the north in response. The Vermilion Flycatcher is a subtropical species, being common in Mexico and Central America. Other subtropical species have become more abundant in the region, including the Blue Grosbeak and the Phainopepla. This is exciting for us local birders, but can be bad news for the species and the ecosystems they inhabit. Species move in response to availability of food sources and can cause disruptions in their new homes. The increasingly common Great-tailed Grackles for instance are aggressive feeders and have displaced other native species. In a warming world, there will be winners and losers, but mostly losers. Introducing aggressive new species into formerly stable habitats is rarely going to have a positive outcome.The Vermilion Flycatchers don't seem to be in the category of aggressive invasive species, at least not in the low numbers that have right now. As such, they are a wonderful and colorful surprise to see in our local region. 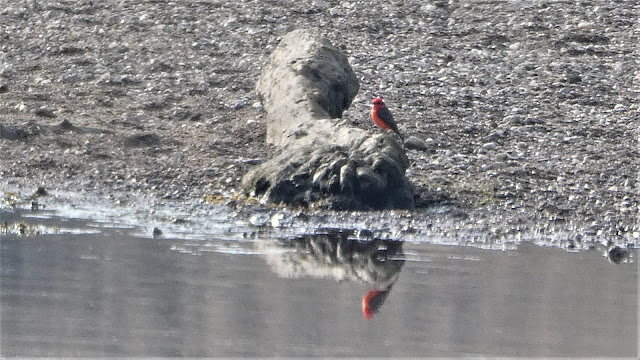 Postscript: Make that eight Vermilion Flycatchers in Merced County. Ralph Baker saw one at the San Luis NWR on November 1!

Up Close and Personal with a Loggerhead Shrike 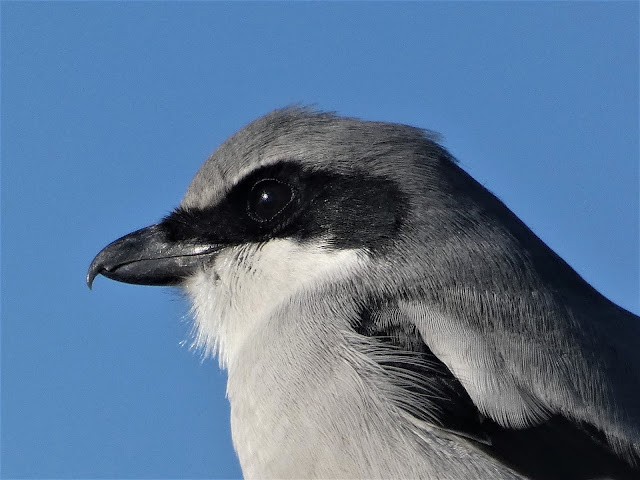 The Loggerhead Shrike (Lanius ludovicianus) is an interesting bird. It is most closely related to songbirds, but in life is more like a small raptor, consuming a diet of large insects, amphibians, reptiles, mammals, and even some smaller bird species. They prefer open grasslands with occasional trees or fences to perch and hunt from. I have yet to see one along the Tuolumne River Trail, but we see them fairly often at our local wildlife refuges. I've photographed them many times, but never quite this close. 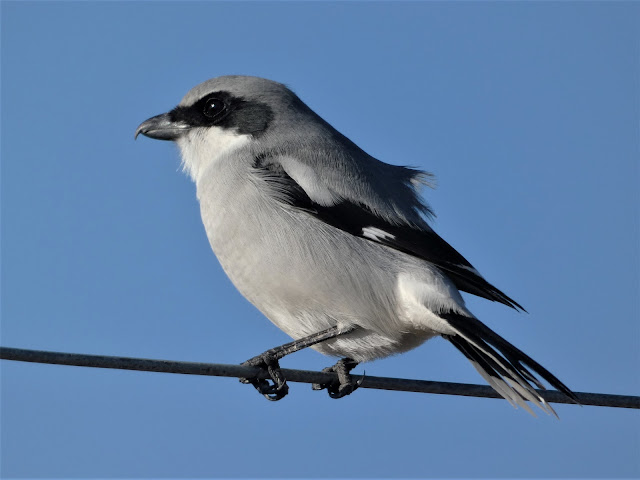 We were on the Waterfowl Auto-tour at the San Luis National Wildlife Refuge south of Turlock yesterday, avoiding all manner of human contact, but seeing lots of birds. The Shrike is often one of the first we encounter, with the fencing of the Tule Elk compound being a favored spot for the bird. Yesterday was no exception, but unlike past experiences this one didn't retreat when we stopped and rolled down the windows. These are the closest pictures I've ever achieved. 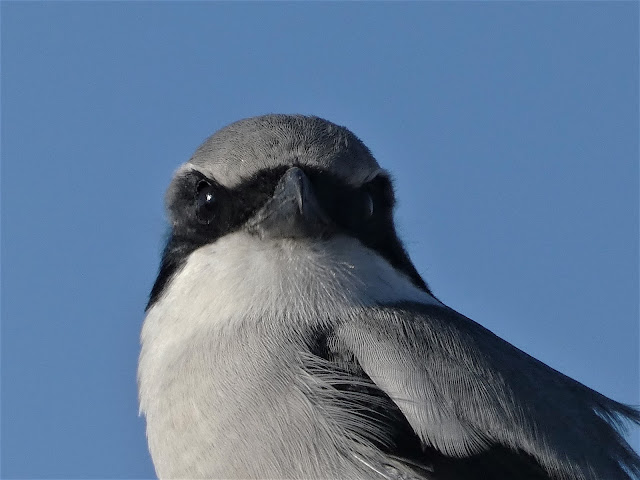 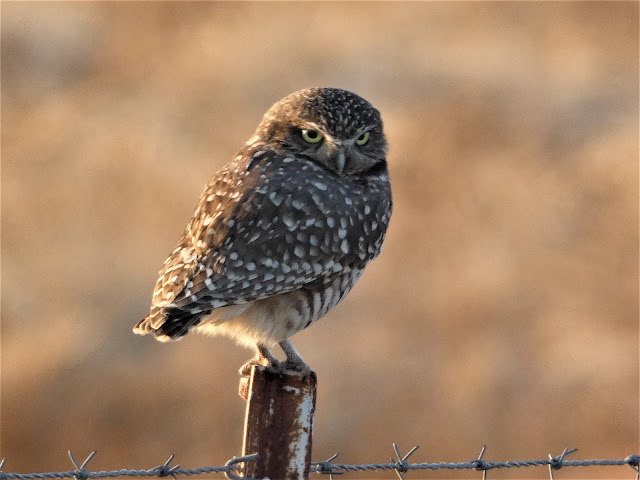 As we get towards the end of the year, I start to review the lists and try and figure out which birds I love, but have not yet seen. Two weeks ago, the Phainopeplas arrived on the Tuolumne River Trail and I was finally able to check them off the list, and the next most favorite bird moved to #1: the Burrowing Owl (Athene cunicularia). 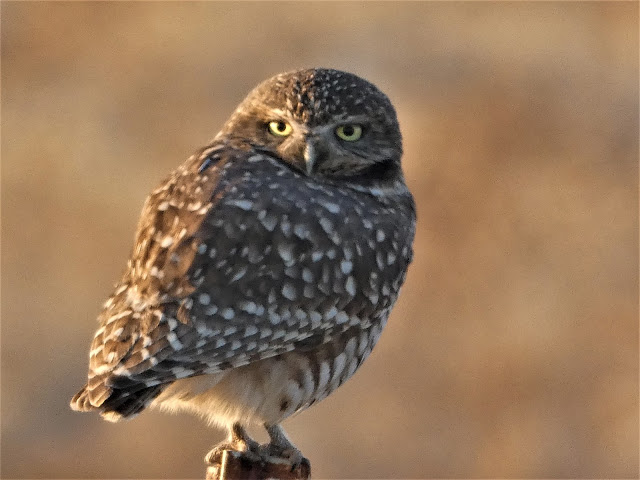 I was distressed about not seeing a single Burrowing Owl all year. I've been concerned about their welfare in our area because they are denizens of the prairie, and the prairies in our region are being dug up and planted with almond orchards, some 40,000 acres in our county in the last decade or so. We've made a number of trips through the seasons on Crabtree and Willms Roads in the Mother Lode foothills between the Tuolumne and Stanislaus Rivers. We've seen lots of interesting birds, but not a single owl was to be found anywhere.

The little owls sometimes dig their own burrows, but most of the time they take over the abandoned burrows of other creatures like badgers or ground squirrels. They hunt and consume a huge variety of small mammals, reptiles, and large insects, and hunt day and night. Almond orchards don't really provide that kind of habitat or food resource, so the birds get pushed east into the foothills. 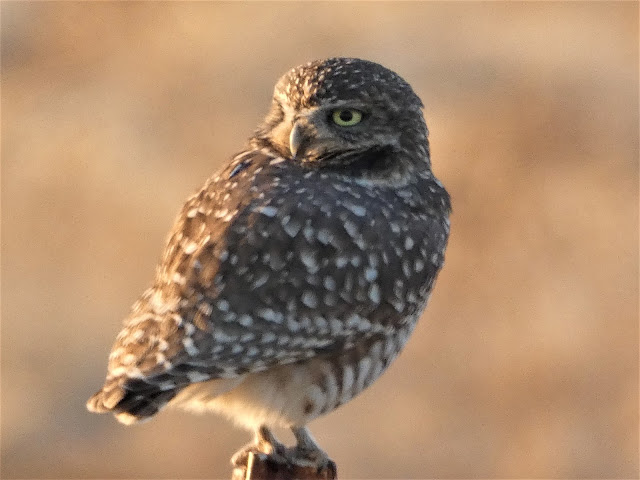 So here it is, early December, and no Burrowing Owls anywhere. I had a few extra minutes this afternoon (it's been a loooong semester), so I drove out Crabtree Road, and finally saw two of them! They were several hundred yards away, and I don't know how I ever spied them. I was pleased, but there were no possibilities for pictures. I headed back home, and saw a bird ahead on the fence by the road, but it flew into a depression and disappeared. I slowed a bit and I saw it land on the fence behind me.. I rolled to a slow stop and very slowly opened the car door to get out and try for some pictures. Much to my surprise, the owl cooperated! Enjoy! 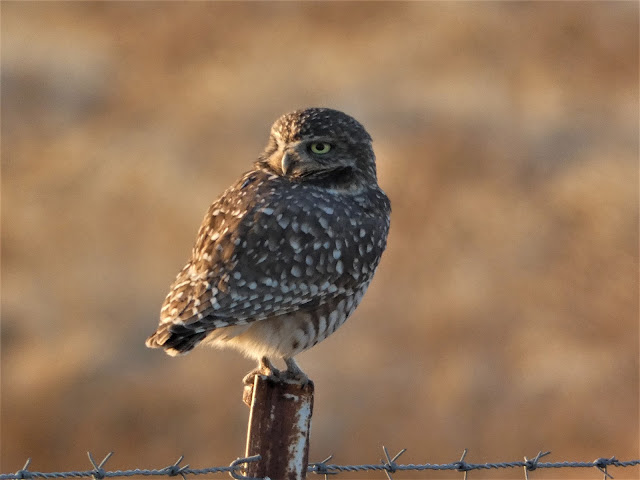