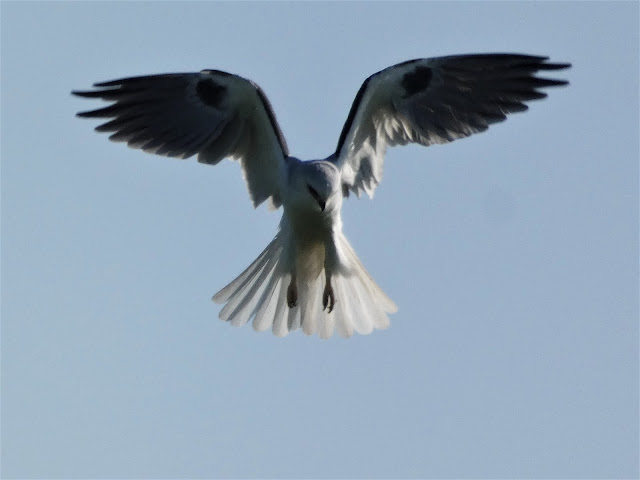 You just never know when a moment of beauty and grandeur will happen. People look at me strangely whenever I go out the door on a mundane errand with my camera in tow, but I've missed too many such moments to ever want to be caught without the camera. 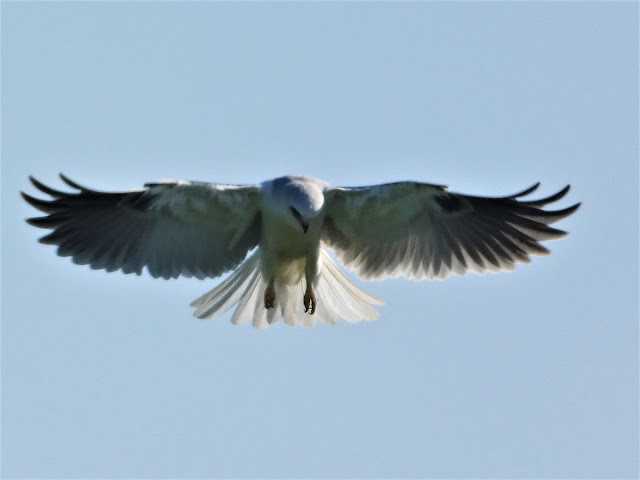 So today it was the pharmacy and the grocery store. We live in an outlying area where the locals refuse to wear masks and get vaccinated, so I headed into the big town, passing a local farm road called Bentley Road. It's still mostly ranching lands, so the prairie birds can often be seen there by birders. It was there that I spied my first White-tailed Kite (Elanus leucurus) of the year, and it was doing what Kites are famous for doing: kiting. That's the talent of hovering in place over the fields to catch the hard-to-spy movements of small rodents and other creatures. Birds in flight are pretty hard to photograph, but a kiting Kite at least stays in one spot while flapping its wings. 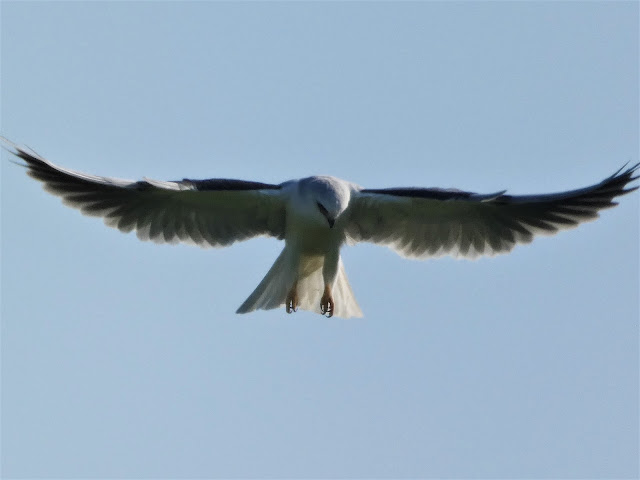 The White-tailed Kite is neither rare nor common in our area. The reports for the new year number fewer than ten. I'll see them a few dozen times this year perhaps, but nowhere near the number of times I'll see the Red-tailed Hawks. They have a limited range in the United States, extending through California, parts of the Oregon coast, and a bit of southern Texas. They are beautiful birds, and my breath catches just a little whenever I spy one.
The Kite was kind enough to stay motionless long enough for me to grab the camera and snap a few pictures. I didn't have the time to see if this particular hunt was successful. 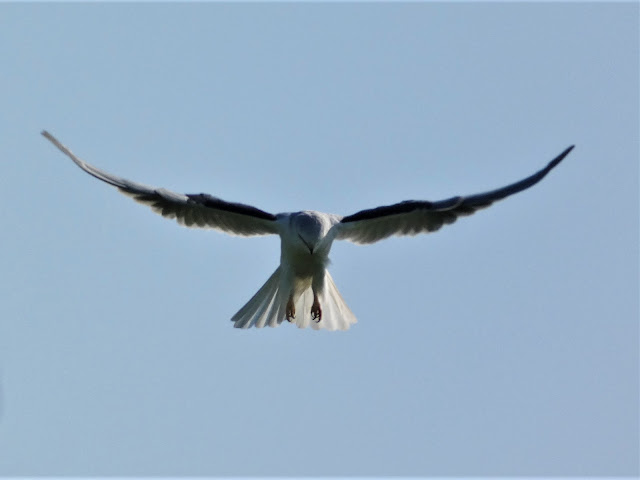 I was thinking the Kite was behaving like a drone, but Kites have been around far longer than drones. The proper historical attitude would be that drones are just basically artificial Kites. 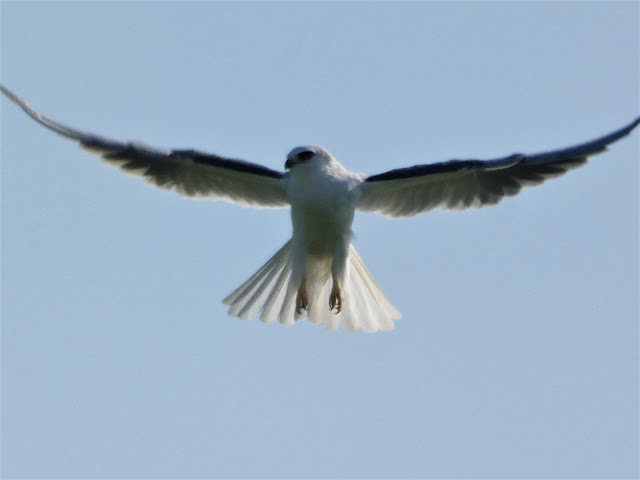 Posted by Garry Hayes at 3:22 PM No comments:

There's No Place Like Home: Hermit Thrush in the Backyard 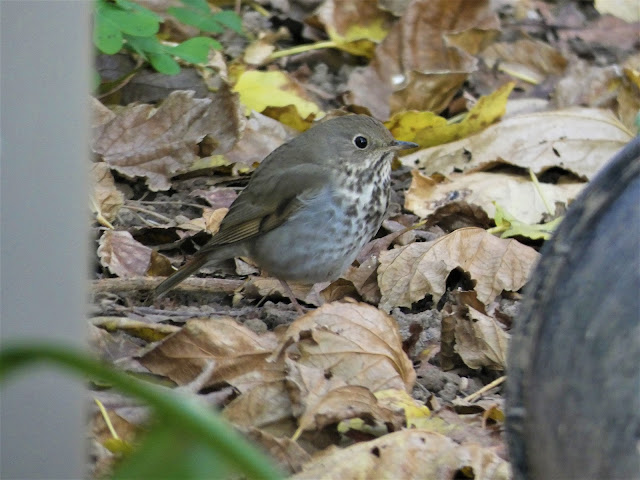 I really love Hermit Thrushes (Catharus guttatus). They are secretive birds, spending much of their time hidden away in the thick underbrush. They live along the Tuolumne River trail that I walk every day, but they are so hard to find that most of 2021 had passed before I saw the first one of the year. Any time I see one there, I'm thrilled, and I call it a good day. 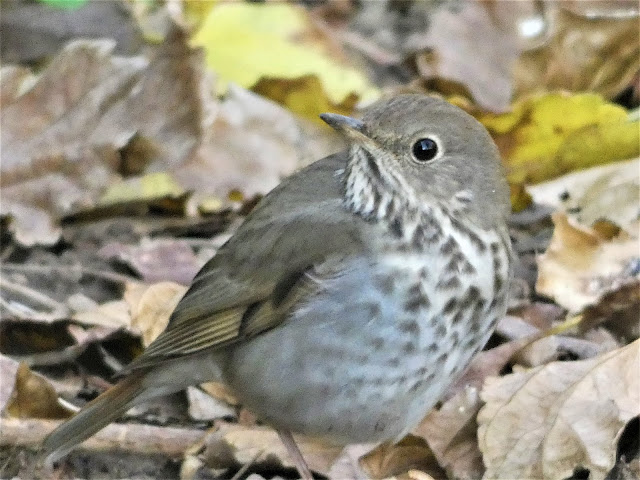 So today I was mowing the lawn (yes, I live in California after all, and it rained a few weeks ago, plus I like to mulch the fallen leaves instead of raking). I was unplugging the mower and happened to look around the corner by the air conditioner, and I saw bird scratching in the leaves. I assumed it was a sparrow, but it looked odd. I quietly stepped back and went in the house for my camera. 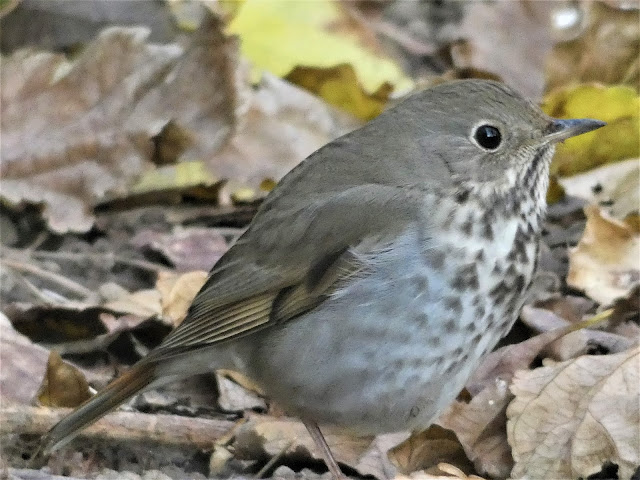 I got back and was just astonished to find it was a Hermit Thrush in my own backyard! I am continually amazed the sheer variety of birds that can be discovered in urban settings. In observations from my backyard and short walks in the local neighborhood we've now seen 59 species of birds. Sure, some of them were flying high overhead. No Sandhill Cranes hanging out in the backyard yet for instance, although Great Egrets and Green Herons have in fact fished out of our lily pond a few times (RIP dear old goldfishes). But today counts as one of the most thrilling discoveries. 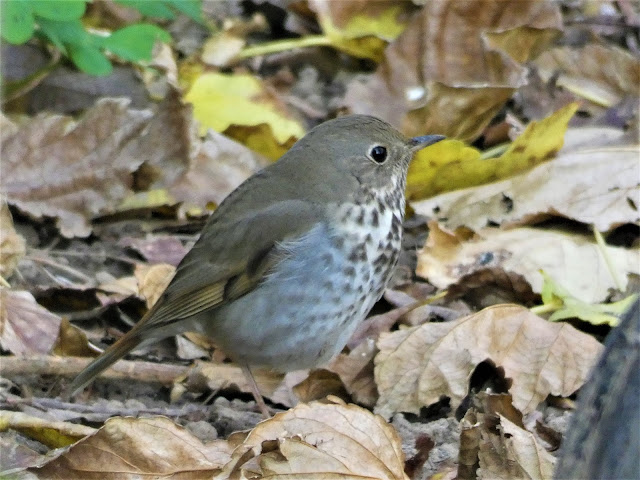 Posted by Garry Hayes at 6:04 PM No comments: