Cactus Wren at Hole in the Wall, Mojave National Preserve 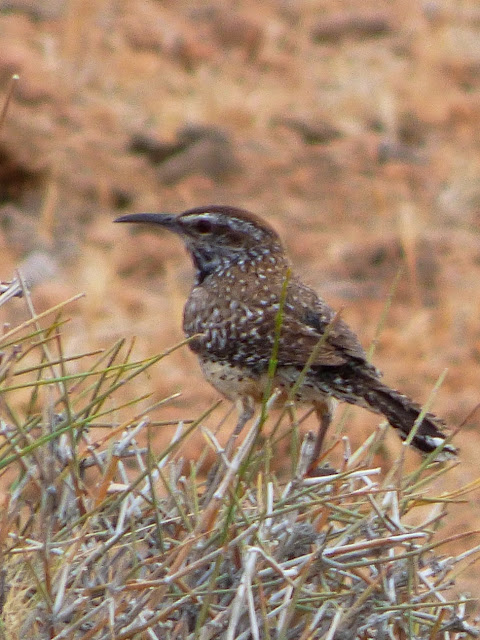 I was exploring Banshee Canyon at Hole in the Wall in the Mojave National Preserve when I spotted another bird species of the desert, a Cactus Wren (Campylorhynchus brunneicapillus). The pictures aren't as sharp as I had hoped, but it was a great distance, and skies were overcast. Still, it was nice to see some new species as we started our exploration of the Colorado Plateau. 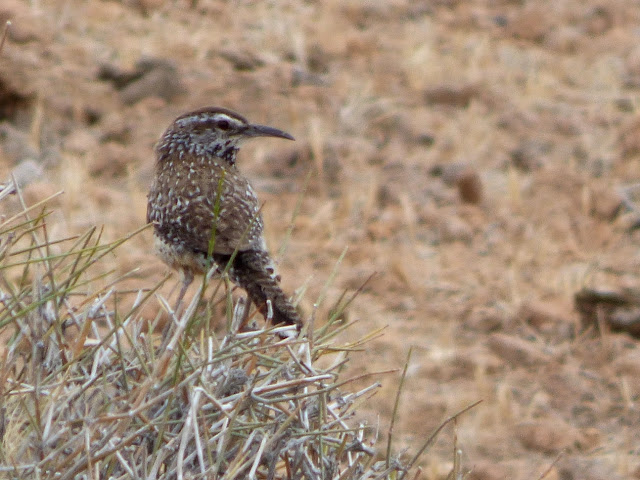 Oh, you think a picture of a Cactus Wren should have a cactus in it? Okay, the bird cooperated for a moment while it foraged on the desert floor... 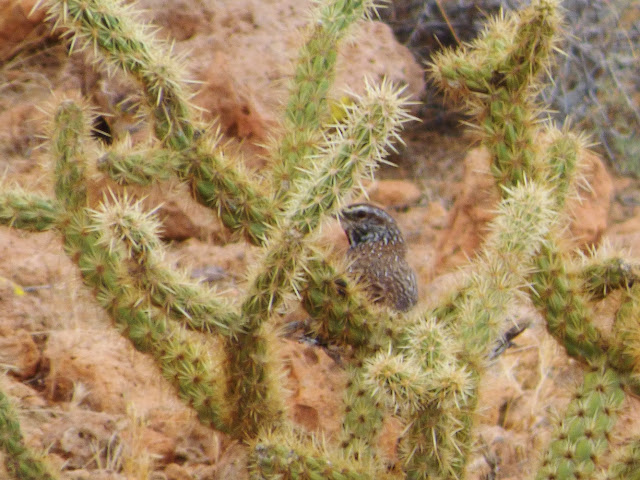 The strange looking rocks are boulders of rhyolite tuff, a rock formed in huge explosive volcanic eruptions, like St. Helens, but hundreds of times larger. The eastern Mojave Desert is an excellent habitat for the wrens, as the slightly higher elevations there produce more vegetation and therefore more insects for the birds to track down. The bird doesn't need open water, deriving what it needs from the food it eats. 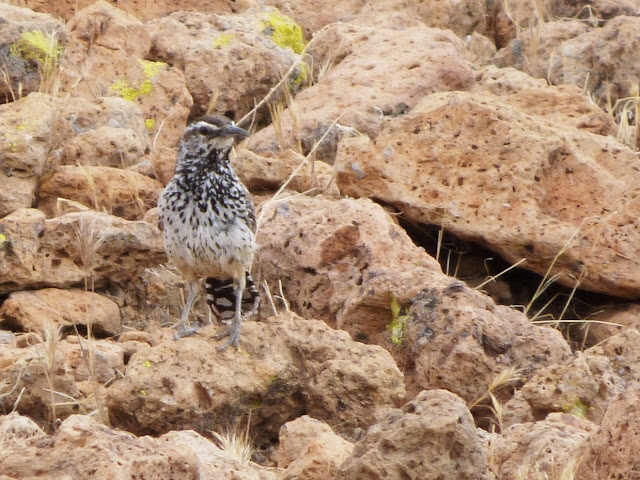 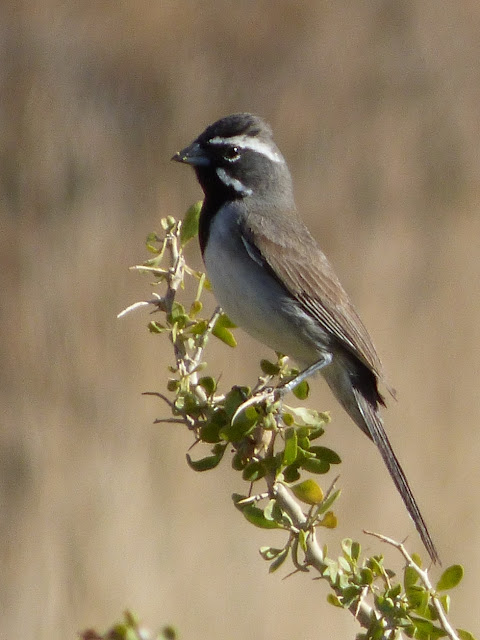 The hiatus is over for a while at least. I've been on a tough road over the last two weeks, leading (and being led by) students all over the southwest. The trip was hectic, wonderful, and epic, but I was never able to go online with my laptop even once. The focus of the trip wasn't on birds, it was on geology and archaeology, but I was constantly on the alert for the possibility of seeing new birds in this new territory.

It didn't take long to add a new bird to my list. Our first night camping was at Hole-in-the-Wall in the Mojave National Preserve in eastern California. When the sun was rising, I heard a persistent new birdsong, and I scoured the slopes near camp trying to locate it. Eventually I found it and got a few distant pictures. It turned out to be a Black-throated Sparrow (Amphispiza bilineata). I would eventually find that it is a common bird of the desert southwest, but I'd never seen one in my home territory. 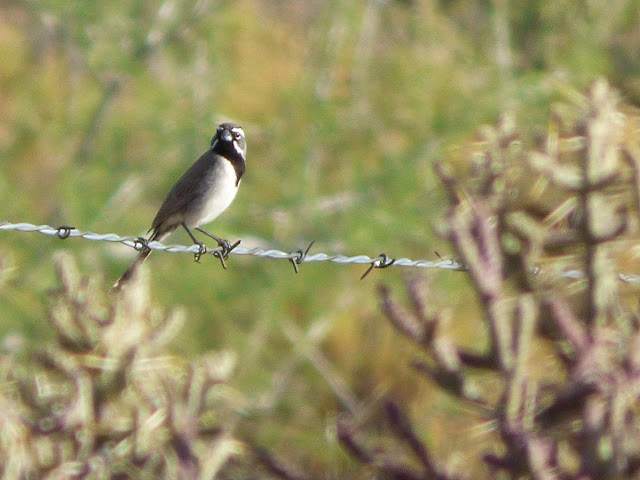 It wouldn't be right to call it a brightly colored bird, as it is white, black and gray, but the markings are certainly bold. It spent a lot of energy singing in the morning around our camp. It wasn't the last time I would see the bird on the trip. More on my other sightings later! 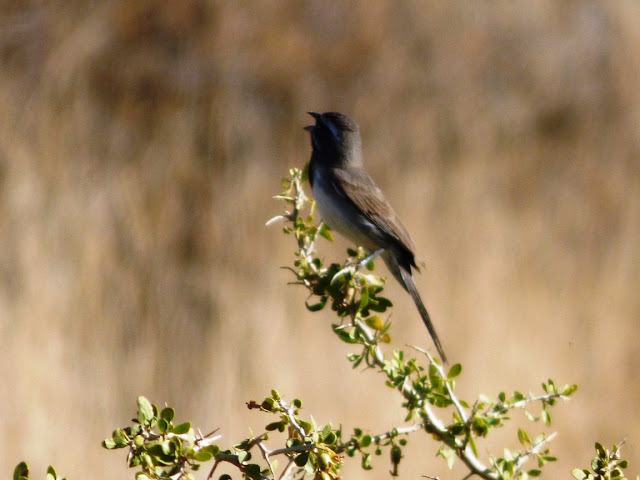 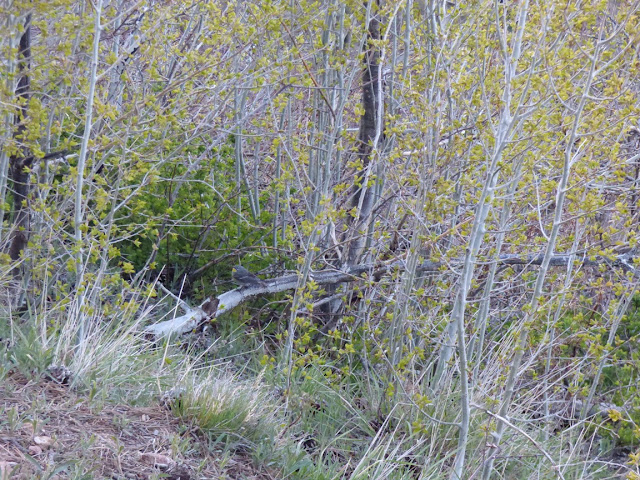 We were on the north rim of Grand Canyon last week enjoying a spectacular sunset when I noticed rustlings in the underbrush. I snapped a couple of shots, hoping to see what kind of bird it was, and as I went through the pictures later, I noticed that I had indeed captured a few images of a Yellow-rumped Warbler (Setophaga coronata). You would think that a bird with bright yellow spots would be easy to see, but not when the shrubs are just coming into leaf with yellow sprouts! 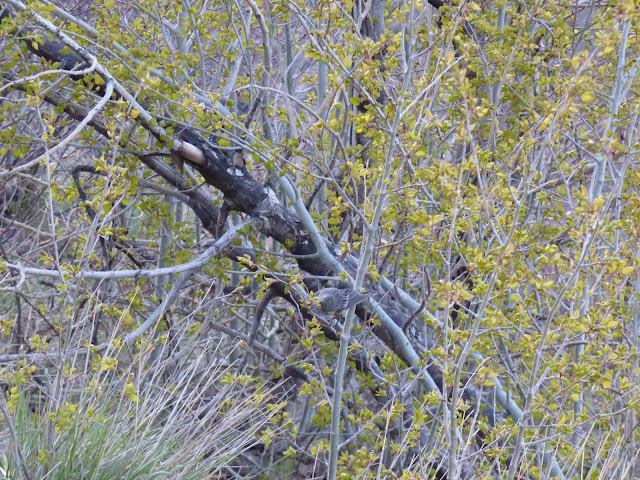 So here is our brief little game of "Where's Warbler?" There really is a warbler in each of these three photos. In one of them he is looking right at you. How quickly can you find all three? 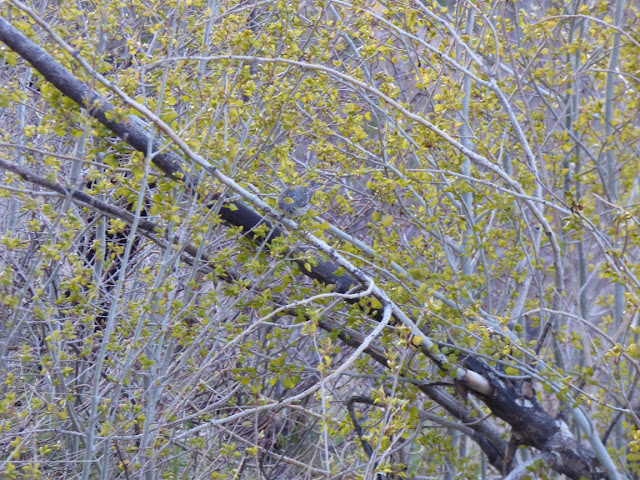 Luckily, the warblers hopped out of the bushes to forage in the pine duff, so here are some more easily observed Yellow-rumped Warblers at Point Imperial in Grand Canyon National Park. 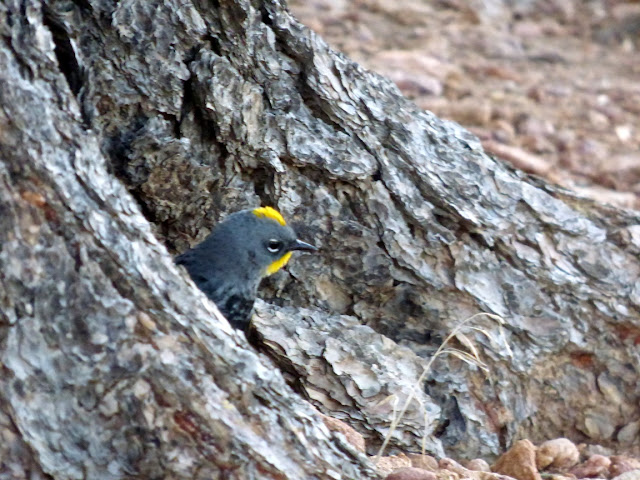 Yellow-rumped Warblers are one of the more common of the warbler species, and indeed are pretty much the only kind I've seen so far, both at home, on campus, and on the road in both Yosemite and Grand Canyon National Parks. 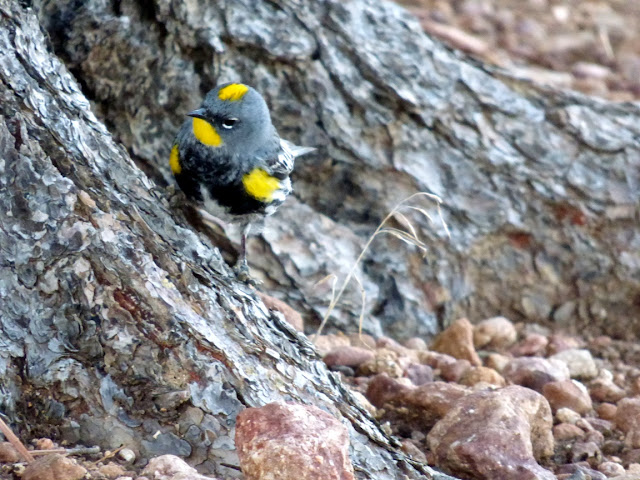 The birds have a range that extends from northern Alaska south to Panama. They have more muted colors in the winter; the bright yellow spots are for show during the breeding season. 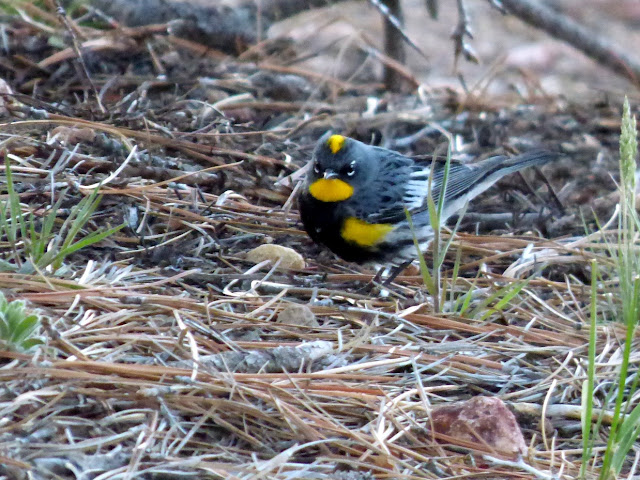 The warblers eat lots of insects, including some pretty serious forest pests like budworms. In the winter they can switch to berries and other food sources. 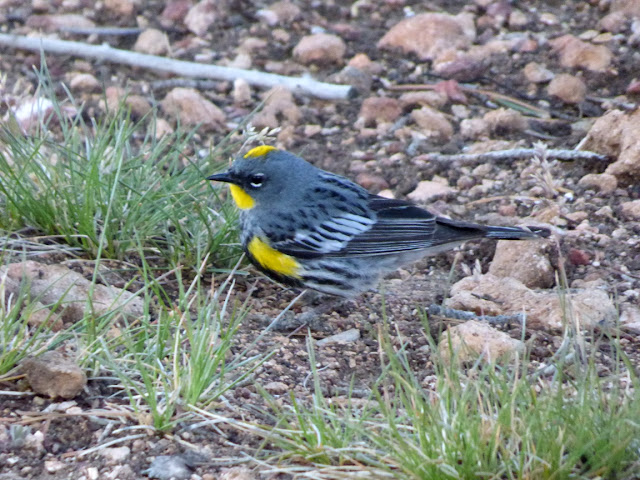 All in all, a colorful addition to the landscape when you can actually see them!
Posted by Garry Hayes at 9:45 AM No comments:

Clark's Nutcracker on the North Rim of the Grand Canyon 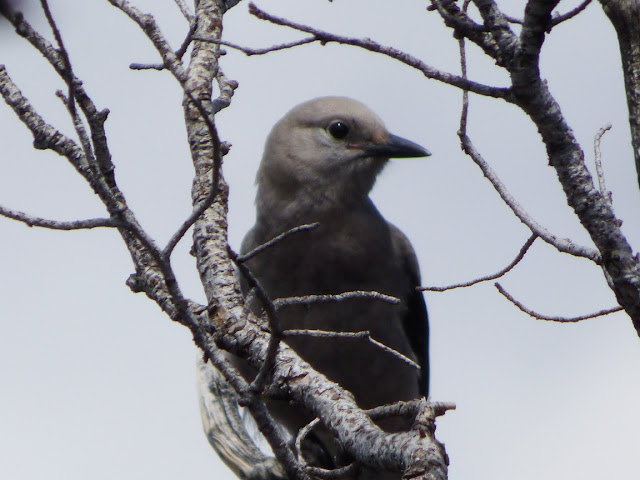 It's the first time on my blog, but not the first time I've ever seen a Clark's Nutcracker (Nucifraga columbiana). I've known these birds since I was a teenager on my first backpacking expeditions in the Sierra Nevada. They are raucous members of the higher mountain elevations, familiar to anyone who ventures towards the treeline, the realm of the Limber and Whitebark Pines. It's the first I've been able to photograph with a good camera. I saw it while walking out to Cape Royale on the north rim of the Grand Canyon last week. It was chasing another Nutcracker through the trees. 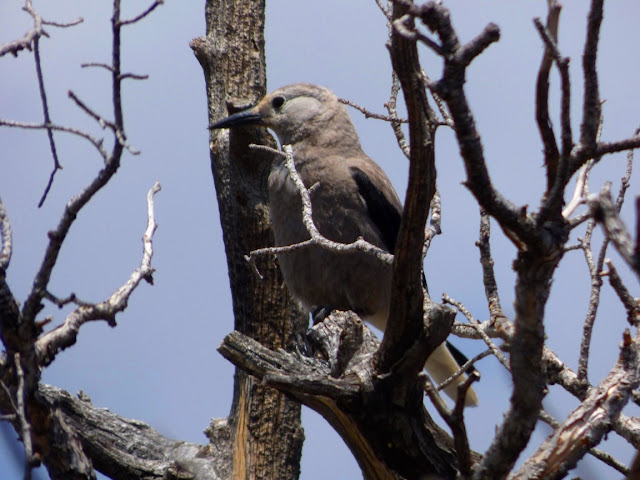 The birds are a an important part of the high elevation ecosystem. They spend their days collecting pine seeds and burying them all over the forest, storing them for later consumption. They have an amazing memory for remembering where most of the seeds are buried, but they usually miss a few, and those are the seeds that germinate and perpetuate the forest. 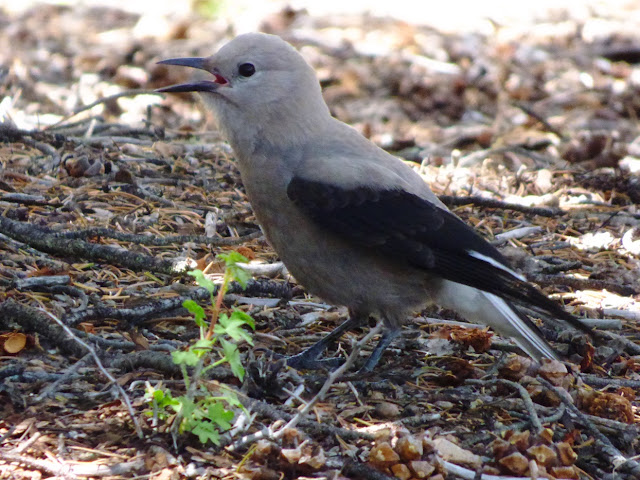 It took me a while to realize it, but one of the two Nutcrackers chasing about the trees was a juvenile loudly demanding food from mother. I guess teenagers are the same all around, no matter the species. 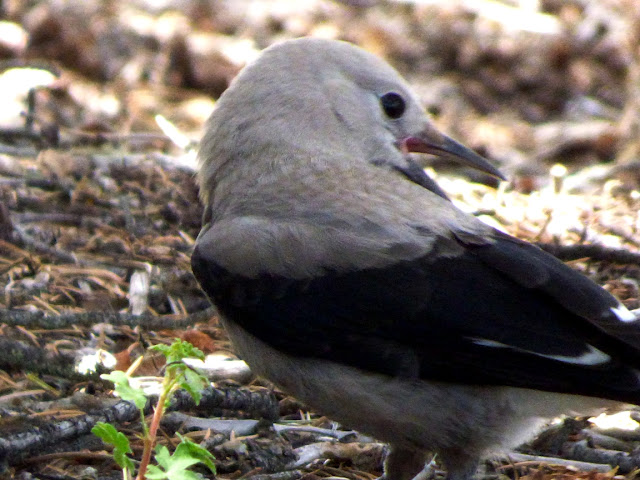 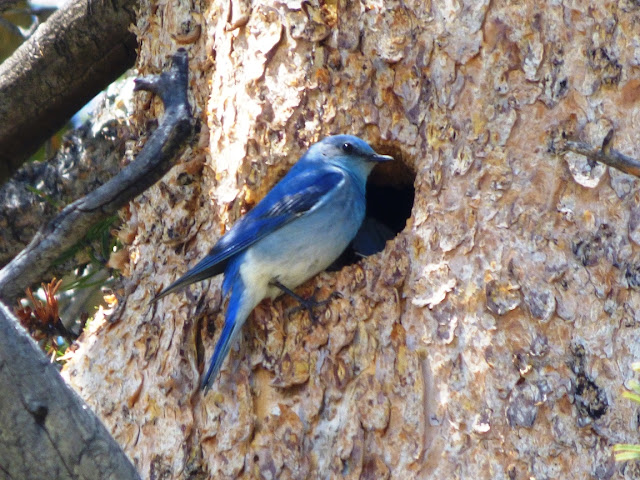 I've never claimed to be the most successful birding enthusiast around. I'm still seeing common birds for the first time. Case in point: today was the first time I've seen a Mountain Bluebird (Sialia currucoides). I've seen their valley cousins, the Western Bluebirds, hundreds of times now, but this was the first time for these brightly colored Sierra Nevada residents. 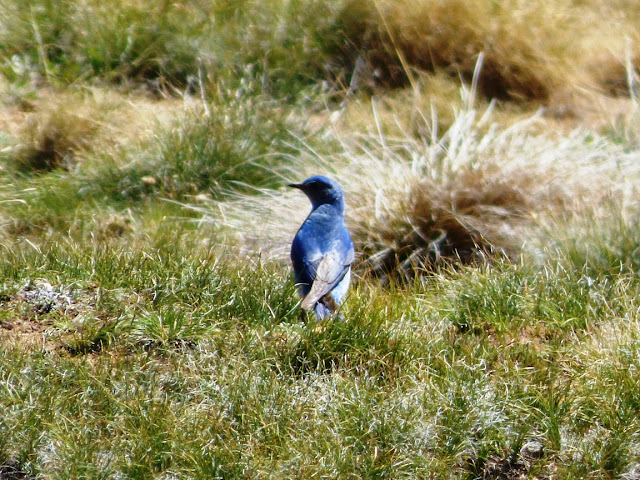 We were on the last day of our nearly two-week excursion across the southwest, and we came home via Tioga Pass and Yosemite National Park. We stopped at Tuolumne Meadows to take in the beautiful scenery when I saw something blue rustling through the grass. It was a bluebird, actually two of them, male and female, and it looked like they we picking up nesting materials. They were moving fast, so I only got a few blurry shots, especially of the female.The fact that her beak was full of grass strands is what told me they were doing nest preparations. 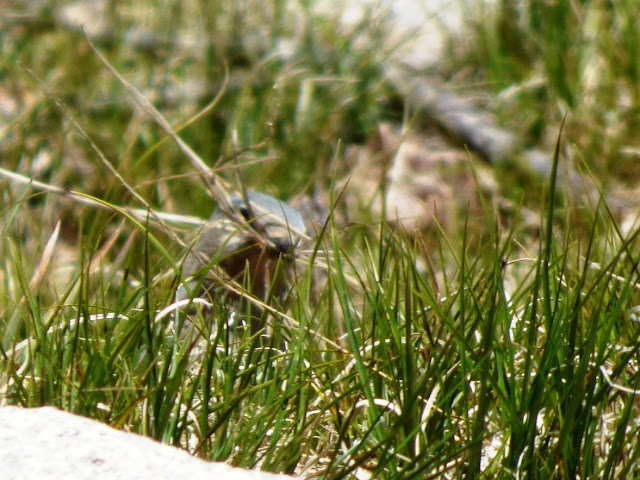 They both suddenly flew up into the tree overhead and I searched until I found the crevice far above that they were using for a nest. The Mountain Bluebirds nest in tree cavities, but they don't carve them. They usually take over abandoned woodpecker holes, and as such are in competition with Tree Swallows. 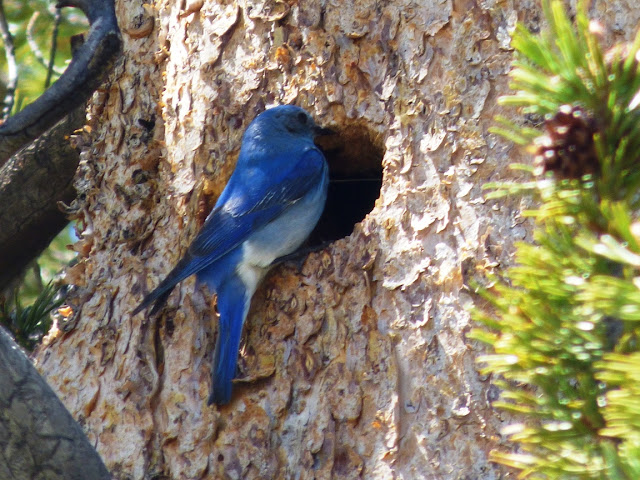 I've always been partial to the color blue, and hope that now that I've seen a pair of the Mountain Bluebirds that there will be many more! It's always a good excuse to head up into Yosemite in any case.
Posted by Garry Hayes at 12:16 AM 1 comment: