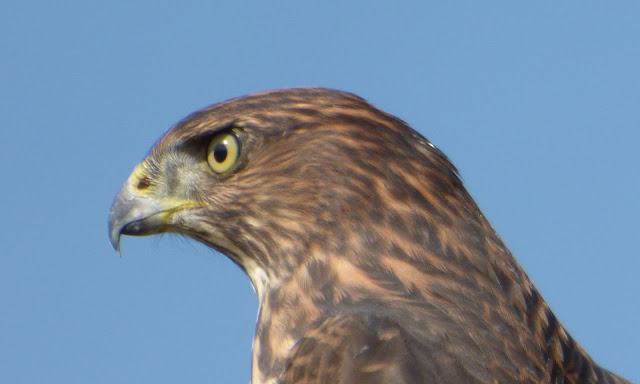 I'm never going to catch up, which is fine because it's better to have lots of material than to not have any. I'm still plowing through my bird pictures from Hawai'i, but I've since been to Washington and Oregon, with a rest stop at the Sacramento National Wildlife Refuge. Lots of birds! But then I've been home for a week, and I went walking along my short stretch of the Tuolumne River. And more birds have been appearing! I've added three to my river trail list, for a total of 52 species (and I know there are many more). In any case, I was walking by a thicket of elderberry shrubs near the sewage treatment plant (as I've said before, not as bad as it sounds), something caused me to look back, and I realized I had strolled right under a juvenile Cooper's Hawk (Accipiter cooperii). It had let me wander within 15 feet without startling. 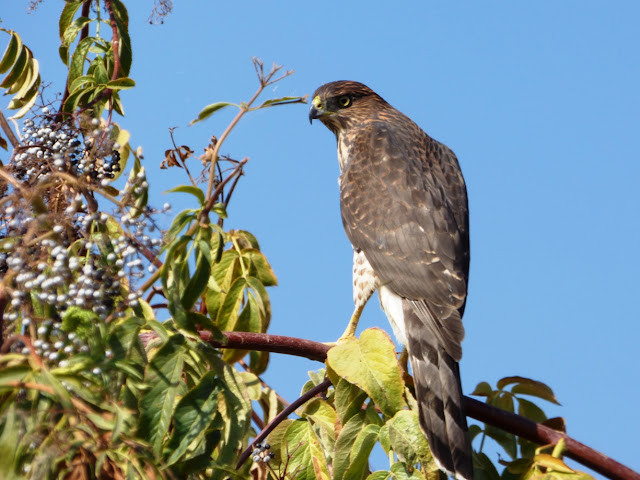 The adult Cooper's Hawks are more gray in color, with reddish eyes. The species is similar in appearance to the Sharp-shinned Hawk, but I'm calling this one a Cooper's because of the rounding of the tail feathers (the Sharp-shinned tail is more squared off).  The species can be found across the entire United States and Mexico, as well as southernmost Canada. 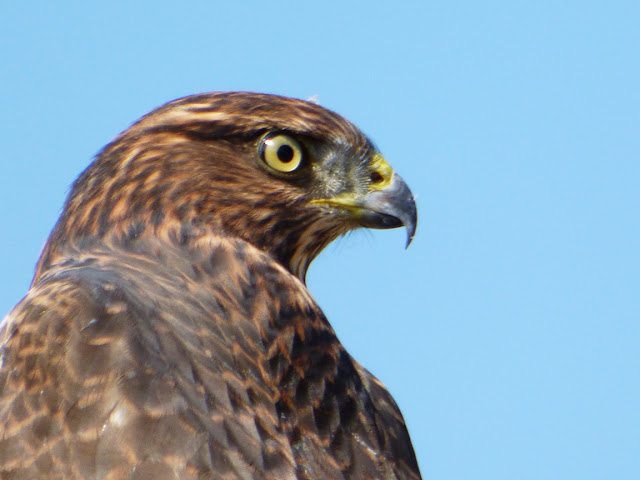 We stared at each other for a few moments. I didn't move closer or anything, but eventually it grew bored with me and wandered off.
Posted by Garry Hayes at 12:00 AM No comments: 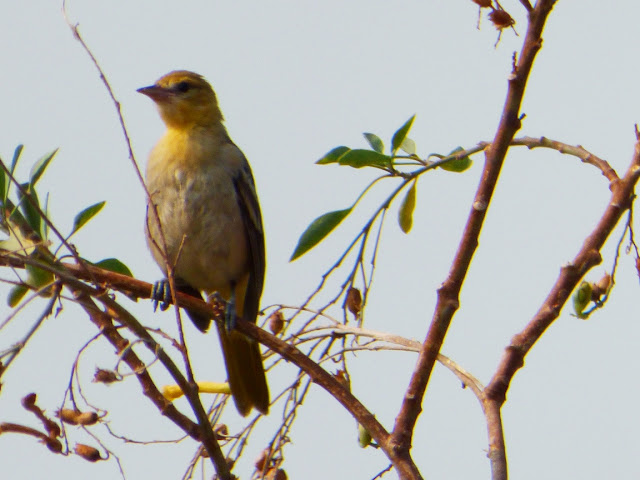 There's this subjective bias that pops up, especially during political years, where the media will comment endlessly about what some public figure is wearing, while more or less ignoring what the person has to say. And needless to say (but I will), those public figures are invariably women. It's especially evident when commentators refer (fairly or not) that a woman is "eye candy". I was guilty of this sort of judgement yesterday, but it had nothing to do with media or politics. 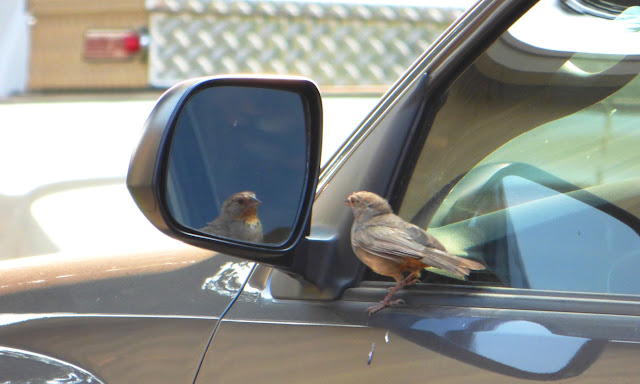 I had a really productive walk along the Tuolumne Parkway Trail where the river flows into the Great Valley. I got close up shots of a juvenile Turkey Vulture, I saw River Otters for the first time in my life, and I watched in concerned amusement (is that a thing?) as what I think was a California Towhee did vicious battle with himself in a car's side view mirror (above). I distracted the poor thing enough to cause it to fly away, and went on.
Then there was some other bird up in the brush, so I snapped a shot and forgot about it as I next saw the otters in the river. Later, I realized it wasn't a finch or a sparrow, and being the amateur that I am, I couldn't find it in the field guides. That's because I wasn't looking for pictures of females! It appears to be a female Bullock's Oriole (Icterus bullockii). In bird world, it is the males who most often are ornately decorated with intense colors, and the orioles are no exception. Mrs. Geotripper and I have seen a couple of orioles in the region, but I've never noticed the females before. Now I'll have to pay better attention, and not be so subjectively biased! 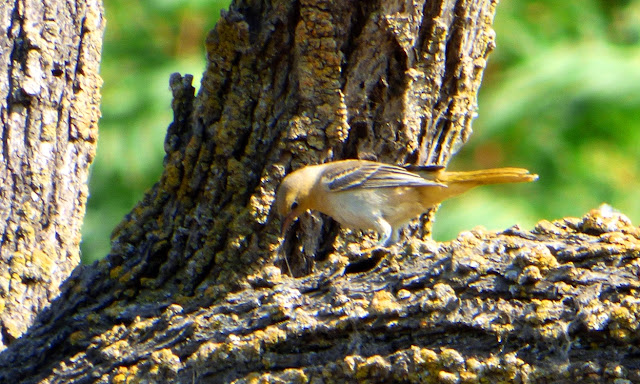 Posted by Garry Hayes at 3:25 PM No comments: 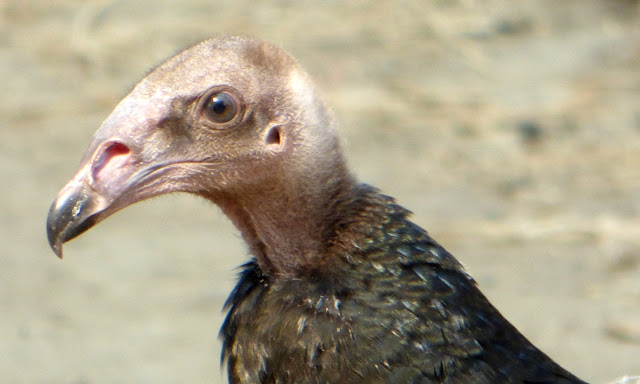 My exploration on the Tuolumne Parkway Trail in Waterford had all kinds of surprises this morning. I saw River Otters for the first time in my life, I saw a sparrow attacking itself in a side-view mirror, and there was this, a juvenile Turkey Vulture blocking the pathway. I was turning a corner on the trail and saw a big black thing, and couldn't tell right away what it was. It had a gray colored head, so I mentally eliminated vulture and thought turkey, but as I drew closer I could see the beak more clearly. It was definitely a Turkey Vulture (Cathartes aura). A few moments of research back at the house confirmed it. The juveniles don't have the characteristic red heads of the adult vultures. 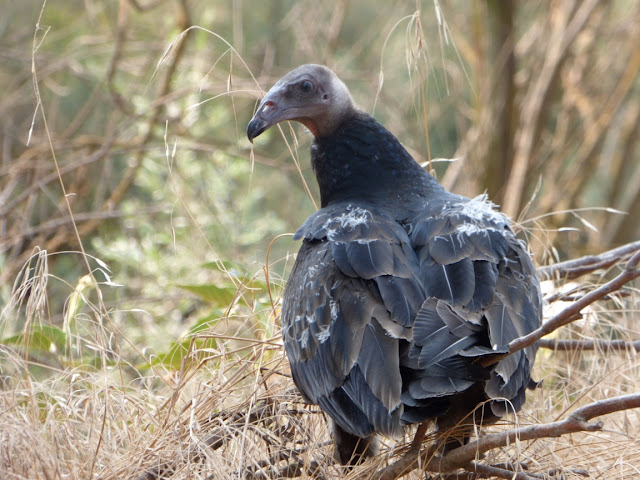 I'm sure it will learn soon enough to be wary of humans. I was worried at first that it was injured as it didn't fly away as I approached. I waited a fair bit of time to let it decide to move out of the way, but eventually I walked forward and it flew into the brush. While I was waiting, a feral cat came out out of the brush and they studied each other for awhile. 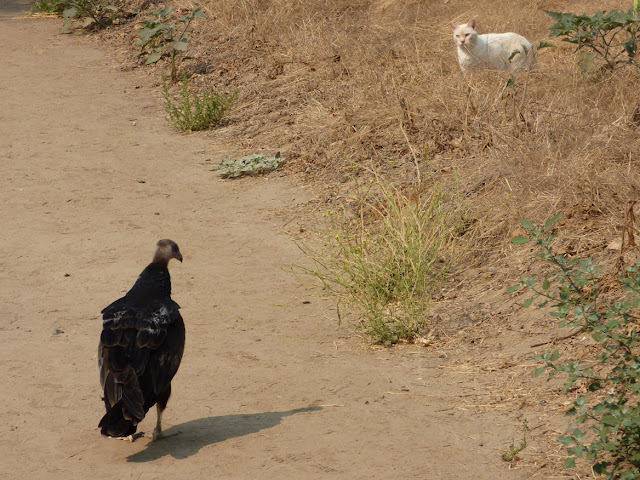 The strange title has to do with what the young vulture was doing when I arrived on the scene. It had something in his/her mouth, and I didn't find out until later on that it was a cigarette butt. That little juvenile delinquent was smoking (sort of)! The concept is a bit funny, but the actuality is a bit worrisome. We leave a lot of trash in the environment, and a lot of it is dangerous to creatures who might get into it. The new trail has been mostly trash-free, but I still have to take a trash bag with me sometimes when I walk. 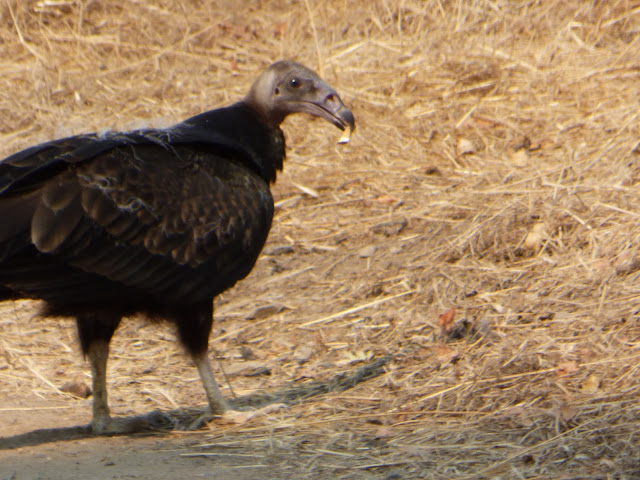 African Silverbills at Laupahoehoe and Kona 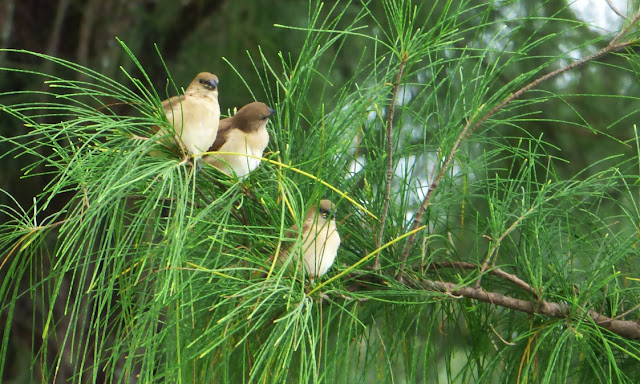 Our journeys through the Hawaiian Islands brought us to the beach park at Laupahoehoe northwest of Hilo on the Big Island. The park preserves the memories of a tragic event in 1946, a tsunami that took the lives of 20 schoolchildren and four teachers (story here). I wandered towards the beach area and saw a small flock of African Silverbills (Lonchura cantans), also known as Warbling Silverbills. 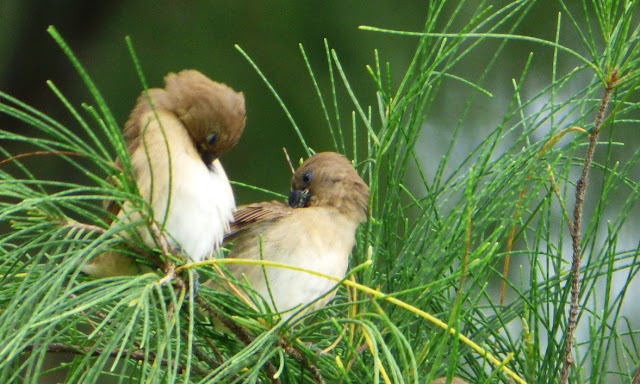 Most of the birds that one sees in the urban and coastal settings are not native to Hawai'i, and that is the case here, if you couldn't figure it out from the name. The birds seem to have arrived in the 1960s, probably as escapees from pet owners. They have spread throughout the entire island chain. I saw others on the road to Kona below Saddle Road (below). 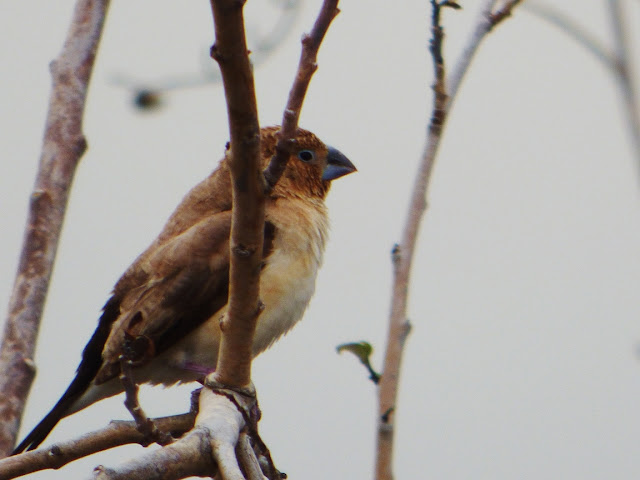 Posted by Garry Hayes at 4:11 PM No comments: 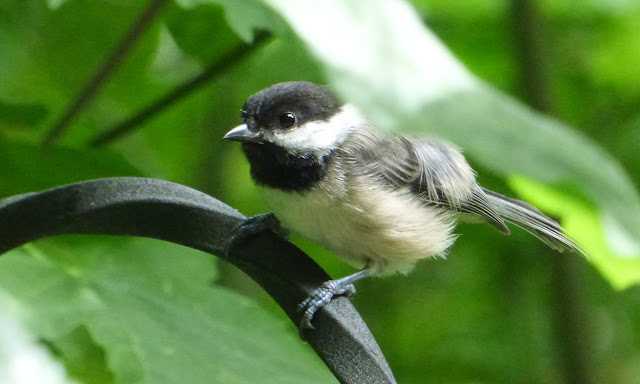 Today's bird is not a regular in California, though it is reported sometimes in the extreme north of the state. The Black-capped Chickadee (Poecile atricapillus) ranges across North America, but mostly in the northern tier of states and Canada as well as Alaska. Obviously, then, I'm not in California. We were at Seward Park on Lake Washington in Seattle. The bird is common up this way, but it's the first time I've ever seen one.

The Cornell bird site describes the species as curious and unafraid of humans, which seemed true enough, seeing as how this one allowed me to take pictures in fairly close quarters (I was about 10-12 feet away). For such small-brained creatures, they have extraordinary mind power, being able to accurately store the location of thousands of hidden seeds in their memories. They also have complex calls that resemble language, used in identification of different flocks and the presence of predators.

And they are cute... 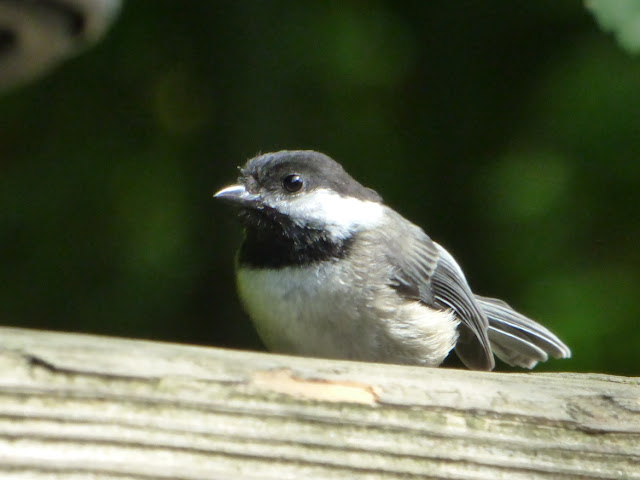 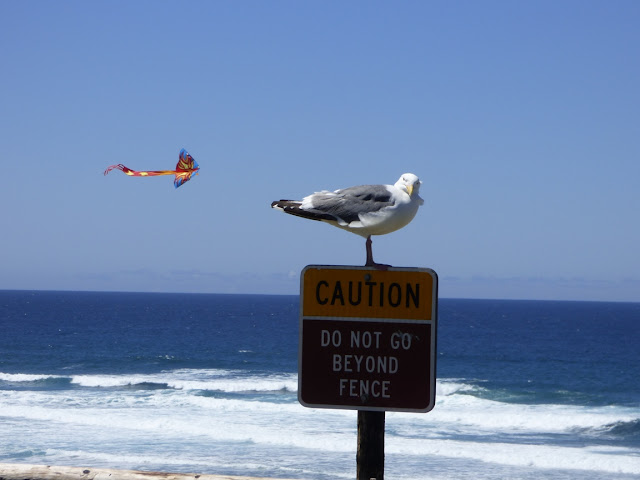 I'm on the road (again), so posts are sparse. I still have a fair number of Hawaiian birds to share, but in the meantime, here's a Western Gull (Larus Occidentalis) from Road's End Park in Lincoln, Oregon. Gulls are notoriously easy to photograph, as they about as in your face as a bird can be, so it doesn't usually feel like a challenge to get a picture of one. I liked the symmetry, or lack thereof, between the bird, the kite, and the sign.

The Western Gulls are common along the western (surprise!) U.S. coast from Alaska to the tip of Baja California, where they live on fish, invertebrates, and stuff they steal from picnic tables. They can live to thirty years or more. 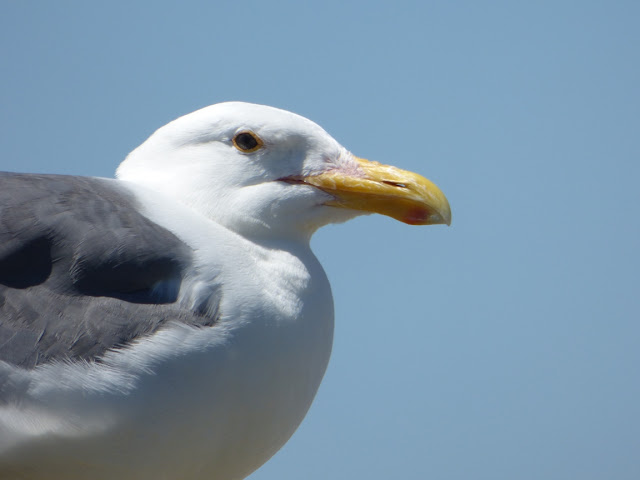 Posted by Garry Hayes at 7:21 PM No comments:

Common Waxbills at Kona on the Big Island of Hawai'i 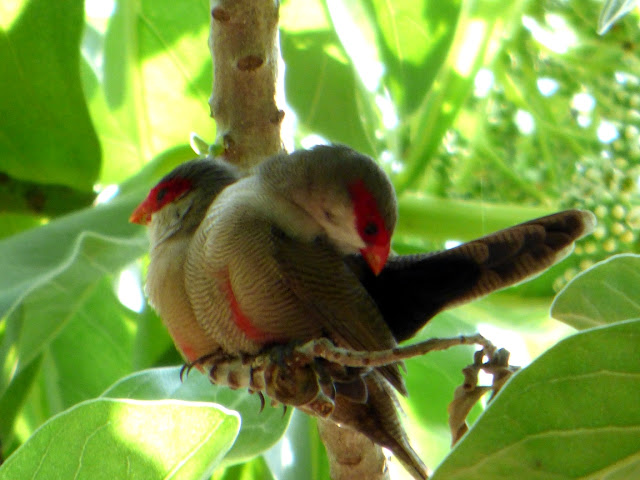 It's a week of ugly and tragic news. I'm not ignoring it, I'm following closely. But I'm also choosing to find some small bit of beauty in the midst of tragedy.  Common Waxbills (Estrilda astrild) are native to Africa south of the Sahara Desert, but they were introduced to the Hawaiian Islands in fairly recent time, the 1970s. They were first noted on Oahu, but showed up in the Kona area on the Big Island only in 2002 or so. They feed mainly on grass seeds.

We saw these Waxbills at Maka'eo Jogging/Walking Path at the Old Airport Park just north of Kona on the Big Island. A small bit of beauty. 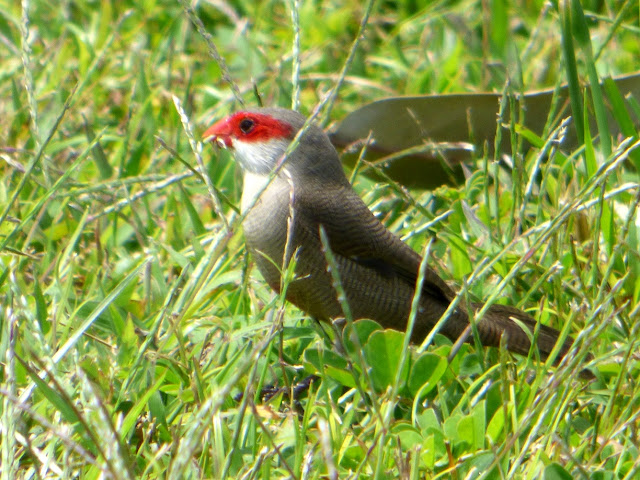 Yellow-fronted Canary on the Big Island of Hawai'i 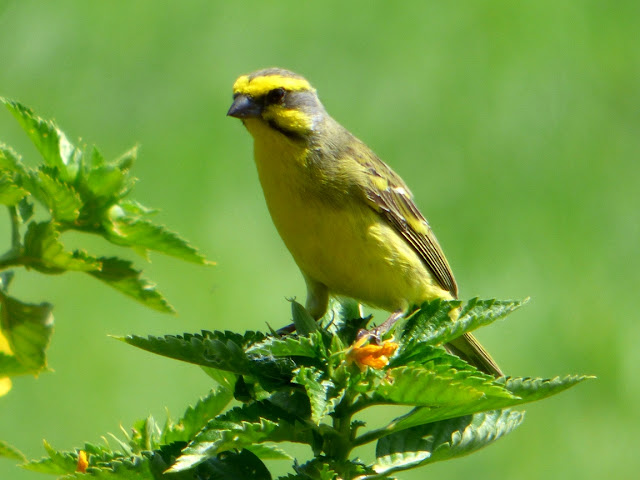 The Hawaiian Islands are host to a great many bird species, but few of those seen by island visitors are native to the islands. When humans reached the islands, they brought animals and bugs that had a devastating effect on the original ecosystem of the islands. Rats, cats, and mongoose preyed on the natives species, but even worse, introduced mosquitoes brought avian malaria to which the native birds had no resistance. So few native birds remained in the coastal cities that well-meaning people released colorful tropical birds in the islands to take up the slack. 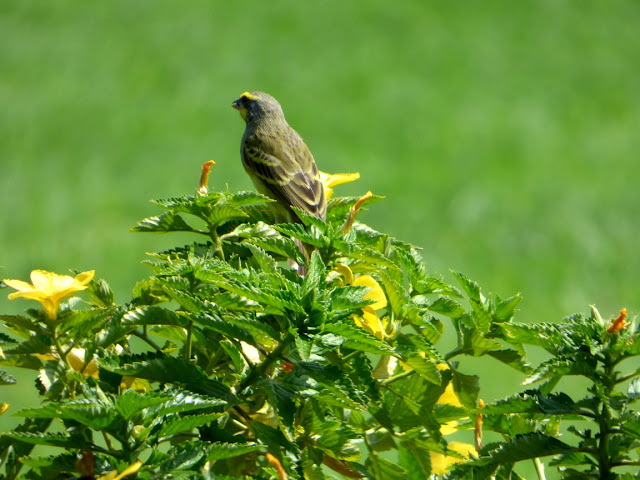 The Yellow-fronted Canary (Serinus mozambicus) arrived on the islands in the 1960s. Also called Green Singing-Finches, they've been popular as pets, but originated in Africa in the region south of the Sahara Desert. They do well in arid woodlands, which makes them an ideal match to the Kona Coast where I got these pictures on our recent trip. 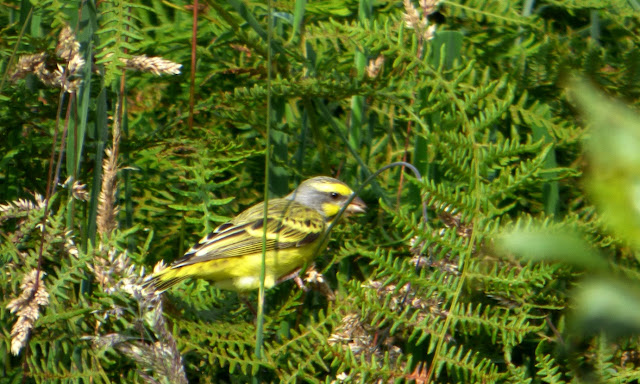 The canaries spread and by the early 2000s had reached Humu'ula, the pass between Mauna Loa and Mauna Kea. I saw one of them while exploring Pu'u Huluhulu, a cinder cone kipuka at the pass on my trip last month (above). 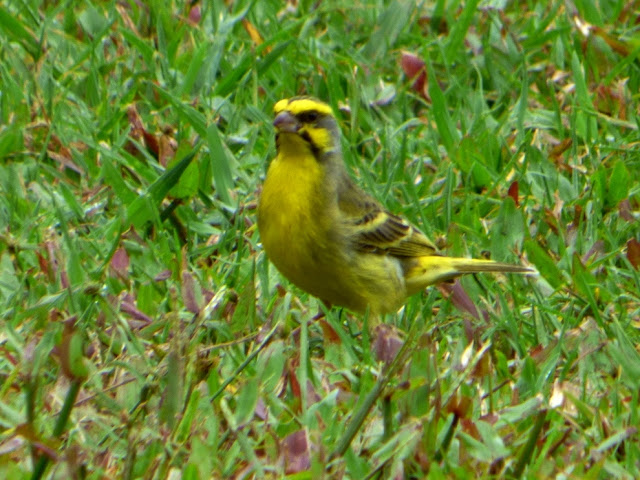