Why are they called Golden-crowned Sparrows? 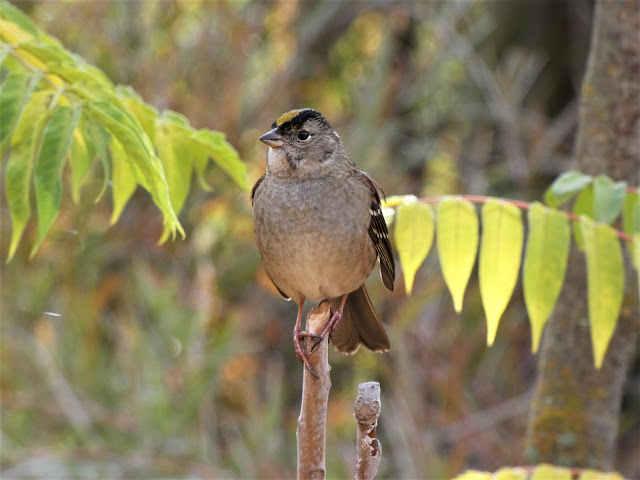 We're not afraid of asking the tough questions here at Geotripper, and sometimes we might even answer them. Today it's about the Golden-crowned Sparrow (Zonotrichia atricapilla): Why do we call them that? The answer: they are sparrows, and they tend to have golden crowns! It's a little more vivid during the breeding season, but the sparrow I ran into yesterday had one, however faded. I was on my normal walk along the Tuolumne River Parkway Trail. 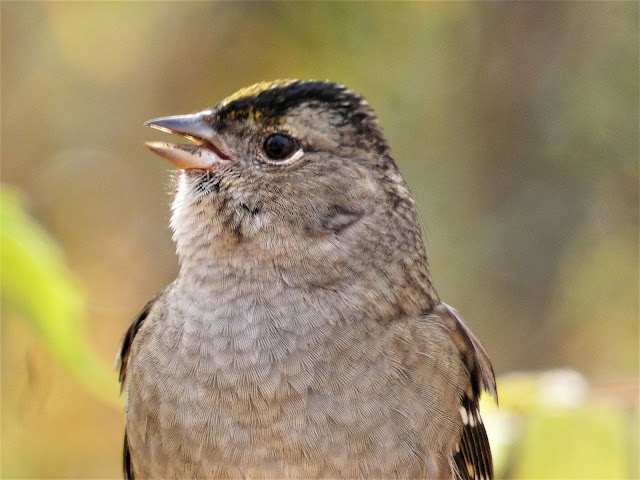 It turns out that even though the sparrow is relatively common in our area, and I've been doing this blog since 2014, I've only once devoted a post to this attractive little bird. This individual decided to change that. The Golden-crowns are migratory birds, spending the summer in the far north. They only started arriving back in our region in the last few weeks. I'm really bad at remembering the songs of most birds, and heard a mostly unfamiliar song in the brush. I suspected it might be a Golden-crowned Sparrow, so I quietly played the song on my phone, and out came this bird, which perched at my eye level, and started at me. It didn't move while I took one shot after another. 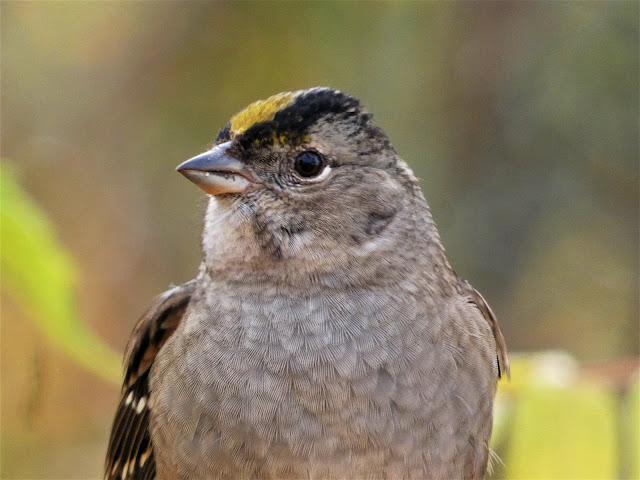 Those of you who don't live on the Pacific Coast might not recognize this sparrow. It is closely related to the White-crowned Sparrow that is found across North America, but the Golden-crowned only occasionally wanders east of the Sierra Nevada and Cascades, although there have been rare sightings on the Atlantic Coast states and elsewhere. According to AllAboutBirds, the sparrow is one of the more poorly studied species in its Arctic summer home. Maybe there is a job for a budding ornithologist there... 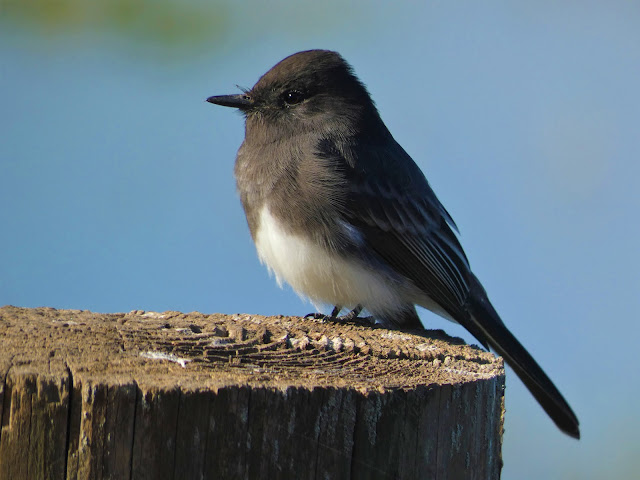 We've been journeying down south to the Merced National Wildlife Refuge every weekend for the last month, watching for the arrival of the winter migrants from the Arctic. The Sandhill Cranes and Greater White-fronted Geese have started to arrive in some serious numbers, but on the whole it has been relatively quiet. In a few weeks there will be tens of thousands of geese and the quiet reserve will become a cacophony of arguing squawkers. In the meantime we've been enjoying the serenity and the chance to catch some of the smaller birds who normally get lost in the chaos. Those include a couple of flycatchers who aren't called flycatchers, the Black Phoebe (Sayornis nigricans) and the Say's Phoebe (Sayornis saya).

The Black Phoebe is one of my dependable favorites. I see them often on my home turf, and they are tolerant of the bumbling human with the camera. They display typical flycatcher behavior, that is 'fly-catching'. They'll pick a perch, sally forth to acrobatically nail a fly or other insect, and then perch again in the same spot. The Black Phoebes are primarily southwestern birds who mainly live in riparian habitats. In 2019 I saw a particularly memorable individual, a leucistic Black Phoebe, meaning a Black Phoebe that wasn't black at all. 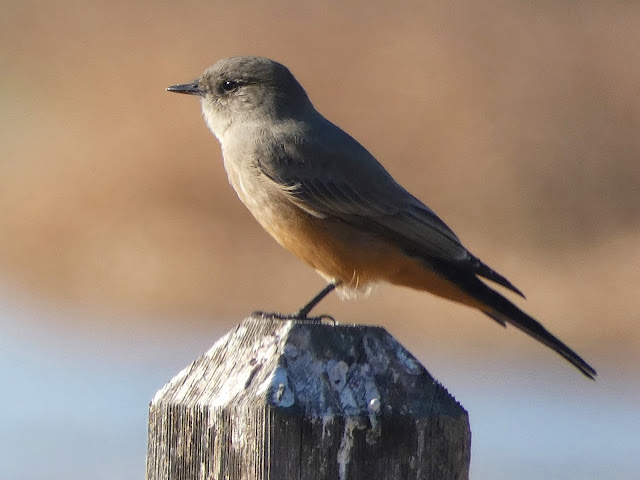 The other flycatcher that I see regularly at the refuge is a Say's Phoebe (Sayornis saya). I've probably been watching the same individual for the last month, since it has occupied the same fencepost every day we've visited the refuge. I see this species far less often back home, so it's always a treat to see one on the road. The species is far more widespread, with a range that extends into the Midwest, and all the way to Alaska. Errant birds have been sighted all the way to the Atlantic Seaboard. It ranges farther north than any other flycatcher.

So cue the big birds, the Snow and Ross's Geese, and the Cackling Geese. It's going to be a raucous party soon!

Posted by Garry Hayes at 9:16 PM No comments: