'Io, the Hawaiian Hawk at the Pololu Valley on the Big Island 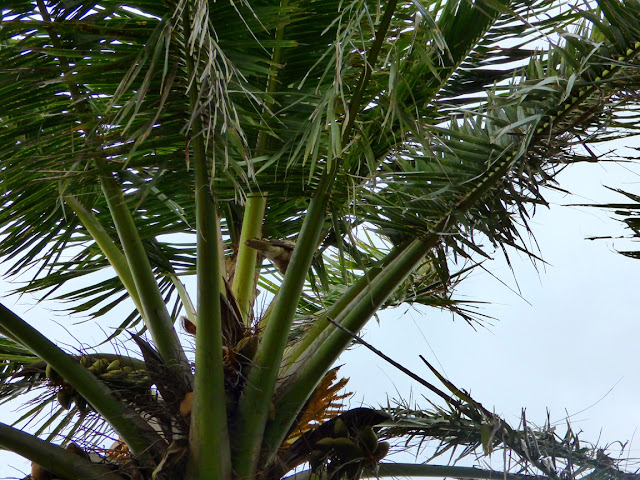 It was on my very first trip to the Hawaiian Islands that I started paying attention to birds, in large part because of the presence of a Hawaiian Hawk, or 'Io, at the Hilo Zoo. It immediately raised questions, mainly, how in the world did a hawk get to Hawai'i? They aren't shorebirds, and they can't swim, so at least once, a small group (or a pregnant female) got knocked off course, and kept soaring until they were lucky enough to sight land. Ever since the day I saw the Hawaiian Hawk (Buteo solitarius) at the zoo in 2002, I've wanted to see one in the wild. It took a long time. 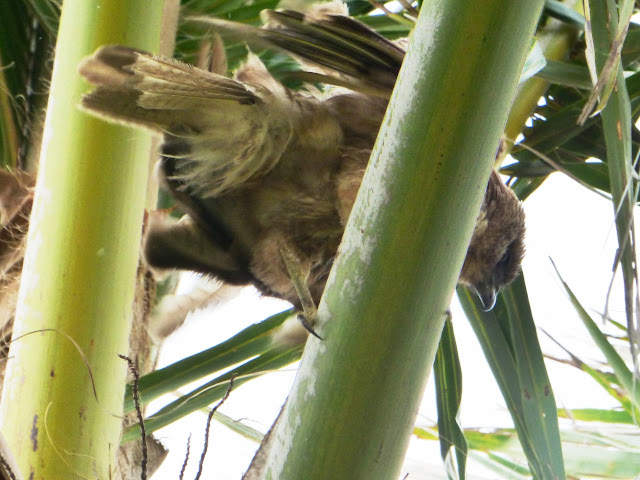 I was with my students a few weeks ago at the Pololu Valley trailhead at the north end of the Big Island when I heard an unearthly screeching from right over my head in a coconut tree. I looked up and saw what I momentarily assumed was a pigeon, but in a split second I realized it was too big. I was trying to recall what kind of large bird would be perched in a coconut tree when it struck me: Hawk! I was immediately struggling to bring my camera around, but a pair of Common Myna Birds didn't want the hawk around. They chased it away before I snapped more than a pair of pictures. I got one of the hawk soaring above. 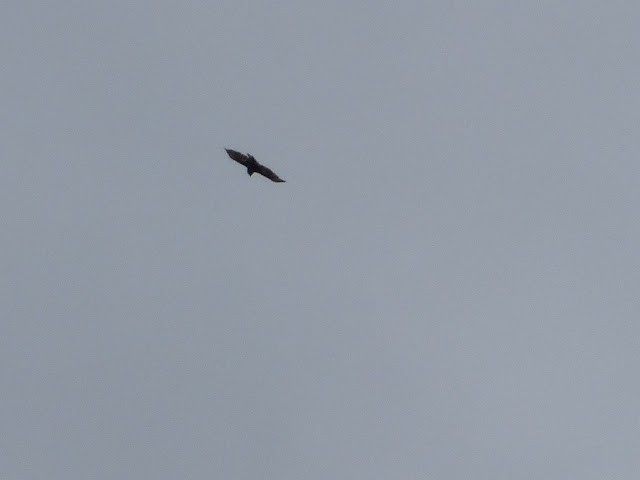 Although fossils of the hawk are known from Kaua'i, Moloka'i, and Oahu, they only live today on the Big Island, where they feed on insects, birds, and introduced rats. They are on the endangered species list, but their population seems to be stable at around 3,000 for the last 20 years.

A Reasonably Polite Invader in Hawai'i: The Zebra Dove 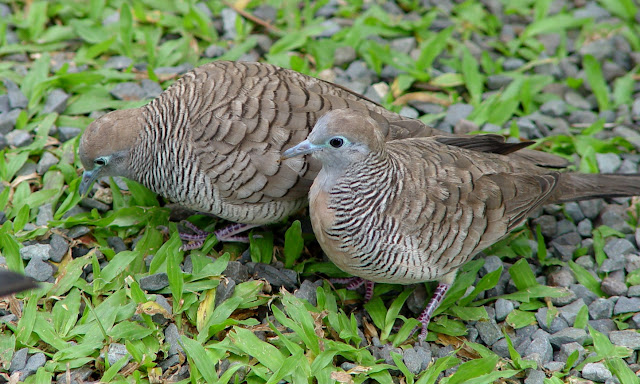 There is a cooing sound that starts the day in the lowland towns  of the Hawaiian Islands. It doesn't take long to identify the singer: it's the Zebra Dove (Geopelia striata). Even if one misses their morning song, they'll make themselves known as you try eating in a park or outside diner. They are one of the most common birds seen in Hawai'i. 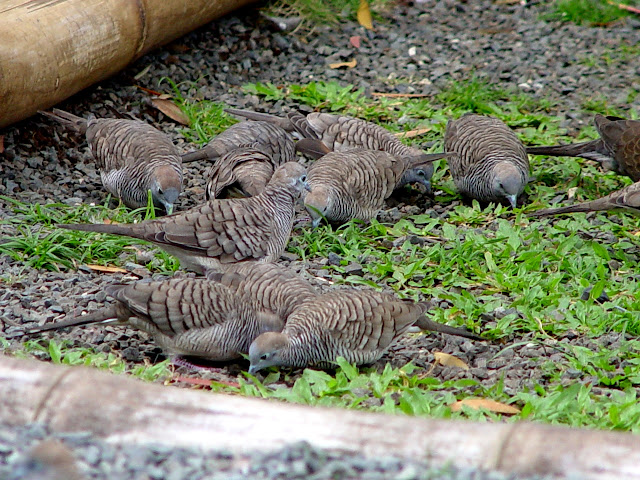 The Zebra Dove arrived at the islands in 1922 in a shipment from Singapore. They are native over a wide swath of southeast Asia. They quickly established populations on all the islands almost to the point a being a nuisance (but most of them have been polite to me!).
As almost always happens, I took practically no pictures of the single most common bird I saw during my recent trip! The first two pictures are from an earlier journey on Oahu, the third is from Mrs. Geotripper from the Kona area, and the fourth (below) is a shot I took at Kona as well. 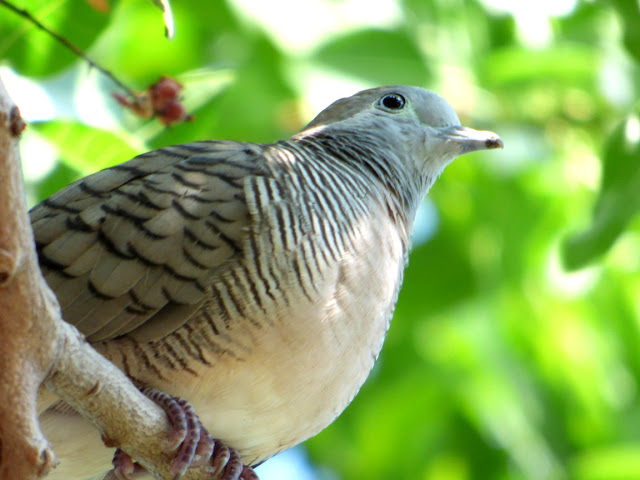 Posted by Garry Hayes at 9:12 PM No comments:

The Piha `Ekelo or Manu `Aipilau ("Trash-eating Bird", "Full of Voice"), the Common Myna of Hawai'i 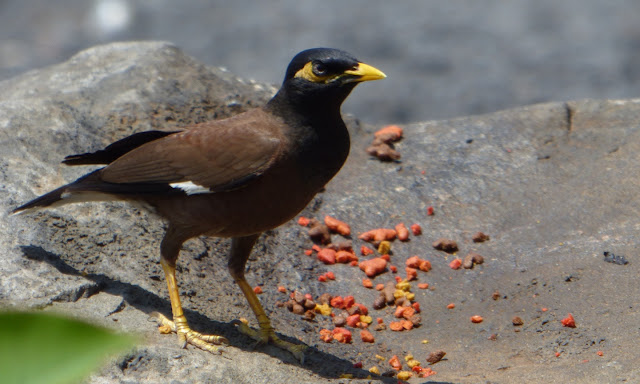 It is quite literally the first bird you will see as you emerge from the airplane when you land anywhere in the Hawaiian Islands. They certainly look tropical and exotic at first, but as you go along in your travels, you will realize that they are ubiquitous, found in nearly every environment, whether in coastal areas, or high into the island interiors. They are known to the Hawaiians as the piha `ekelo (full of voice) and manu`aipilau (trash-eating bird). The biologists call it the Common Myna (Acridotheres tristis tristis). 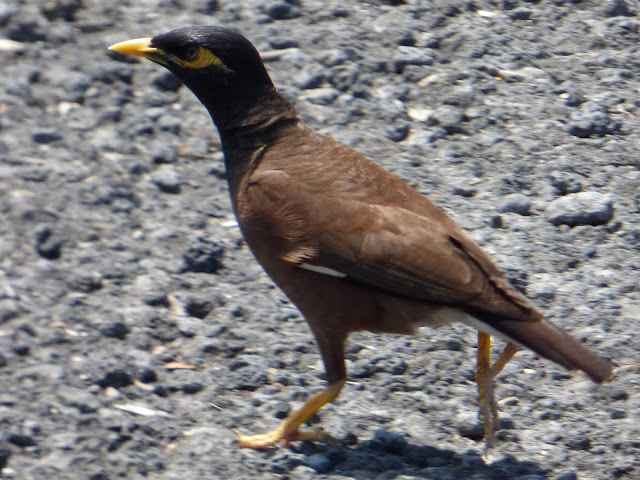 The birds arrived at the islands in 1866 (most sources say 1865) to fight an infestation of cutworm moths. The effort was successful, but once the moths were gone, the birds went on to other food sources of all kinds. They have been castigated for spreading avian diseases, stealing nesting sites from native birds, predating seabird nests, and for having a call that resembles fighting cats. They've also been accused of burning down buildings (by snatching lit cigarettes and flying away with them). On the other hand, they are intelligent and can be comical to watch. 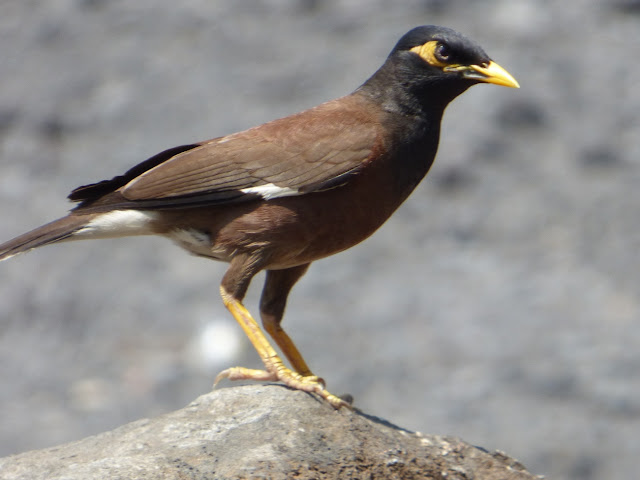 Through no fault of their own, European Starlings were introduced in North America, and spread to dominate environments all over the continent. I was surprised to find that the mynas are in the starling family, and so their story in Hawai'i seems all too familiar.
Posted by Garry Hayes at 7:37 PM No comments: 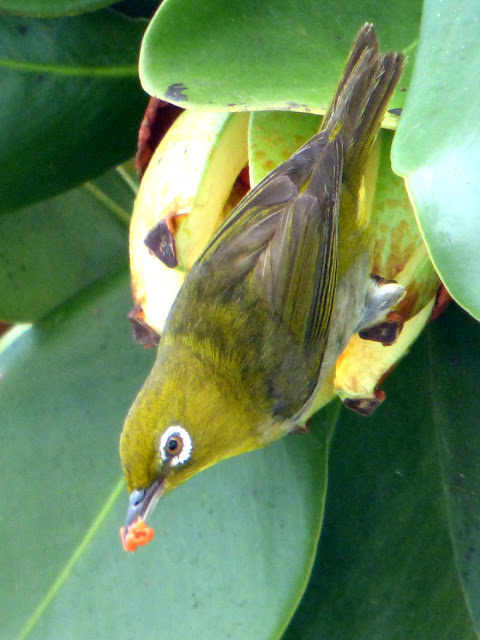 Bird-watching in Hawai'i can be frustrating. There are a great many colorful and easily seen birds, and there is the quandary of knowing that most all of them are introduced and invasive species. The native birds are rarely seen, as they have drastically decreased numbers, and have been driven into last stands in the high elevation forests. Many of them have gone extinct already. 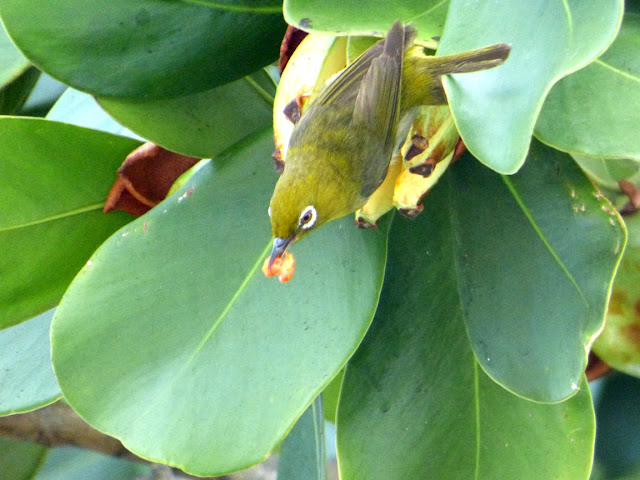 Bird malaria is one of the worst causes, but there are many others. By the 1920s, so few native birds were found in the coastal towns that well-meaning people brought in tropical species to fill the void. Other birds were introduced to help control insect pests in the pervasive sugar cane fields. One can see the point of choosing non-native birds versus no birds, and one can also realize the lack of research that would have warned against introducing new species without understanding the potential negative effects. 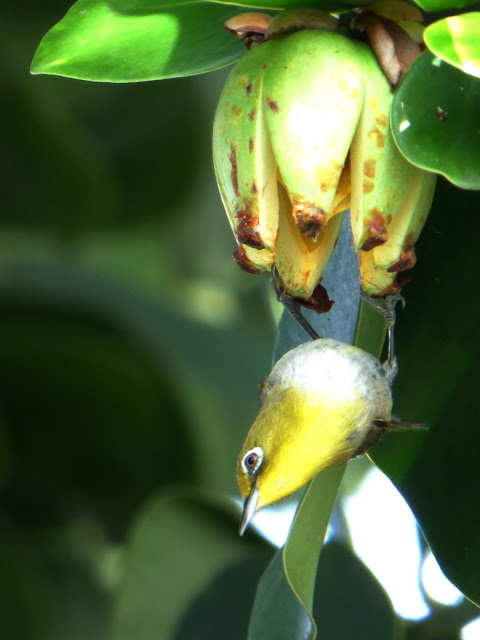 Probably no bird illustrates the quandary so well as the Japanese White-eye or Mejiro (Zosterops japonicus). It arrived on the islands in the 1920s and 1930s for insect control purposes, and for better or worse it was a perfect fit for Hawai'i. It spread beyond the cane fields and into the montane forests, and is now the most populous land bird on the island. It is omnivorous, meaning it competes with numerous other native birds for insects and fruits. It may be a vector for bird diseases.
And yet...it's a beautiful bird, and fun to watch as it hangs upside down to snatch seeds.  It's said to be a beautiful singer, and there is emerging evidence that it might have become a pollinator for some native Lobelioid species whose original pollinators have gone extinct. Endangered native Hawaiian Hawks have started preying on them.

In any case, they are on the islands to stay, for better or worse. And they may be filling the environmental niche left behind by the sadly extinct native birds. And if you think about it, the most populous bird on the island could have been something far more obnoxious (I think of European Starlings on the mainland, for instance).
Posted by Garry Hayes at 6:39 PM No comments:

Saffron Finch on the Big Island of Hawai'i 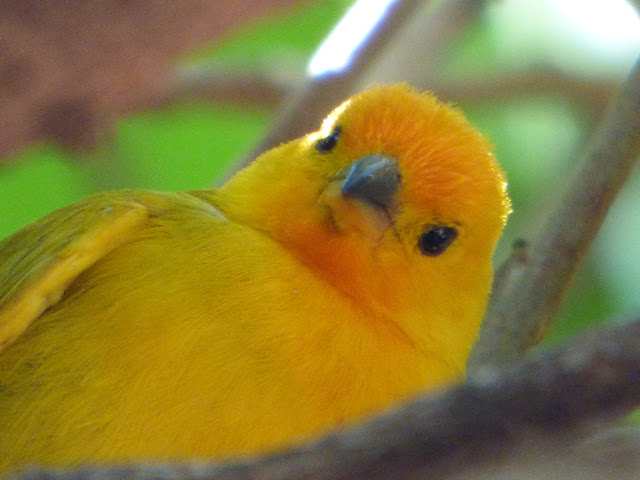 We are going outside of California for awhile, since I was overseas on the Hawaiian Islands, and to say that there are lots of birds there is an understatement. There are lots, and only a few are at all familiar to Californians. There are both native birds and introduced (even invasive) species, and the introduced birds are the most visible. You really have to work at seeing the natives, as they have been driven into the high elevation forests for reasons to be discussed later. 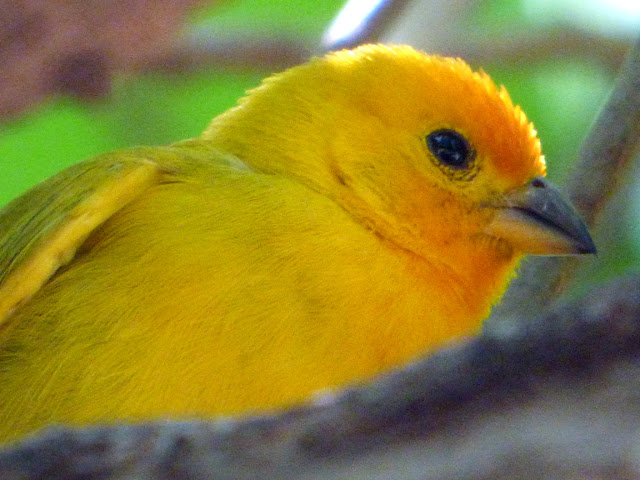 In the meantime, the introduced species provide a splash of color to the exploration of the islands, and one of the most striking birds one can encounter is the Saffron Finch (Sicalis flaveola). It is a tanager that is native to the Amazon Basin in South America (it certainly bears some resemblance to the Western Tanager back home in California). 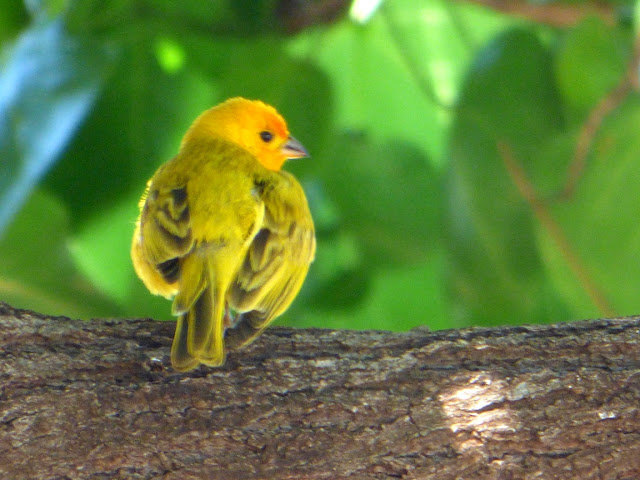 The Saffron Finches are popular cage birds, and that is the probable explanation for their existence in the Hawaiian Islands. They were first noted in the 1960s and were most likely escapees. They are common on the Big Island, and increasing in Oahu as well. 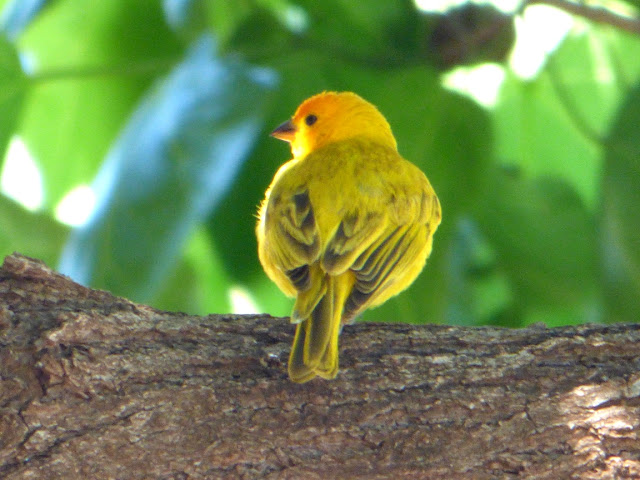 I encountered several of the finches at our first hotel on the day of our arrival, but it wasn't until several days later that we were exploring Lapakahi State Park on the northern coast that we saw one up close. Lapakahi preserves an ancient fishing village. We spied the finch "hiding" in a tree above a burial site ("hiding" is a strong term for such a colorful bird). 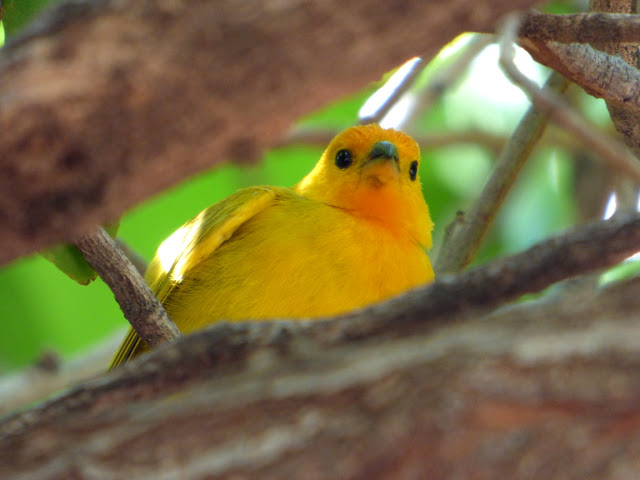 Later on we stopped in Kapa'au on the northern tip of the Big Island, and had another finch land nearby the group. I like the color contrast with the red paint on the roof. 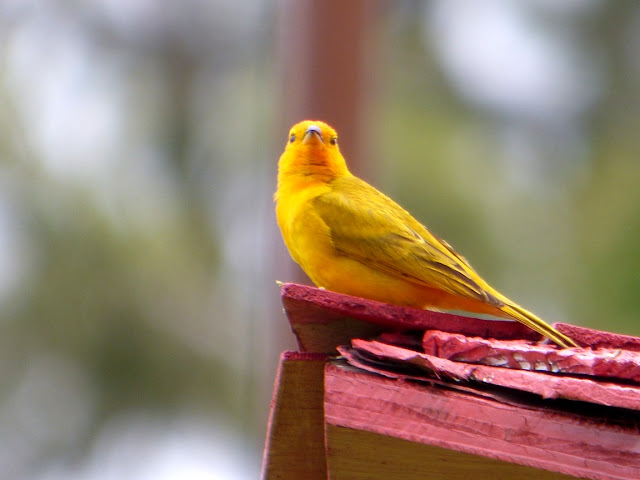 Expect a lot more colorful birds in coming weeks. There were a lot of them out there!
Posted by Garry Hayes at 5:33 PM No comments: 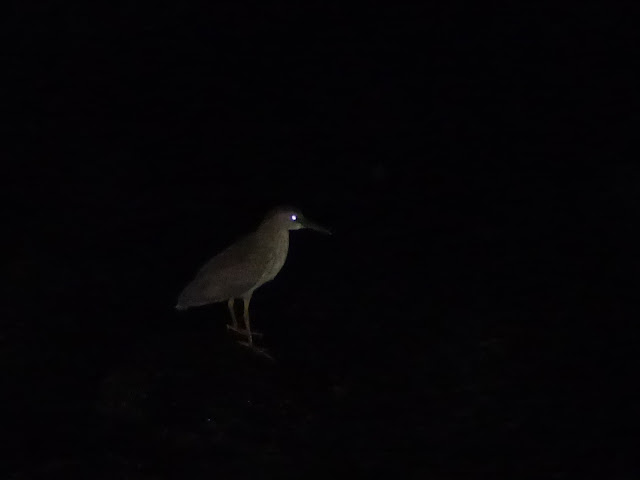 What happens when you take a flash picture of a bird standing on black basalt surrounded by black water at night? This. It's one of the native birds of Hawai'i, a Black-crowned Night-Heron (Nycticorax nycticorax hoactli). The bird is pretty much the same as the night herons found across the Americas, but it does stand out on the Hawaiian Islands as one of the few native species that can be sighted in the urban areas of the state. They are doing okay as a species, but there are only a few hundred of them, so their future is not assured. 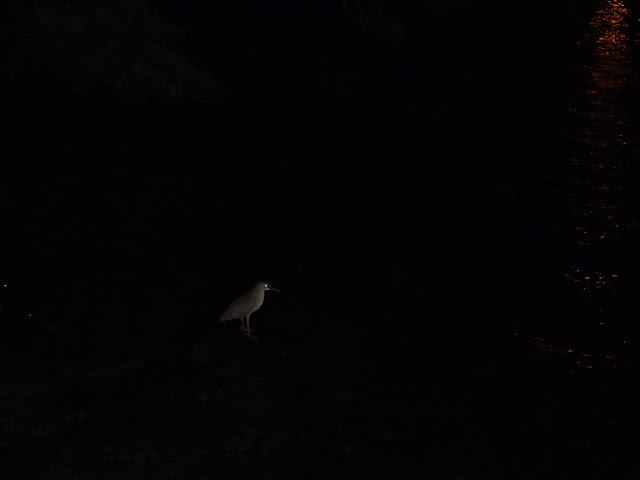 Posted by Garry Hayes at 1:44 AM No comments: