Tanagers on the Tuolumne! 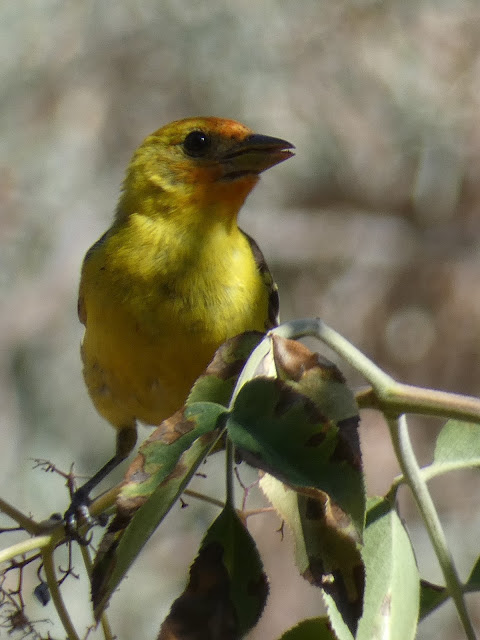 I'm trying to put together a few posts on the birds I saw while traveling in the Pacific Northwest, but I keep getting interrupted by beautiful birds more or less in my own backyard. I've been taking my customary walks early in the morning along the Tuolumne Parkway Trail, and there are plenty of pretty birds about, but not a lot of surprises this week. Well, except for this morning when I saw a Western Tanager (Piranga ludoviciana) in the oaks at the west end of the trail near the stairwell. I'm 90% sure I saw a female yesterday, but didn't get any pictures.

It's just a little bit unusual to see them on the valley floor at the height of summer. The tanagers tend to be a mountain species, and are more common in the forests of the Sierra Nevada at this time of year. They'll become more numerous next month as they start migrating south to Mexico for the winter. They are one of my favorite birds because, frankly, I'm attracted to bright coloration! 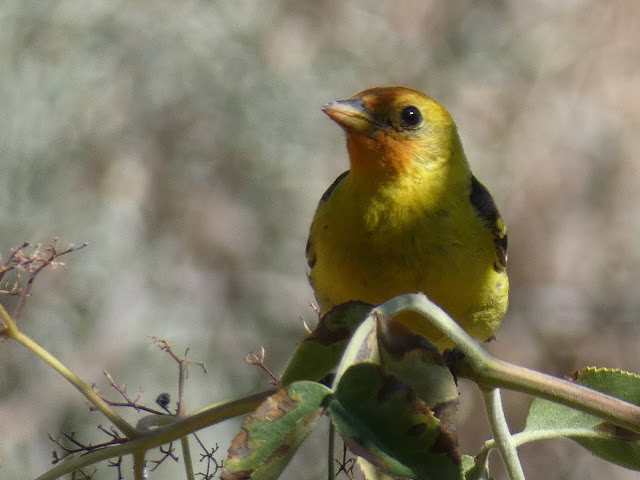 Posted by Garry Hayes at 2:23 PM No comments:

One Species or Two? The Grebes of the Sacramento National Wildlife Refuge 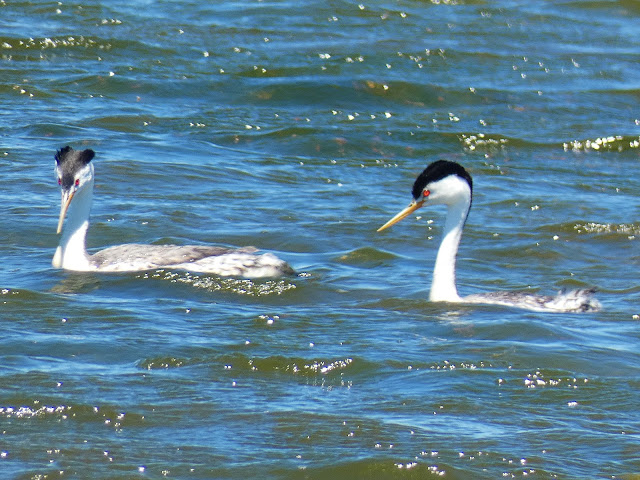 One of these is not like the others. Can you tell which one is which? 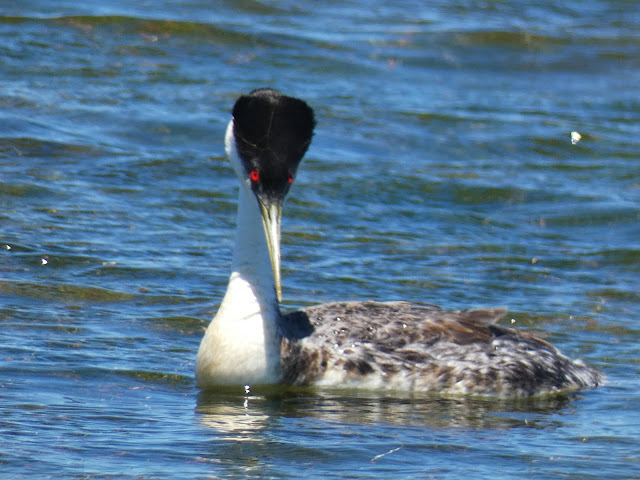 The concept of a species has apparently always been a problem in biology. The definition I was taught, the idea that a species is a group of organisms that can produce viable offspring, is a real problem in my own field of geology and paleontology. How can we know if a species was capable of successfully reproducing from fossil evidence? We depend on the morphology a great deal, but it often produces problems. Consider what future paleontologists will think about fossils of all the dog breeds in existence...would a Chihuahua be considered the same species as a German Shepherd? There are debates about whether the large number of species of ceratopsian dinosaurs might actually be growth stages of a single species. 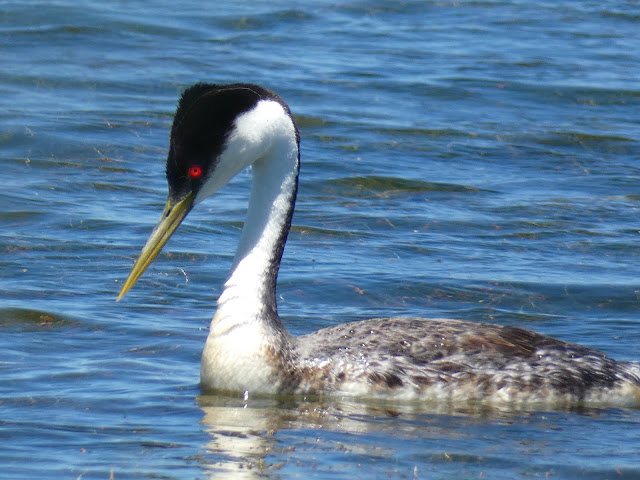 As we learn more, the idea of boundaries between species becomes even more uncertain. There are some species that are more closely related than others, and hybridization is a common phenomenon. Such hybrids may be a powerful driver of evolutionary change. Which brings us to these unique birds in the pictures today. They include a single picture of some Clark's Grebes (Aechmophorus clarkii), and some Western Grebes (Aechmophorus occidentalis). We saw them in the ponds of the Sacramento National Wildlife Refuge near Willows, California, on the first day of our recent journey through British Columbia and northern Washington state. What criteria did you use to distinguish between the two? 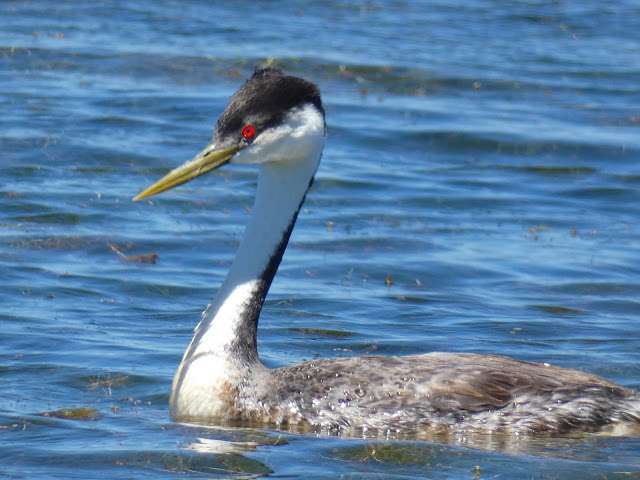 Biologists considered them to be the same species until 1985, when they split them because they didn't tend to interbreed, had different calls, occupied slightly different niches in their wetlands environments, and on major differences in their DNA sequences. The Western Grebes are more numerous (~110,000 vs ~11,000), but both are threatened by loss of their wetland environments. The most visible differences are the eyes, which are surrounded by black in the Western Grebe and white in the Clark's Grebe. The beak of the Clark's Grebe is brighter yellow while the Western's is more olive in color. 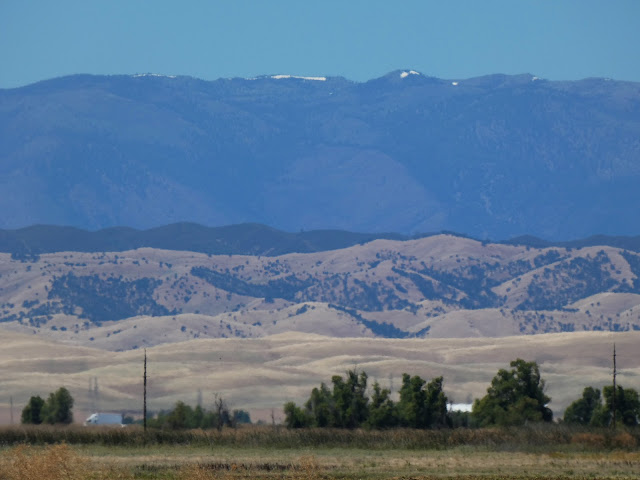 The Sacramento National Wildlife Refuge is one of our favorite birding spots. It has spectacular seasons in fall and winter when the migrant ducks, geese, and cranes arrive from the Arctic. The birds gather in flocks 10,000 strong, and few sights are as memorable as seeing all of the Snow or Ross's Geese taking off at once. Summer is much quieter, but is a good time to view the year-round species and the raptors. I noted 26 different species on our late June visit.
Posted by Garry Hayes at 10:36 PM No comments:

The Babies are Growing Up! Hooded Oriole on the Tuolumne River Parkway Trail 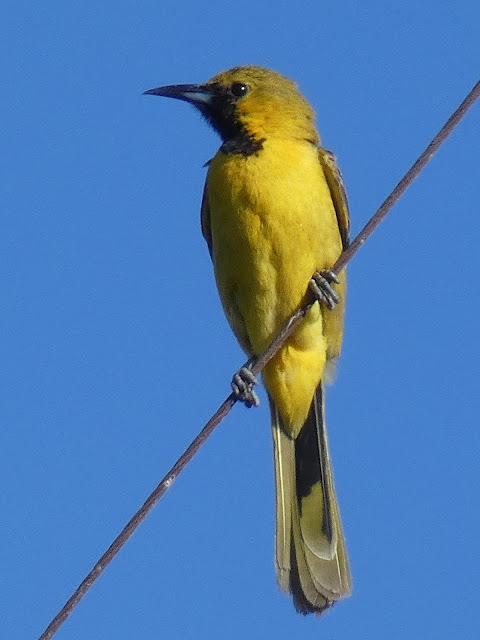 Time passes quickly when you're having fun...or you're traveling thousands of miles. I've been on the road for four of the last five weeks, and when I wasn't traveling, I was unpacking and packing again. Somehow it's been a month since I last posted any birds!

I've been thinking a lot about home since I was away so long. I've been watching a group of Hooded Orioles along the bluffs above the Tuolumne River since last spring. They had a nest somewhere in a group of palm trees, and I've seen at least three individuals at one time or another. This morning it was an immature male that I assume was one of the babies. Those palms were home for these birds, and so far for this male, it has been the only home it has ever had. But that will change in a matter of weeks. Hooded Orioles are tropical migrants, and they will soon be flying south for winter in their other home somewhere in Mexico or Belize. 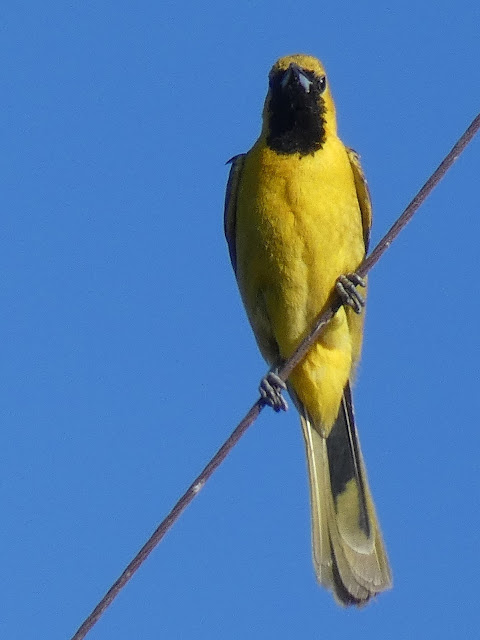 But I'm pretty sure the birds will be back. Hooded Orioles are not common in our region, but this is the third year that I've seen the species, all within a few hundred yards of the palm trees on the bluff. Somehow they find this particular spot after a journey of a few thousand miles. I guess when you have a home, you never forget where it is. 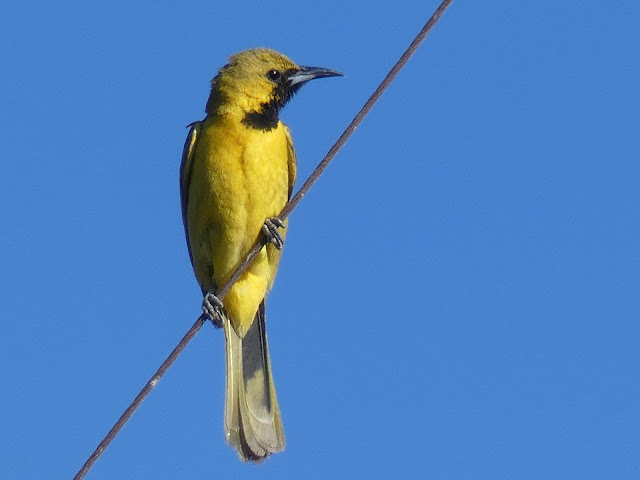 I'll miss their bright colors when they leave!
Posted by Garry Hayes at 9:20 PM No comments: