Catching Up With Our California Endemic: The Yellow-billed Magpie 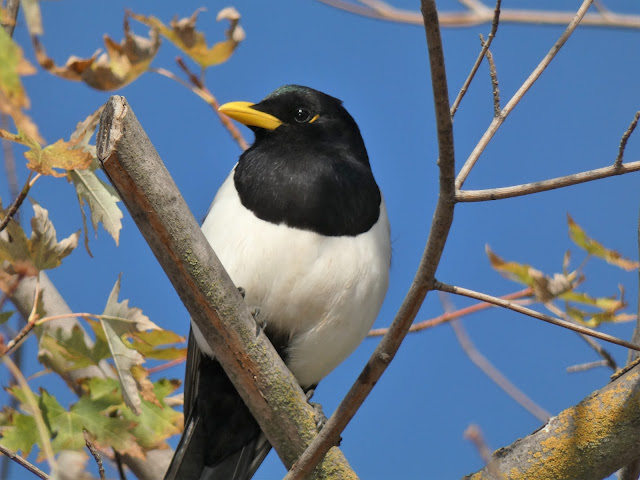 I see them pretty much every day, so it's easy sometimes to forget that this is an exceedingly rare bird. There are less than 200,000 of them in the world, which is not all that many for a species that is faced with habitat loss, and an exotic disease. The Yellow-billed Magpie (Pica nuttalli) is also one of California's few endemic bird species.

If you are a non-Californian, you might look at this species and think it is just a magpie (the Black-billed Magpie), but it is a distinct species, and the ranges of the birds rarely overlap. The Sierra Nevada is the barrier that has provided the isolation allowing the species to diverge. 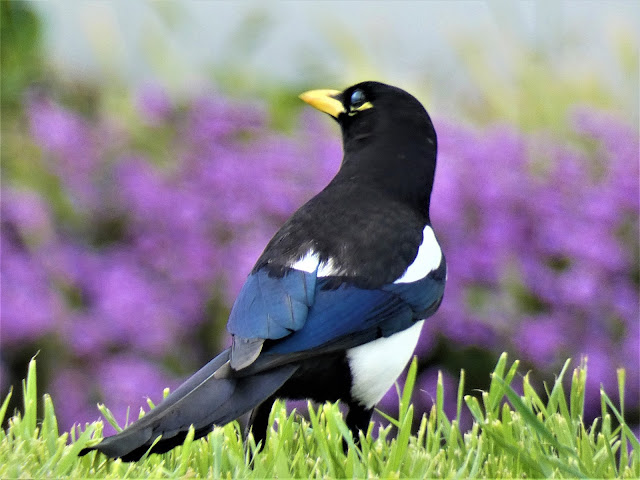 I live and work in prime magpie habitat. They range over the Coast Ranges and Central Valley of California, living off of bugs, grains, and pretty much any kind of food they can find. They are gregarious, often flying about in flocks, and engaging in boisterous arguments. A day at work would be lonely without their calls going on in the background. 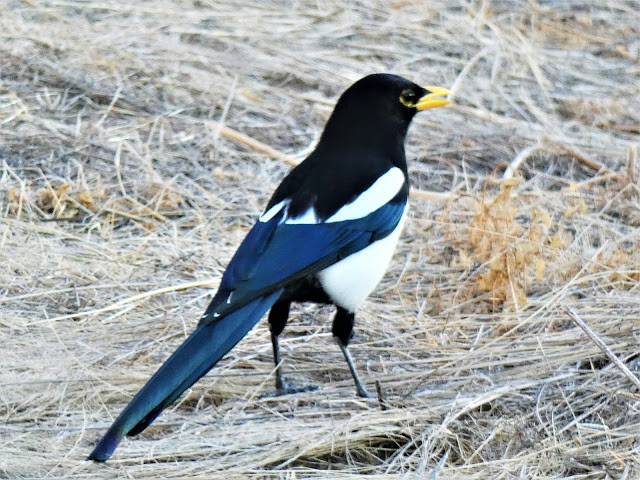 The arrival of the West Nile Virus was nearly their undoing in the early 2000s. They were particularly susceptible to the viral infection because of their gregarious nature, and more than half of them were lost. The few birds with natural resistance have survived and have allowed the population to slowly rise again. 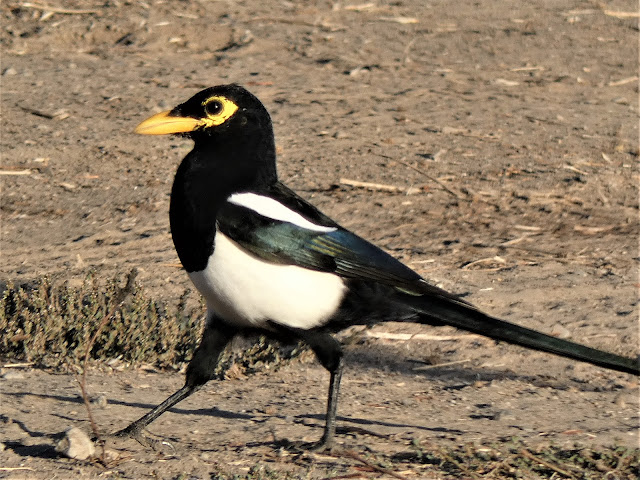 These pictures are some I've collected this year from the MJC West Campus and the along the Tuolumne Parkway Trail where I most often see the birds. I'm glad they survived their version of the bubonic plague. The state would be a less interesting place without them. 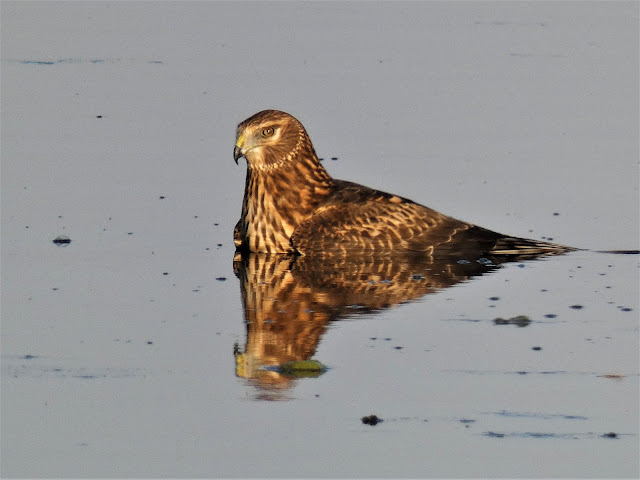 The Northern Harrier (Circus hudsonius) is quite a challenge to photograph. They search for prey in marshes and wetlands by flying low over the vegetation listening for small mammals or birds. Their hearing is enhanced by their owl-like faces that direct sound to their ears. The problem is that they only seem to stop when they are pouncing on something down in the brush. We don't get many chances to see them up close. That's what made today so fun. Today the Harrier came to us. 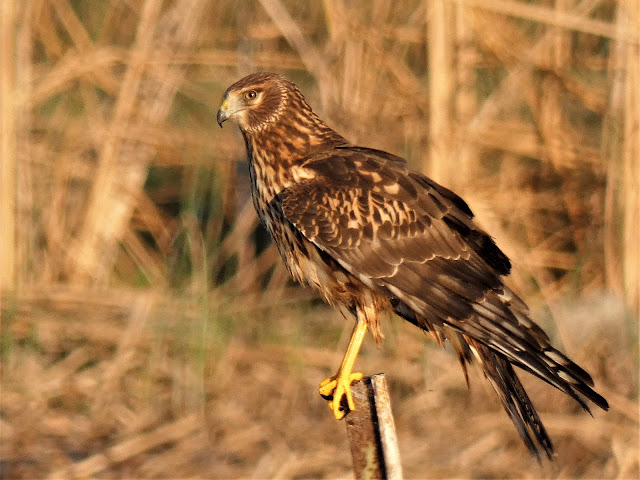 We were following the auto-tour at the Merced National Wildlife Refuge when we noticed a bird in the water that was most un-ducklike. It was a half submerged Harrier! I've never seen one in the water like that before, but a little research revealed that they sometimes subdue their prey by drowning them. I don't know if that was what was happening, but it was a thrill to have it so close by (only 30-40 yards away). Then it surprised us even more by taking off and landing on a post even closer to the road. It pretty much didn't care that three cars were parked only a few yards away. 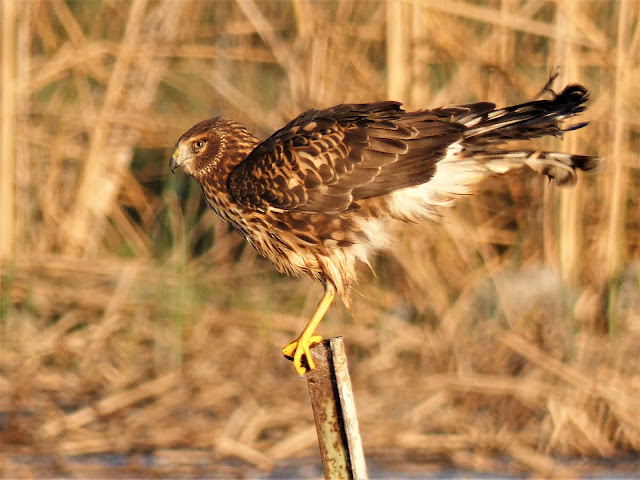 I never saw it carrying anything, but after a few moments it flew into some rushes and appeared to be eating something.

It's the closest I've ever been to one of these beautiful birds.
Posted by Garry Hayes at 1:08 AM 1 comment:

Burrowing Owl on the Prairie! 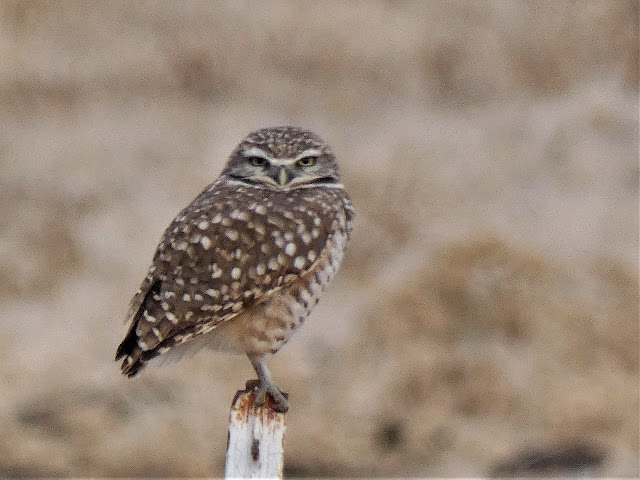 We been really hunting for owls on our last few trips. We haven't seen many this year, and had become curious if there are actually fewer of them around. I've been watching our "owl trees" at the Merced and San Luis National Wildlife Refuges without success, and last spring we searched our known owl nests and didn't see much there either. I've had a few fleeting views of Barn Owls while driving home in the darkness, but of course photography was out of the question. I've heard a few Great Horned Owls at night. But our favorite, the Burrowing Owl (Athene cunicularia) remained elusive. About four days ago we had a quick glance of one on Willms Road in the late twilight, but it wasn't until tonight that I got a good look at one.

I was taking a roundabout route to the CSU Stanislaus campus in the late afternoon and decided to check the north shore of Turlock Reservoir, a spot where I've seen Burrowing Owls before. Out of sheer habit I check a particular barbwire fence along Lake Road where I had seen one a year ago, and much to my surprise, there it was, perched in almost the same exact spot. I guess we recognized each other because it didn't up and fly away when I pointed the camera.

It's nice to see them out and about. 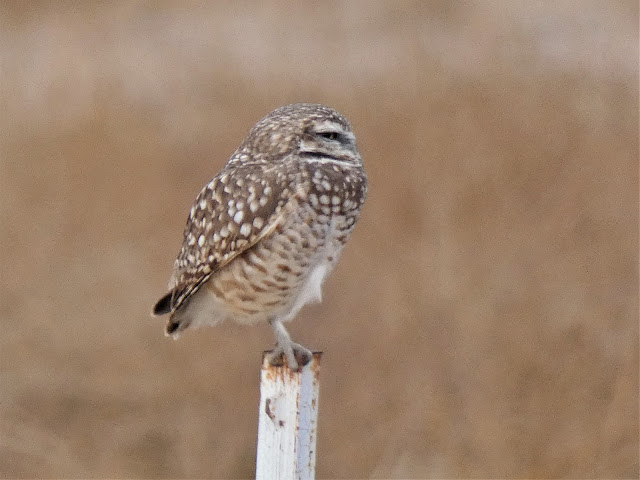 Posted by Garry Hayes at 7:02 PM No comments:

European Starling Murmuration at the West Campus of MJC 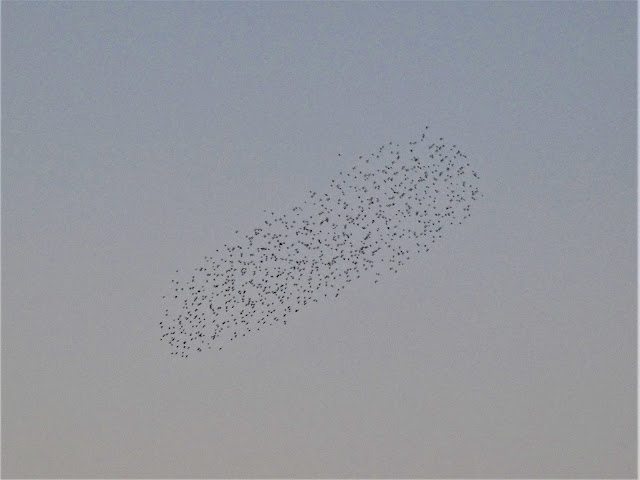 Sometimes the unexpected happens. I was a little frustrated with daylight savings cutting into my evening walking time between classes, but I went walking anyway and was treated to a fascinating sight: a Starling murmuration. Several thousand birds were doing an acrobatic flyover near the Briggsmore Ave/Highway 99 overpass, and it was hypnotizing (which was probably the intended effect, but in regards to predators wanting to pick off an isolated bird). Despite the very poor light conditions, I was able to get two minutes of video (below). 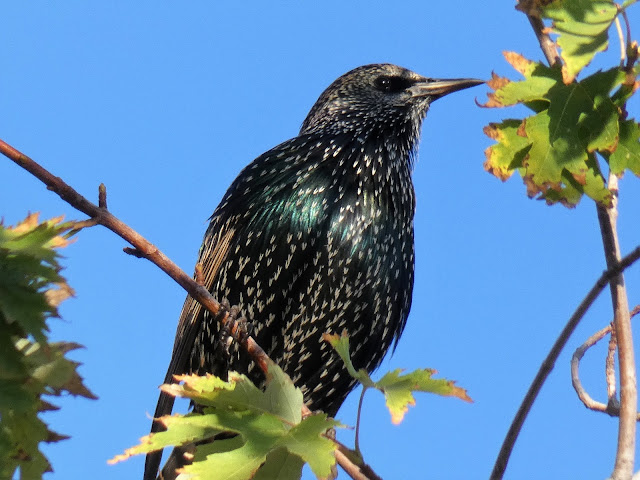 It's amazing how the birds can fly in such coordination, creating strange patterns in the sky, looking almost like a single organism. At times I imagined single cells separating and coming together again, and a bird tornado. Studies suggest the birds maintain their coordination by concentrating on the activity of the nearest seven birds around them.

European Starlings are an anathema to many birders and ecologists. They are native to Europe (hence the name), but a few were introduced to Central Park in New York City more than a century ago as an effort to establish all the birds mentioned in the works of Shakespeare. The idea went awry and the birds spread across the continent by the tens of millions. They are often the most numerous birds I record on my birding explorations, and they have displaced native species in many habitats. All bad, but forgotten in a moment of pure natural art.

Posted by Garry Hayes at 6:08 PM No comments:

A Hard Bird to Catch: Ruby-crowned Kinglet on the Tuolumne River 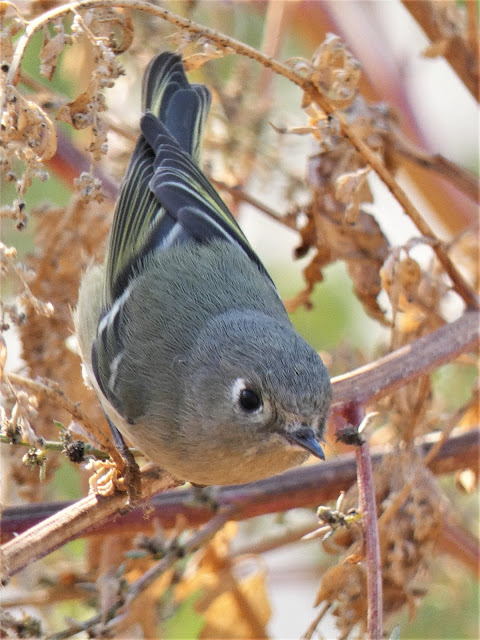 I look back on my half-dozen posts showing the Ruby-crowned Kinglet (Regulus calendula), and in practically all of them I complain about the difficulty of capturing their picture because the birds don't hold still very often. They don't stop moving. That was true today as well. I've been seeing the kinglets for a week or so during my walks on the Tuolumne River, but I have had little luck capturing any pictures.

I was a bit luckier today, getting two usable shots out of twenty attempts. I'm guessing this is a female because it doesn't seem to have the "ruby" crown, although the crown can be hard to see in the males as well except maybe in breeding season. The birds aren't around here in summer...they head north or up into the Sierra Nevada for breeding. Their return is one of many harbingers of the coming winter. 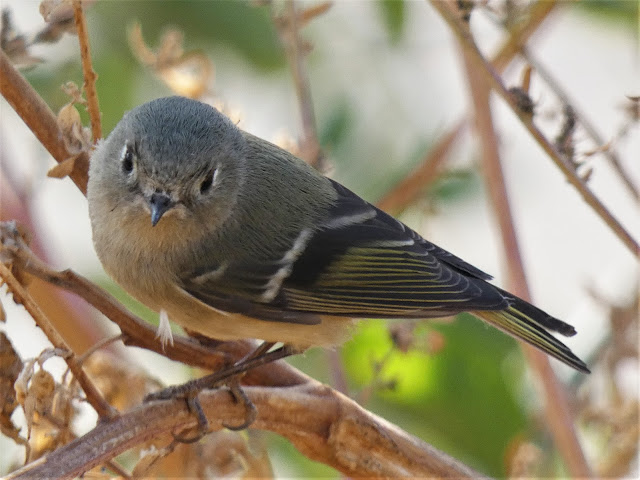 Just because I posted these pictures today, I'll probably see a male with a ruby crown tomorrow, but in the meantime, here is one of the best shots I ever got of the crown, taken in February of 2018. 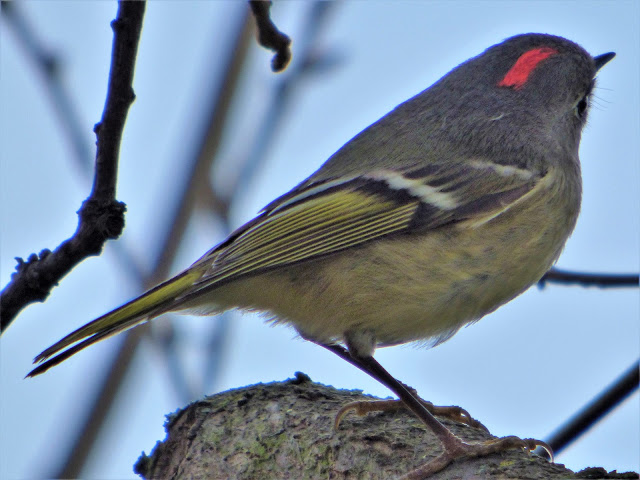 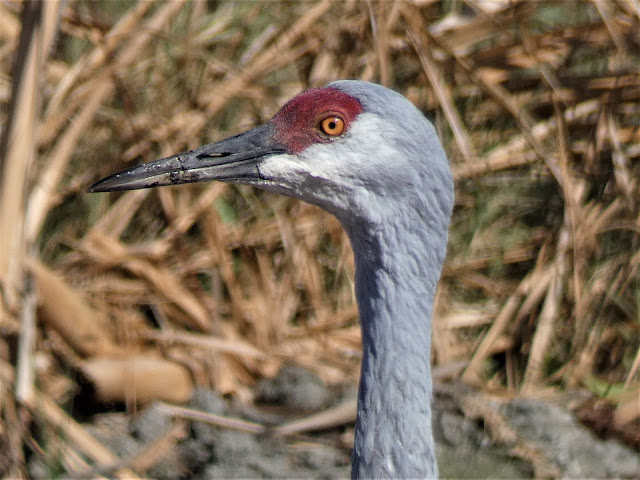 I discovered a leucistic Black Phoebe at the Merced National Wildlife Refuge last week, and that distracted me for awhile from the actual reason we had gone down there. We were actually wanting to check in and see which winter migrants had arrived. The most dramatic of the Arctic species arriving in the last month are the Sandhill Cranes (Grus canadensis), and they were at the refuge by the thousands. 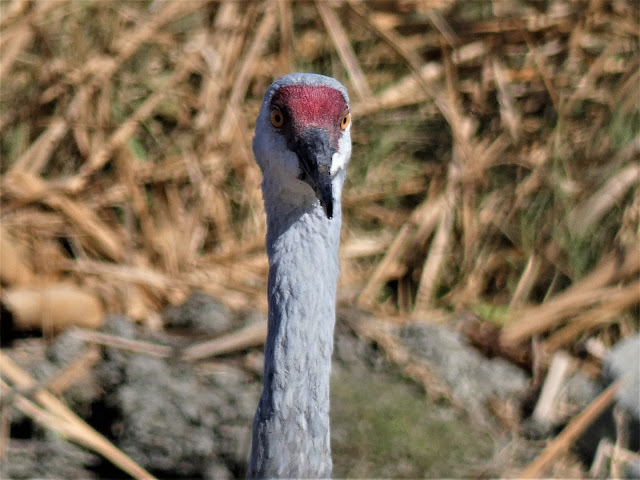 I posted a few pictures two weeks ago after our first visit, but some of the birds were closer to the road this time, so I got some nice closeups. These birds have a lot of personality at times. 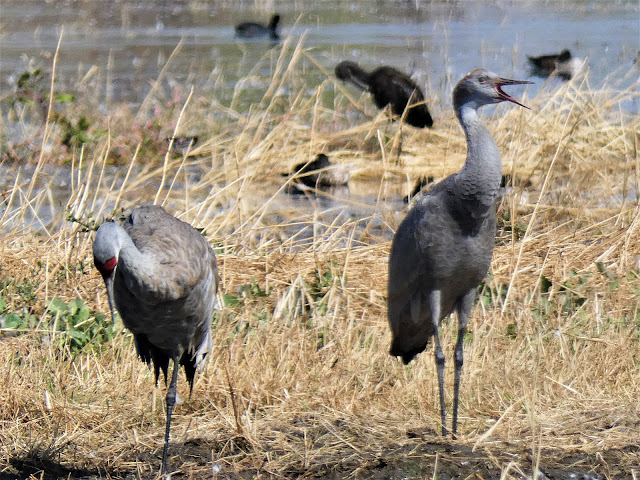 I think they have a rudimentary understanding of yoga exercises if the picture below is any guide. 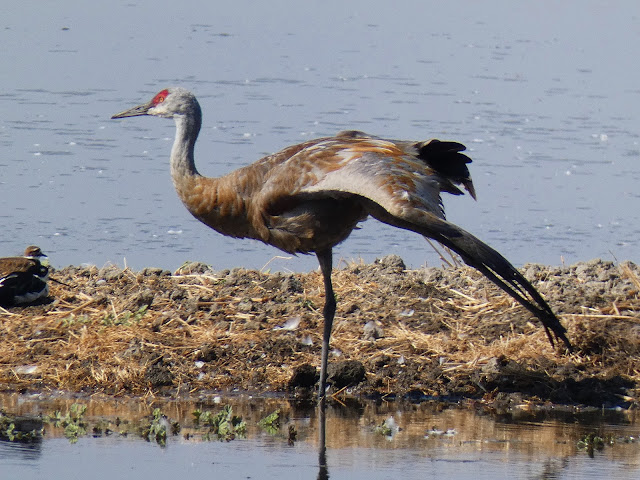 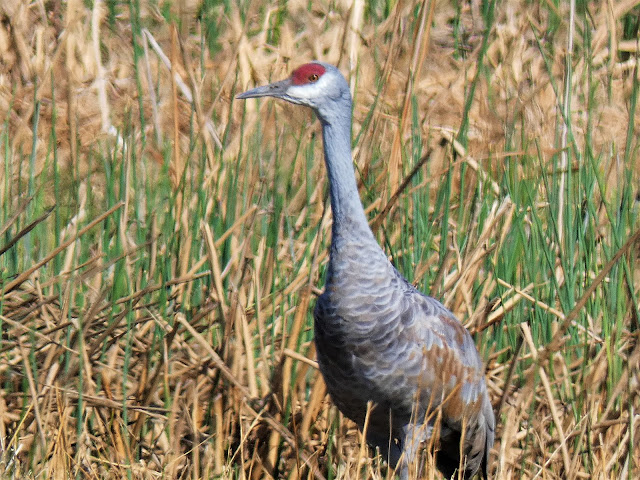 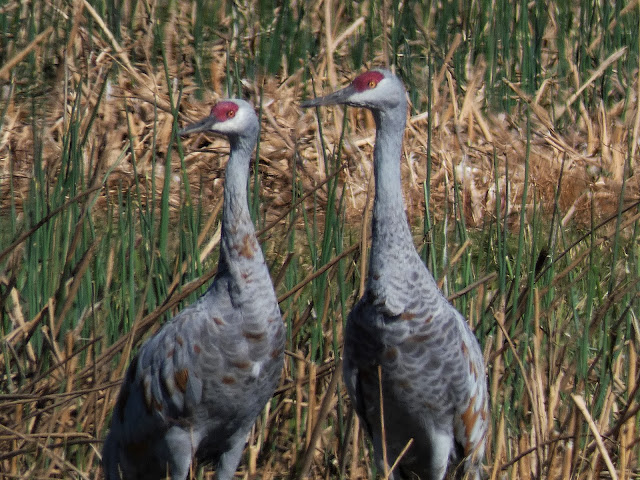 I mentioned in the last post how much I love the "purring" of their call. At one of our stops, a few walked nearby vocalizing, so I caught some video of the moment. Enjoy!

Posted by Garry Hayes at 7:46 PM No comments: