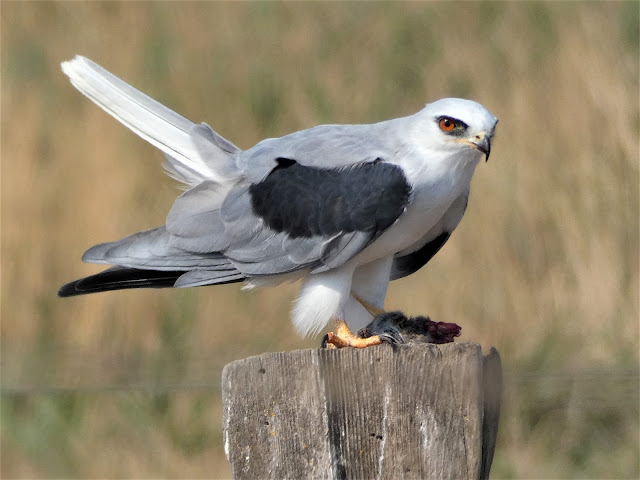 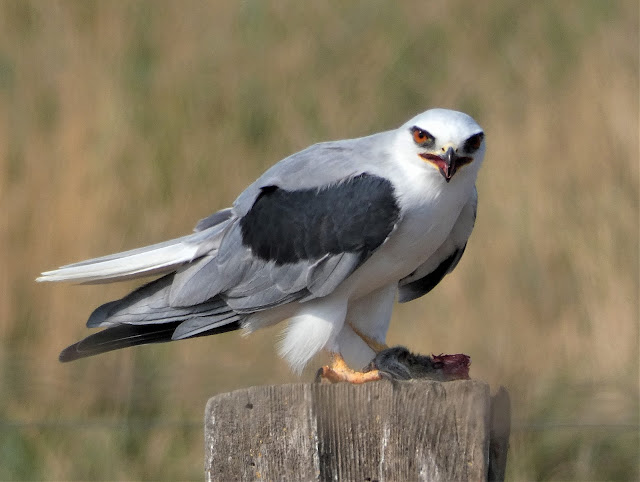 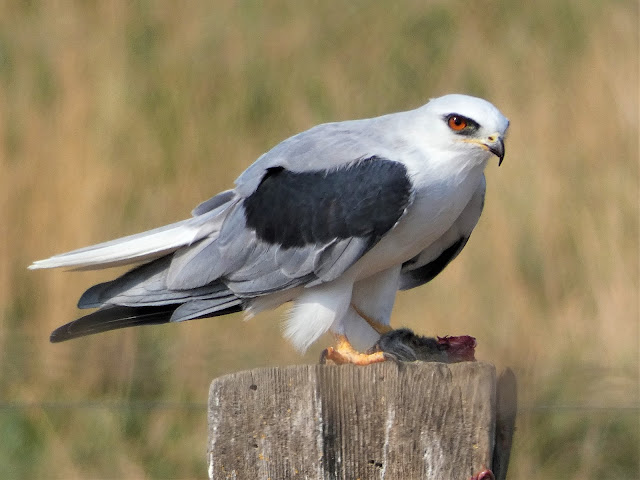 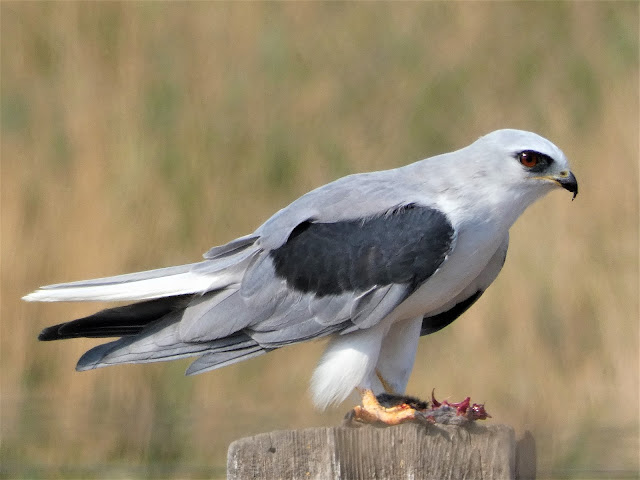 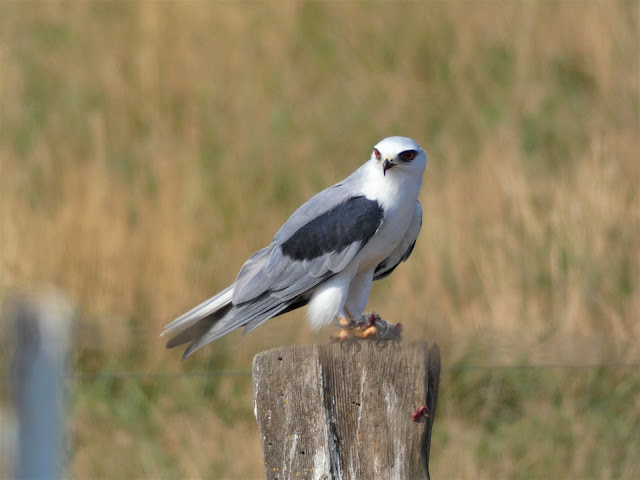 A Real Gem on the Tuolumne River: A Lazuli Bunting 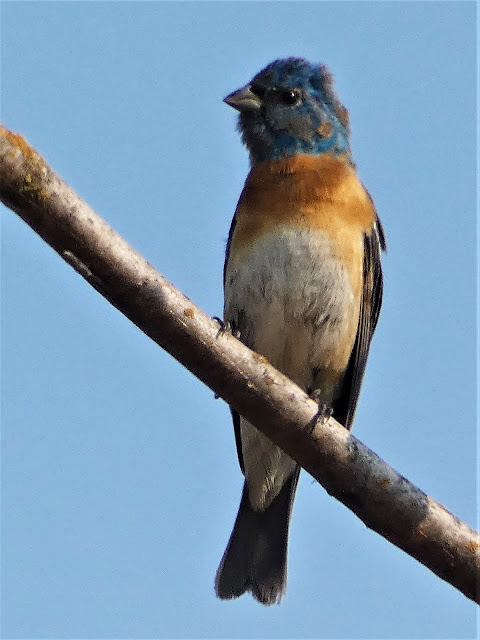 There's a semi-precious gemstone called lapis lazuli. It's actually a metamorphic rock containing a variety of minerals, but the intense blue is caused by a mineral called lazurite. It's often speckled with small grains of gold-colored pyrite. The gem has been mined for thousands of years, especially in Afghanistan, Russia, and Chile. I got to collect some once in one of the very few spots in California where it can sometimes be found. The intense blue of the mineral has led to its use as a pigment in oil paints in Medieval times (the color ultramarine), and is especially associated with the Virgin Mary. 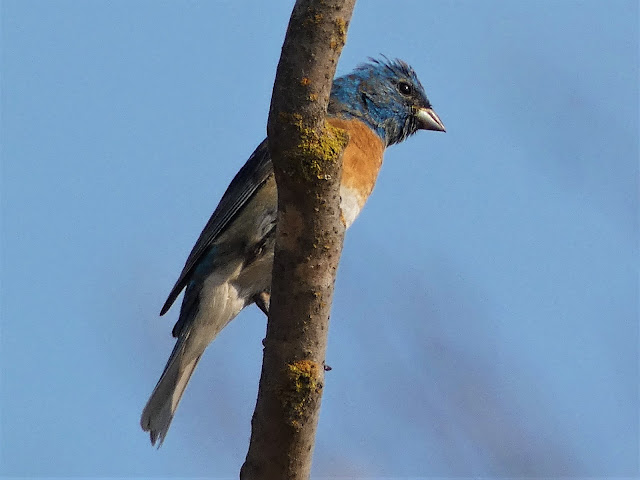 I love the color blue, and I am lucky to have a number of bright blue birds that are common locally, including the Tree Swallow, California Scrub Jay and the Western Bluebird. But there are some blue birds that are exceedingly rare, at least in my experience, including the Blue Grosbeak and the subject of today's post, the Lazuli Bunting (Passerina amoena). They're real gems. If I am lucky, I'll spy them two or three times in a year. It's even rarer to get a half-decent picture. 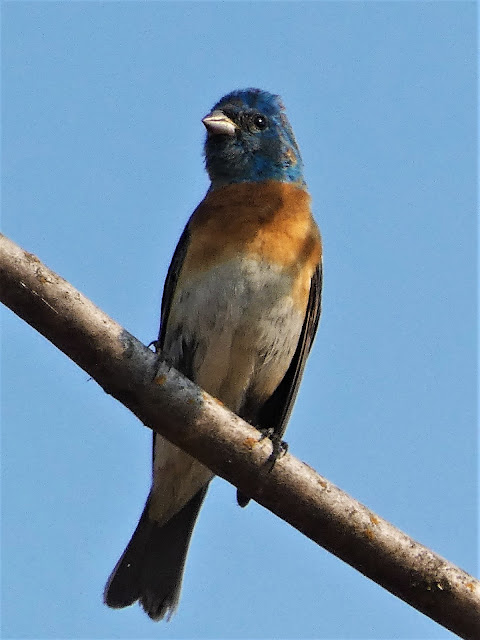 I saw the first Lazuli Bunting of the year a few weeks ago after a good friend insisted she was hearing one near the trailhead for the Tuolumne River Parkway Trail where I walk nearly every day. Her observation was spot on as I got a brief look at a male. But the pictures were very grainy. Today though, I was walking along the river trail when I spotted a small bird in the distance. I thought it was another sparrow, but it was perched vertically which raised my suspicion that it wasn't a 'normal' bird. I got the binoculars out and saw the chestnut color on the breast, but I still couldn't see it clearly. I carefully drew near and the intense blue color became apparent. The bird was nice enough to hang out long enough to get some of the best pictures I've ever captured. 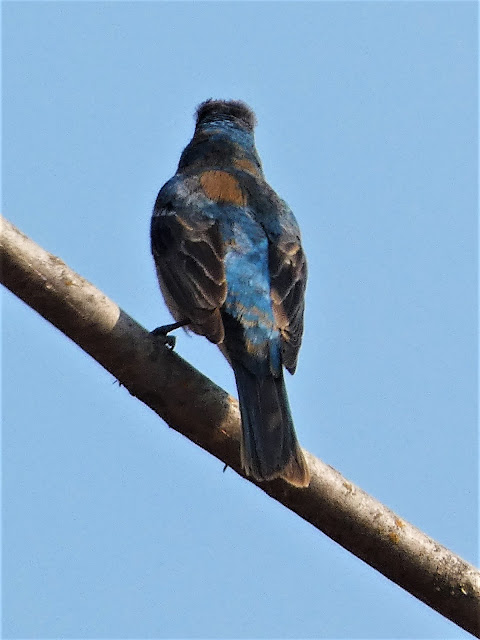 The Lazuli Buntings are summertime migrants in our region, and indeed across much of the western states and southernmost Canada. Come winter they'll be in Mexico. Although their Latin name means "beautiful sparrow", they are more closely related to the Cardinals and Grosbeaks. 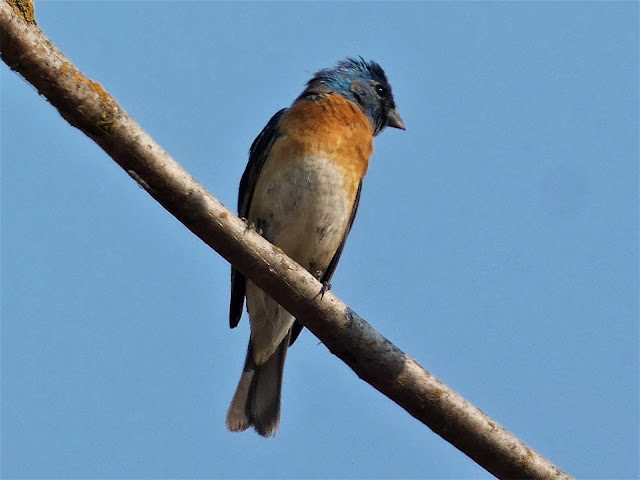