American Kestrel and California Scrub Jay on the Tuolumne River 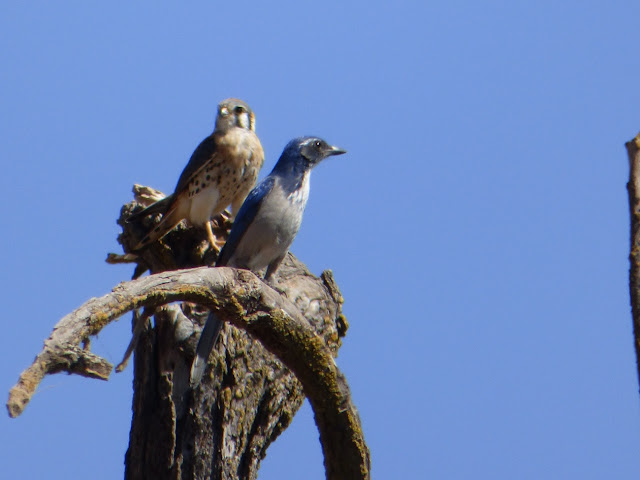 Lots of travels lately, so I haven't had many chances to explore the river in my own backyard, much less post pictures of birds in general. But this morning I got the chance and almost immediately noticed an American Kestrel (Falco sparverius) in the top of one of the dead oak trees. That wasn't unusual, but it was being mobbed a bit by two or three California Scrub Jays (Aphelocoma californica). I don't know what they were arguing about, but they all flew away when I walked under the tree.

You haven't heard of a California Scrub Jay before? That might be because it has only been a species for less than a year. Those in charge of such things decided in 2016 that two races or subspecies of the Western Scrub Jay were actually distinct species. The California Scrub Jay ranges across the coastal mountains of Baja, California, Oregon and Washington, while the Woodhouse's Scrub Jay ranges across the interior states of Nevada, Utah, Colorado, Arizona, and New Mexico. The California Jays have a slightly hooked beak that allows for attacking acorns while the Woodhouse's beak is straighter, allowing them to dig out pine nuts from cones.
Posted by Garry Hayes at 4:48 PM No comments: 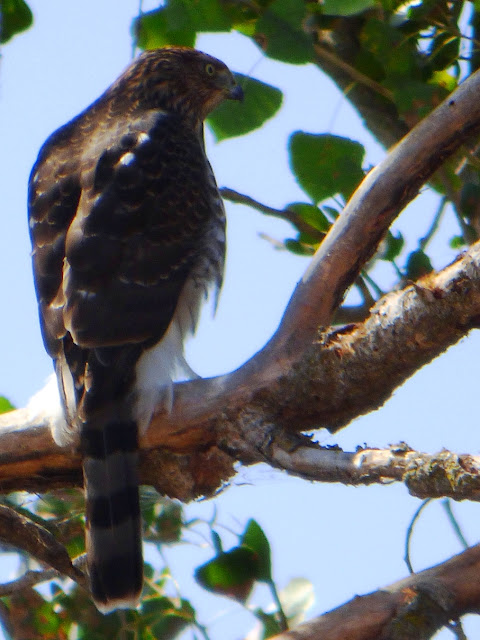 I got back out on the Tuolumne River Parkway Trail this morning. There weren't many birds out, or otters for that matter, but I stopped a moment in a big clump of Elderberry bushes. I've probably found seven or eight species of birds feeding on the berries, but there didn't seem to be any birds today. I backed out and was startled by an unexpectedly large bird bursting out of the far end. I saw the barred tail and knew it wasn't a Red-tailed Hawk. It was also too small for that.

It landed in the big cottonwood downstream and I got a couple of shots. Cooper's and Sharp-shinned Hawks can be very similar in appearance, especially the juveniles. My best conjecture is that it was a Sharp-shinned Hawk because the end of the tail is straight instead of curved. I'm always open to correction, however. It's the first one I've seen on the Tuolumne River Parkway Trail (I saw one a year ago on the San Joaquin River).

Mountain Quail at Columns of the Giants 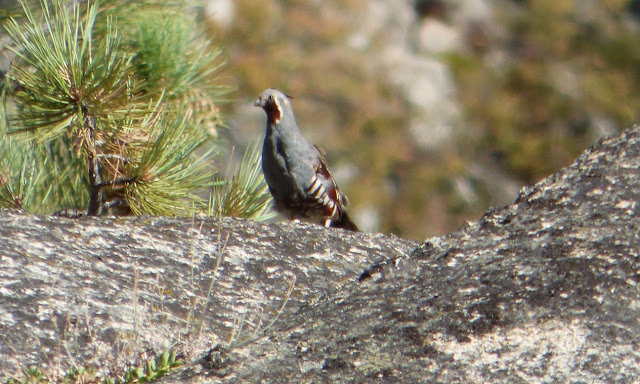 We took a short trip up the Stanislaus River this afternoon, taking a short hike to the Columns of the Giants. The columns are volcanic in nature, similar to Devil's Postpile, or the Giant's Causeway in Ireland. Along the way, we spotted a new bird (to me). It was fairly large, moving through the underbrush. I thought immediately of California Quail, but I thought maybe we were a bit high for them (a check of the e-bird map confirmed this). 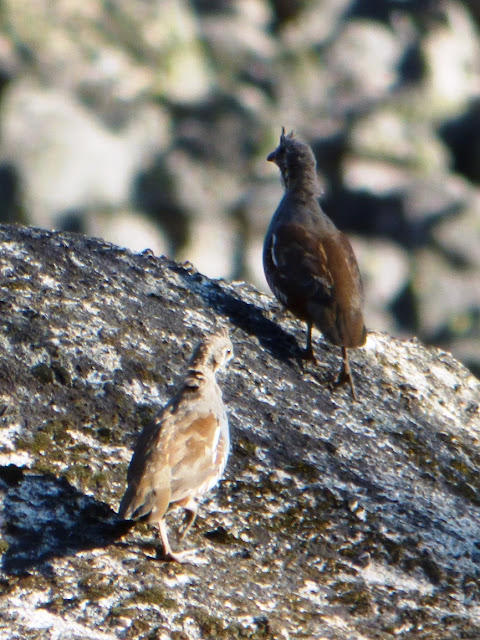 It was only a moment before I realized that I had encountered a covey of at least a dozen of them. Later, I was able to identify them as Mountain Quail (Oreortyx pictus). Like the California Quail, it is a bird of the far western United States, with a range from northern Baja to the Canadian border and only barely extending into Idaho. Their habitat includes shrubby vegetation in mountainous areas. It has not been reported in my home area in the Great Valley. 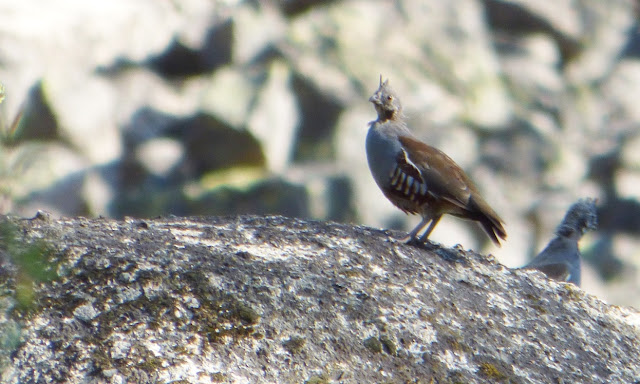 They crept slowly up the granite boulders above the trail, and several kept an eye on us from the top of the small ridge. Then they disappeared into the trees, but called out for a while longer. We moved on up the trail. 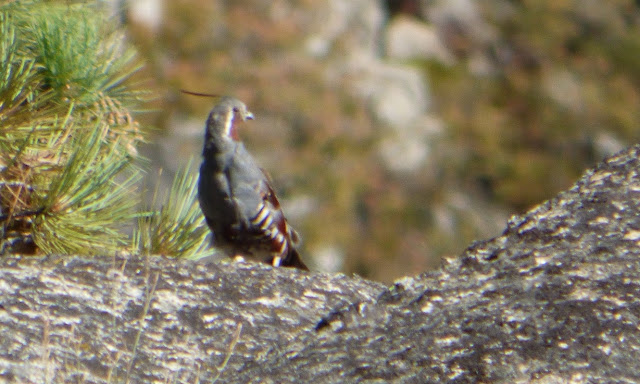 A Look at California Condors on International Vulture Awareness Day

It always sneaks up to me, but today is International Vulture Awareness Day. We do need to appreciate the scavengers and cleaners of our world, but my appreciation goes a little deeper, more like admiration. My favorite member of the vulture family is a real survivor, despite our worst abuses, and great changes in their world: the California Condor (Gymnogyps californianus).

California Condors are one of the few direct links we have to a world that disappeared 11,000 years ago. At that time, California and the American West played host to a diverse and fascinating megafauna that included mammoths, mastodons, giant ground sloths, giant elk, bison, horses, and camels, , and a frightening array of predators, including dire wolves, American lions, short-faced bears (bigger than grizzlies), and saber-tooth cats. All gone now, lost to an extinction event that is still not understood: it could have been predation by humans, climate change, even an unfortunately-aimed asteroid impact. The condor, one of the largest of birds, was the clean-up crew when the giant predators of the giant grazers were done eating. When the megafauna disappeared, the condors went into a decline, and the largest species of condors went extinct. Their near-extinction was not necessarily the fault of humans; there may have been only 300 or so when the Spaniards first explored California. Still, we in the modern era didn't help matters. We shot them, or poisoned them with lead buckshot to the point that there were only about two dozen left in the 1980's.

Wildlife biologists stepped in at that point, capturing the last remaining wild birds in 1987, and beginning a program of captive breeding. It has been a reasonable success, with 435 birds alive today. 268 of them have been released into the wild, with populations in Grand Canyon (top picture), the Zion Park region, the Coast Ranges of California (second photo), and part of northern Mexico.

Take a moment to thank the scavengers of our world!

(Note: this is an edited/updated version of one of my earliest posts at Geotripper)
Posted by Garry Hayes at 11:33 AM No comments: 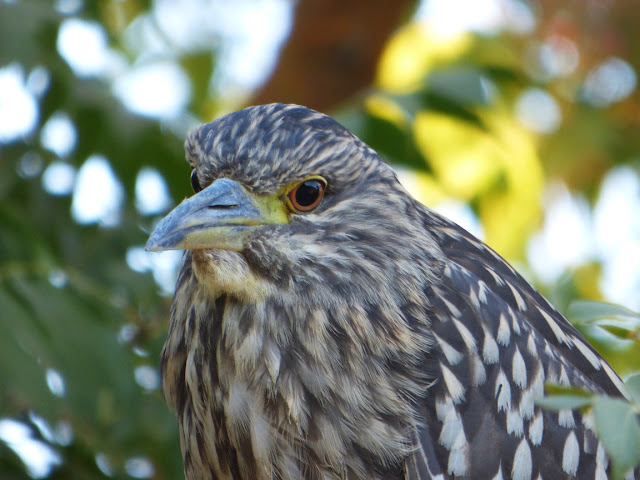 In yesterday's post, I mentioned how I had the privilege of seeing three species of water birds in close proximity on the campus where I teach Earth Science, CSU Stanislaus. They were a Black-crowned Night Heron, a Great Egret, and a Snowy Egret. Tonight's shot is that of the Black-crowned Night Heron (Nycticorax nycticorax). It was a juvenile, as shown by the white spotting on the wing coverts (the adults have solid blue). 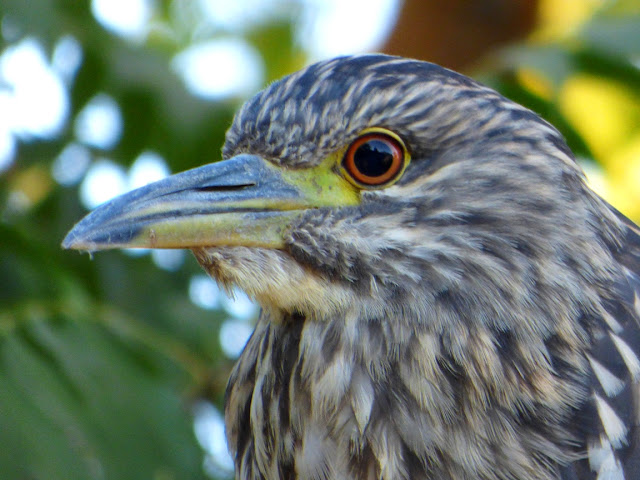 The pond that these birds inhabit is ringed by concrete pathways, so the birds, though wild, are somewhat acclimated to the presence of humans. I didn't go off the path to get the pictures, and they never flew away as I walked up. The zoom lens on the camera helped too. 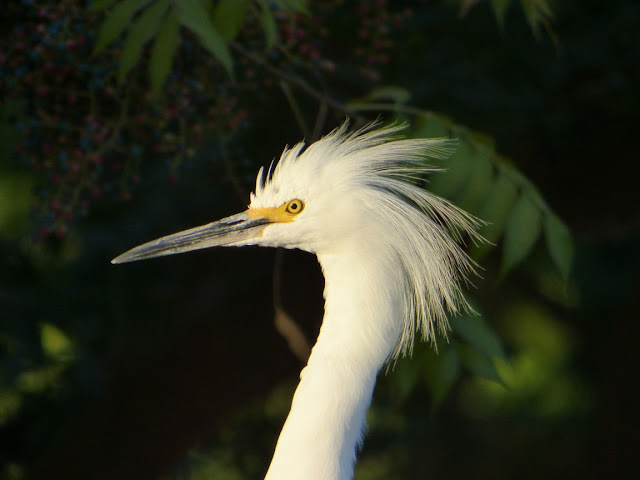 What a treat last night! I'm back to work teaching classes, including an evening course at CSU Stanislaus. There's a large pond behind my office that has offered shelter to a surprising number of species, and some of them are acclimated enough to humans that they allow themselves to be photographed in relatively close quarters. I took these shots from a well-trafficked sidewalk along the pond edge. I had three uniquely beautiful birds in one spot, a Great Egret, a Snowy Egret, and a Black-crowned Night Heron (below).

The picture above may well be the Snowy Egret (Egretta thula) that has appeared previously on this blog, but I've never caught this pose with the head feathers on alert. It's one of my favorite pics in recent months. 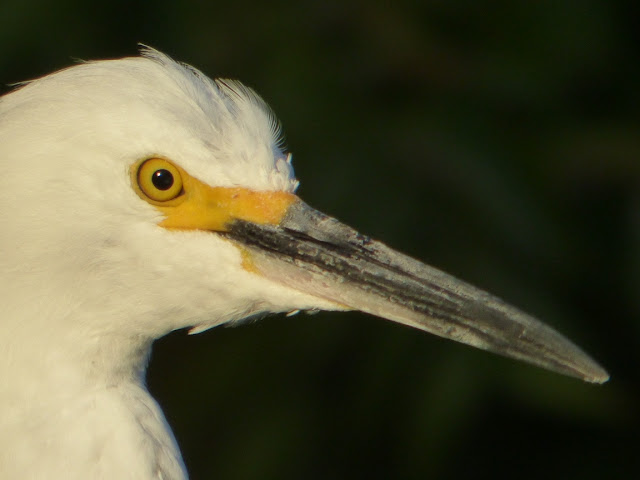 Snowy Egrets are smaller than the Great Egrets, as can be seen below. The Green Heron is on the fence. It will probably be featured in the next post. 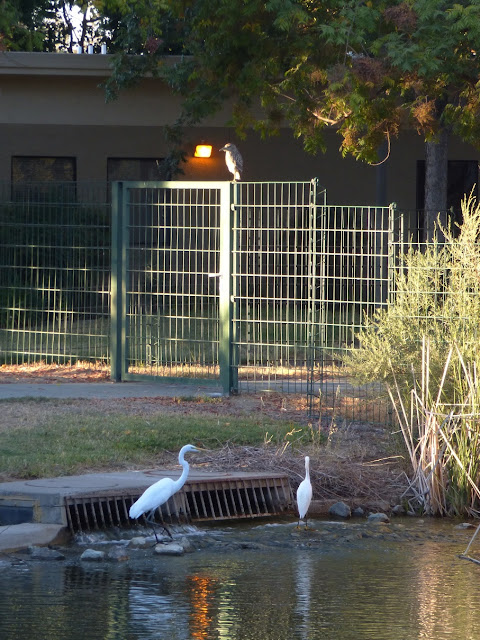