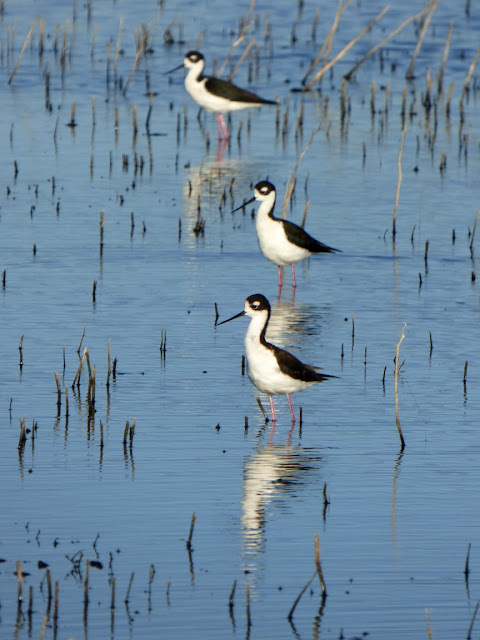 During our visit to the San Luis National Wildlife Refuge, we saw several new birds, but there were some familiar ones as well. One of them was the Black-necked Stilt (Himantopus mexicanus). The birds are primarily a tropical species. They migrate north in the summer, mainly in the western states. The Great Valley represents just about the northern margin of their year-round habitation.

I was thrilled to see three of them all lined up in a row, posing for me, so I snapped the picture above. But as usual, Mrs. Geotripper saw a symmetry that I didn't notice, a 90 degree angle made by my Stilts, and a group of Long-billed Dowitchers. She got the nice shot below. 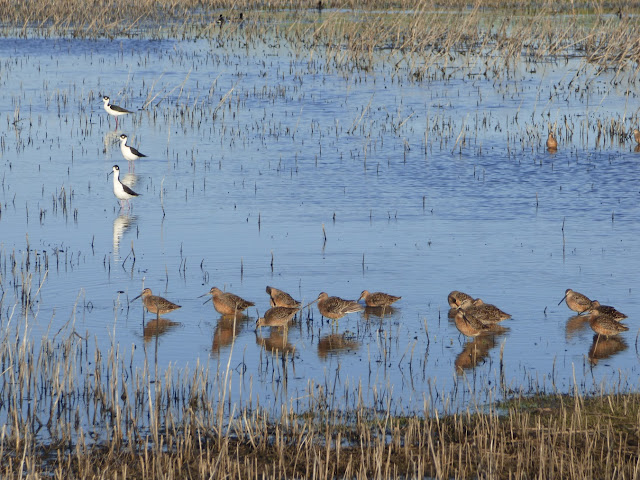 I enjoy watching the stilts more than most birds. Their ungainly appearance belies a graceful gait and hunting dance. Only one bird, the Flamingo, has longer legs in proportion to their bodies. With their long beaks and legs, they are clearly birds of shallow waters, where they search the mud for invertebrates, and sometimes small fish. 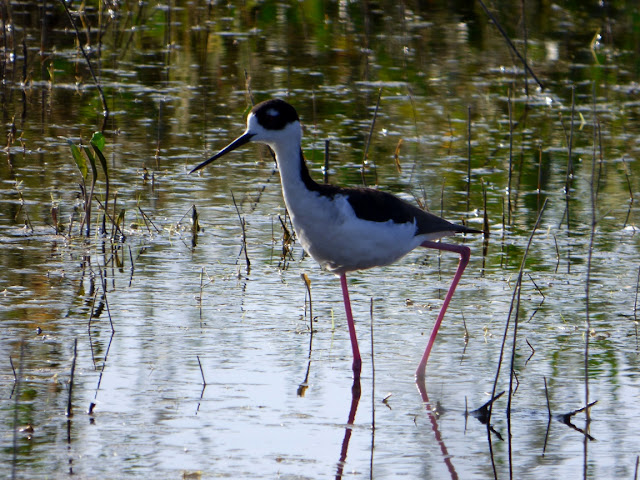 The stilts form colonies when they nest, and they can be quite aggressive towards predators, surrounding them flapping wings and mobbing them. According the Cornell site, their populations have been holding steady, which is pretty good since most birds these days are declining. 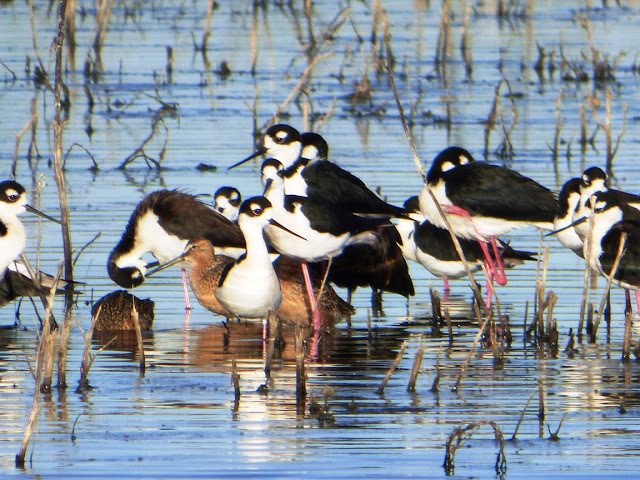 The San Luis National Wildlife Refuge protects 42 square miles of floodplains, wetlands, swamps and grasslands along the San Joaquin River in the Great Valley. There are a number of auto tours and hiking routes available, and we've seen interesting birds in every season of the year.
Posted by Garry Hayes at 11:09 PM No comments: 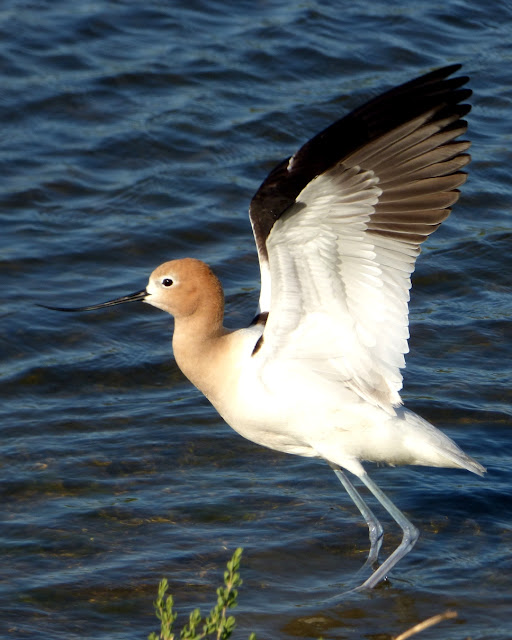 Mrs. Geotripper got the prize shot the other day of the American Avocet (Recurvirostra americana) that we saw at the San Luis National Wildlife Refuge. I was on the wrong side of the car when the Avocet decided to walk out of the water and display her wings. The Avocets migrate trough our area on their way north for breeding and there was still plenty of water at the Bear Creek Unit. . 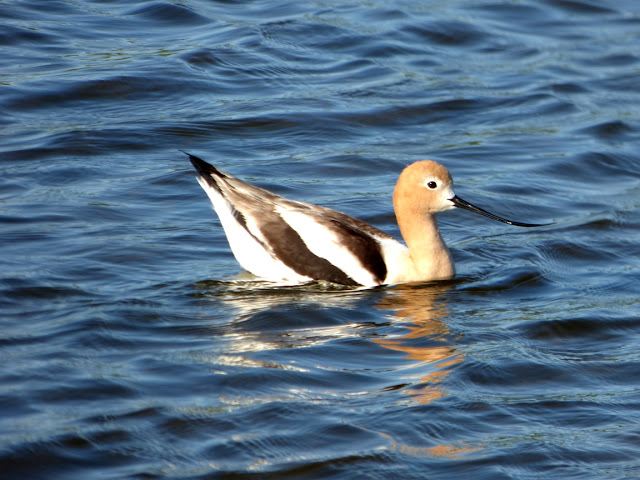 The long curved beak is obviously evolved to sweep through mud and silt, allowing the bird to capture small invertebrates. The bright colors are related to breeding. In the off-season the birds are a bit plainer in appearance (see this post from last year). 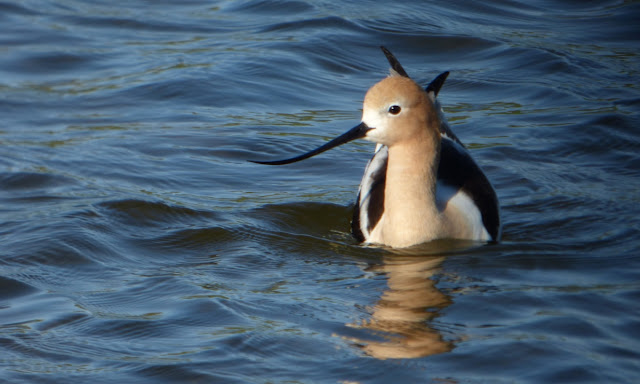 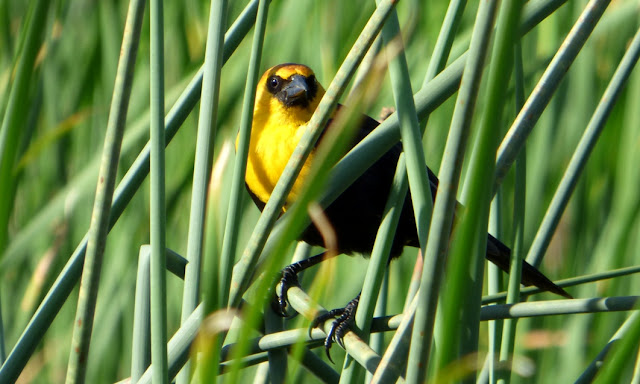 This was an absolute first for me. We've been going to the San Luis National Wildlife Refuge multiple times over the last two years or so, and not once have we seen a Yellow-headed Blackbird (Xanthocephalus xanthocephalus) along the way. Yesterday we saw perhaps a dozen of them. I'm pretty sure they weren't there on our previous visits, because they are really hard to miss, even from a distance.

It appears that these birds aren't seen all that often around here, as they are usually migrating through the area on their way to breeding grounds farther to the north in Nevada as far as southern Canada. They winter in Mexico, New Mexico, and Texas. There are a handful of breeding colonies in our Great Valley, although they were once more plentiful before 90% of the valley wetlands were plowed over. 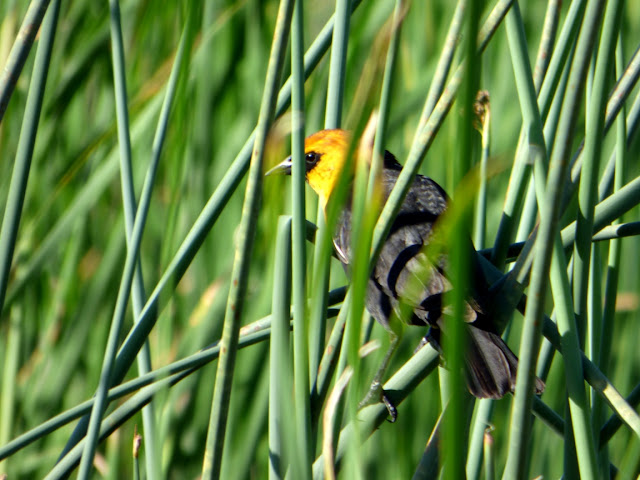 I hope I'll have another chance to catch these beautiful birds a little more in the open. They were doing a good job of staying just behind the reeds, so that every picture had one piece or another of the bird missing. If they weren't hiding, they were flying overhead. I saw four at once on two different occasions in addition to the perching individuals, so we saw as many as a dozen of them in total. 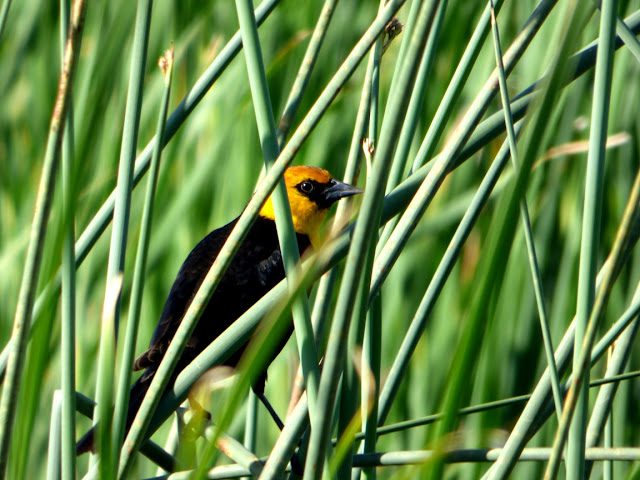 It would be interesting if they were breeding right there at San Luis. 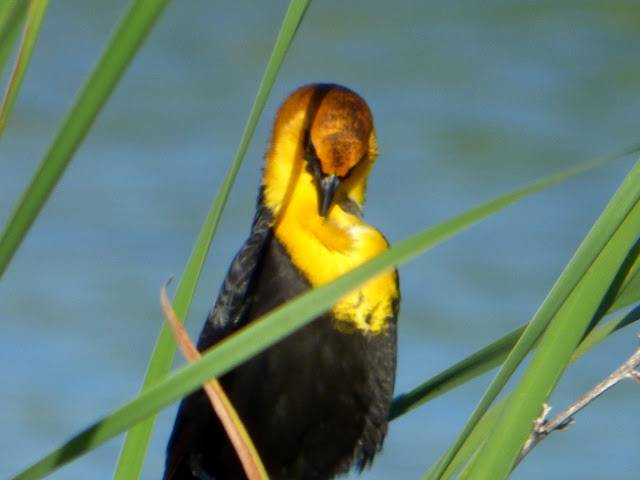 Posted by Garry Hayes at 9:52 PM No comments: 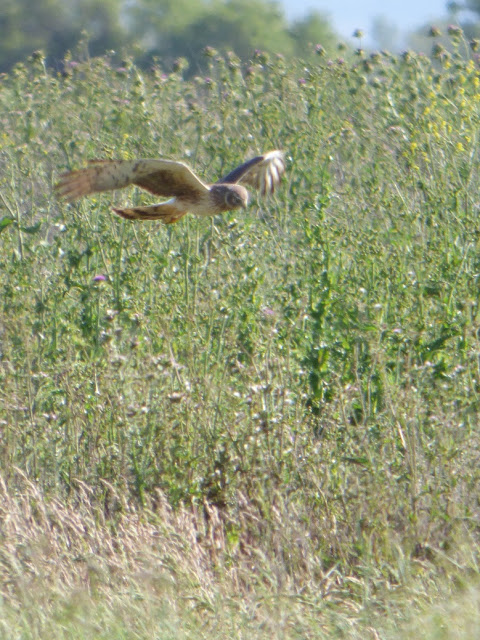 It's been a long drought of birding trips. It's the very end of the semester when things are the most hectic, so things like exercise and meditative breaks at bird refuges have become rare. I got most of my grading for the weekend done, so as an afternoon reward, we headed down to the San Luis National Wildlife Refuge (Bear Creek Unit) to see what's going on now that the arctic birds have headed north. We spent several relaxed hours on the auto tours, and much to my delight, we got pictures of three new bird species to debut here on the blog. The first pictures are the least artistic, but they're the first I've taken of the Northern Harrier (Circus cyaneus) that are at all identifiable. The birds (there were several of them) were flying low and slow over the grasslands. 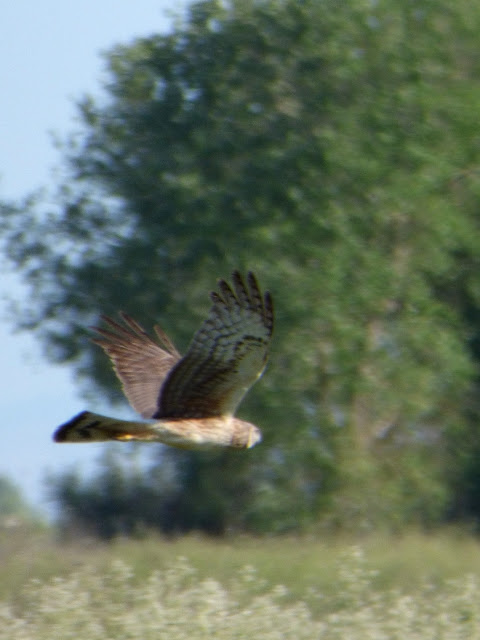 The Harriers are a little bit strange for a hawk, having a foreshortened owl-like face that allows them to hear their prey better in vegetation. They also have a distinctive white band on their backside that is a distinctive mark in identifying them at a distance, which is good because that is just about the only place I see them: at a distance. 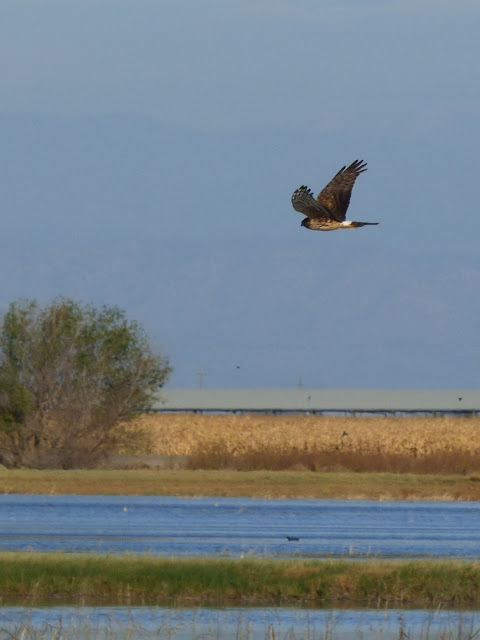 I did a bit of searching, and it turns out that I did catch a few photos of a Harrier last fall at the Merced Unit of the San Luis National Wildlife Refuge. A little closer each time...maybe a nice sharp picture next time around.

POSTSCRIPT (7/6/17): The scientific name of the Northern Harrier has been changed to Circus hudsonius.
Posted by Garry Hayes at 12:54 AM No comments: So here's a familiar bird. It's so familiar and widespread around these parts that I hadn't thought to post pictures of it on this blog yet. It's a Canada Goose (Branta canadensis). I thought of it today because I was meditating and considering deep philosophical issues (ahem, daydreaming) in my office when I noticed a large bird on top of the adjacent building, sitting where a hawk might normally perch. 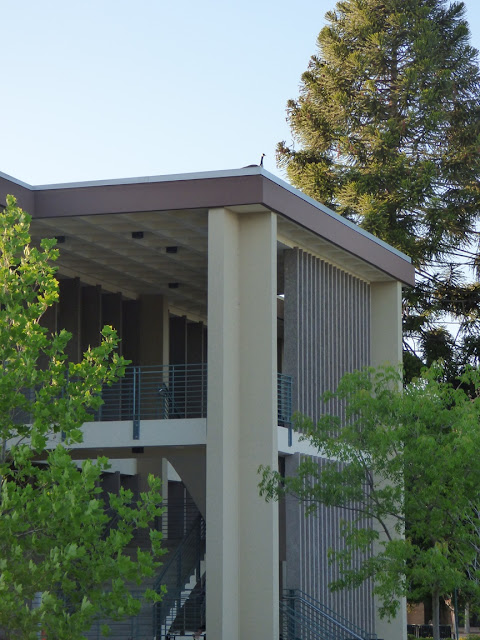 I tend to think of these birds as denizens of lawns and ponds, not majestic perches above the landscape. Then again, Canada Geese are more likely than others to think outside the box. They used to pretty much exclusively migrate north for the summer (and many still do), but some find urban areas much to their liking, due to a year-round supply of food and water. Their populations have grown to the extent that in many locales they are considered pests, both because of fouling the grass with their droppings, but also because they can be aggressive and pack a mean bite. 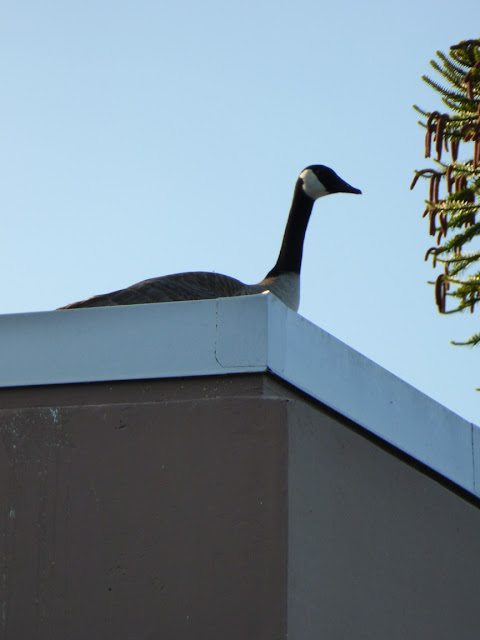 On the CSU campus where I teach a part-time course they caused enough of a problem that the management has brought in specially trained dogs to harass and haze the birds so they'll go elsewhere. I suppose it is working to some extent because I don't generally see more than half a dozen at a time. But it's interesting how they've learned to perch on their "cliffs" beyond the reach of any dogs... 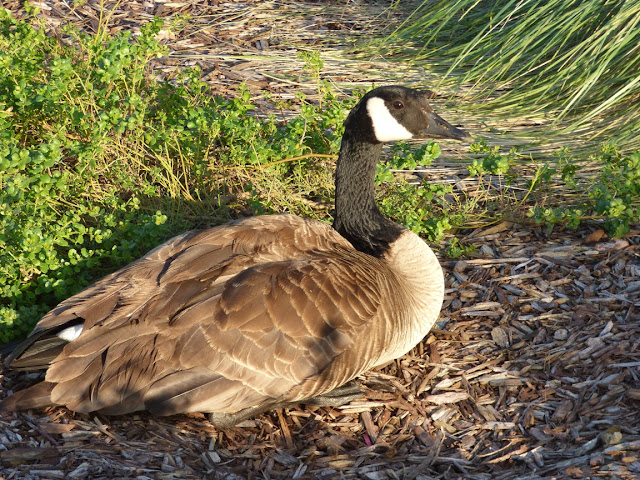 Posted by Garry Hayes at 7:10 PM No comments:

Field of Dreams: Killdeer in the future Outdoor Education Laboratory 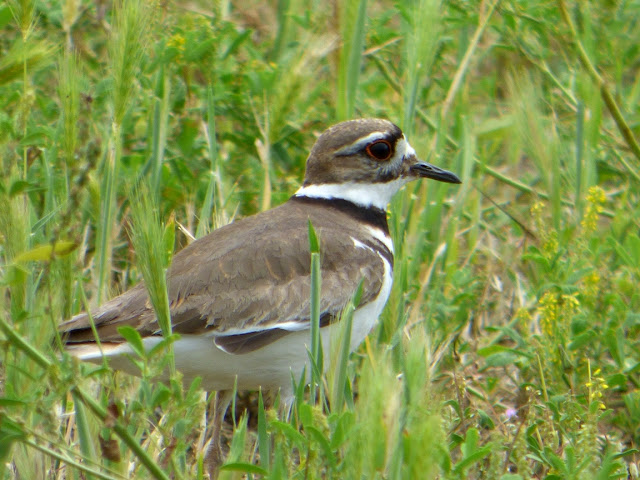 I've not posted for several weeks. It's the last few weeks of the semester and things are hectic, leaving little time for explorations and walks. I noticed something today from my third floor laboratory. There has been a lot of construction going on across the campus, mostly involving the design and alignment of a road around the north end of campus. A worker was putting up some markers along the north edge of our future Outdoor Education Laboratory, which is intended to be a small natural habitat on campus that will replicate some of the natural ecosystems of the Great Valley.  The work was causing a commotion, as a number of Killdeer (Charadrius vociferus) were voicing their objections to his presence. 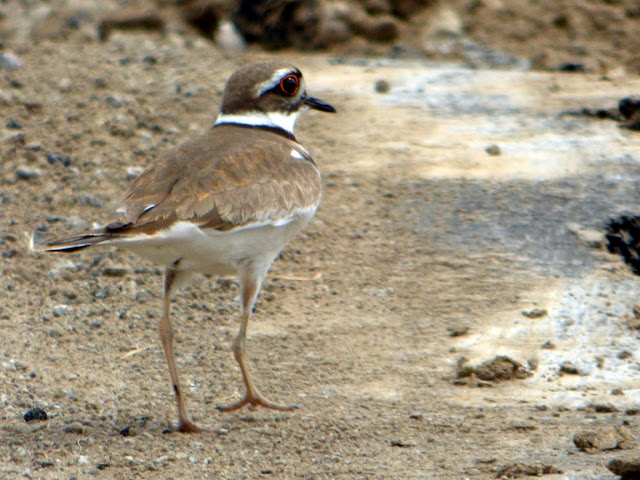 I'm curious to know if our Outdoor Education is already in operation. I didn't see the Killdeer doing their iconic "broken wing" distraction, but I'm wondering if they maybe have a nest out in the weeds somewhere in the midst of the future habitat. Nature may be claiming its spot.

We've been fighting for an outdoor education facility on this campus for more than thirty years, and it is our understanding that it is finally going to happen. We haven't been kept in the loop on the planning, so I hope it doesn't get screwed up. There is a lot of potential value in having something more than displays in a museum. Displays are important, but imagine the thrill of learning something inside the museum, and then stepping outdoors and witnessing the phenomena in real life. It's priceless..

One of the Prettiest of Songs: A Western Meadowlark on Willms Road


Meadowlarks have one of the prettiest bird songs around. I grew up hearing them on my Grandparent's ranch when I was a child, so whenever I hear them these days, I briefly turn eight years old again, when an acre was a trackless wilderness in which all manner of adventures could be had. 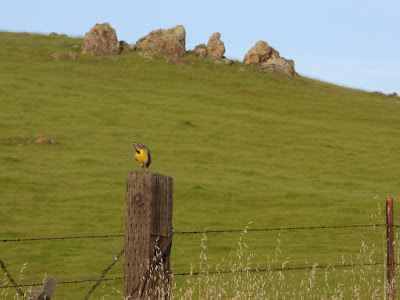 We were on Willms Road, which travels south from Knights Ferry on the Stanislaus River in the foothills of the Sierra Nevada. Being spring, the Western Meadowlarks (Sturnella neglecta) are singing their hearts out, and one stayed on the fencepost long enough to be videoed, but my photos came out a bit fuzzy, so enjoy the two shots below from an earlier trip in the southern Mother Lode. 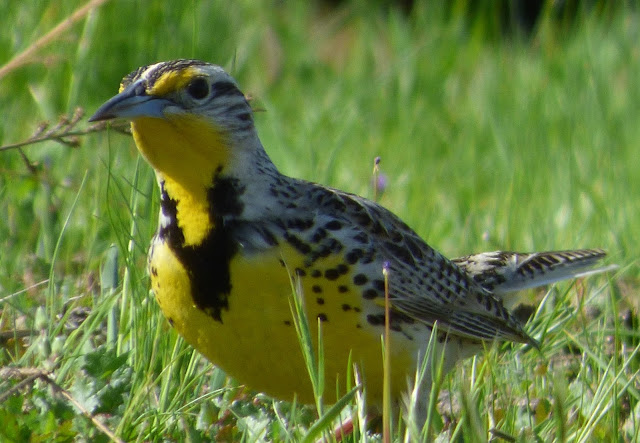 Besides their beautiful songs, the Meadowlarks are quite striking in their plumage as well. 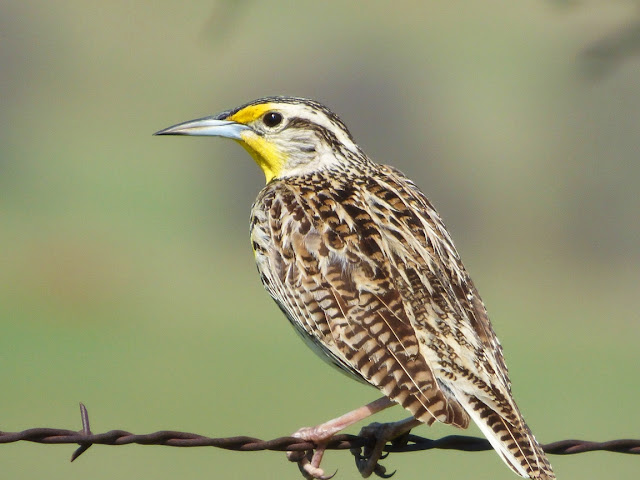 Another Sign of Spring! Hooded Oriole at Fox Grove 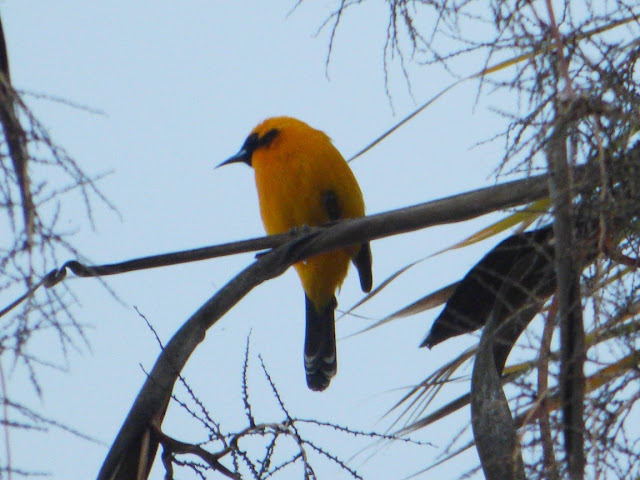 The Hooded Orioles (Icterus cucullatus) are back. The birds spend the winter in southern Mexico and migrate north to breed. They prefer palms for nesting, so they tend to go no farther north than the Central Valley in California and the southern tier states of the Four Corners along with Texas.

The local birders report that some palm trees along the Tuolumne River at Fox Grove east of Modesto is a reliable nesting area, so I searched there last year and got two fuzzy pictures. I check out the grove again today, and saw lots of Starlings and doves in the palms. As I was about to leave, I saw one more dark silhouette that I thought was one more Starling, but it was moving a bit differently than the others. I zoomed in, and it was a Hooded Oriole! 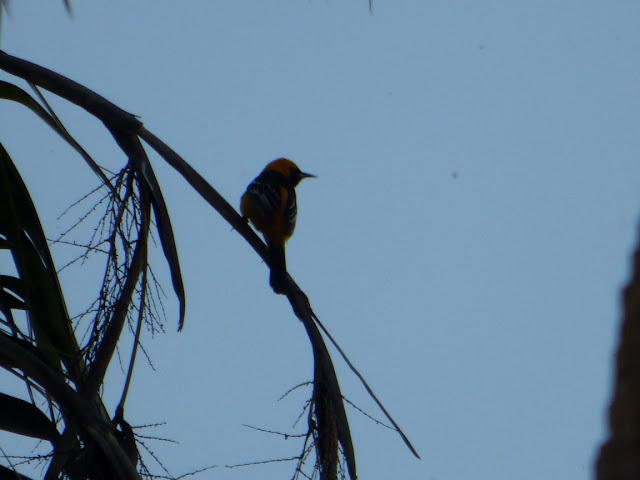 Of course, the pictures are slightly fuzzy again, but that just means I'm going to work a bit harder to get good pictures next time... 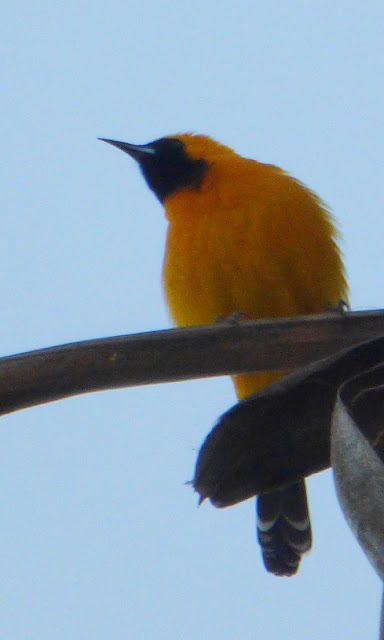 Posted by Garry Hayes at 9:38 PM No comments: