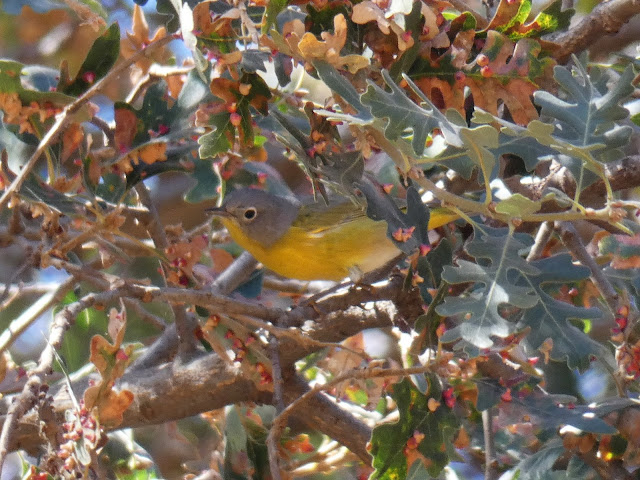 I've been keeping an eye out for warblers of late. It's nearly fall, and the migrants have been making their way south through the Great Valley. I need a lot of practice in their identification, because at least 16 species have been reported in our county, and some of them can be hard to tell apart. I'm hoping that's not the case here: the white eye-ring, the olive-gray head, and the bright yellow breast and neck are distinctive characters of the Nashville Warbler (Oreothlypis ruficapilla). I saw one this morning for the first time while hiking on the Tuolumne River Parkway Trail. 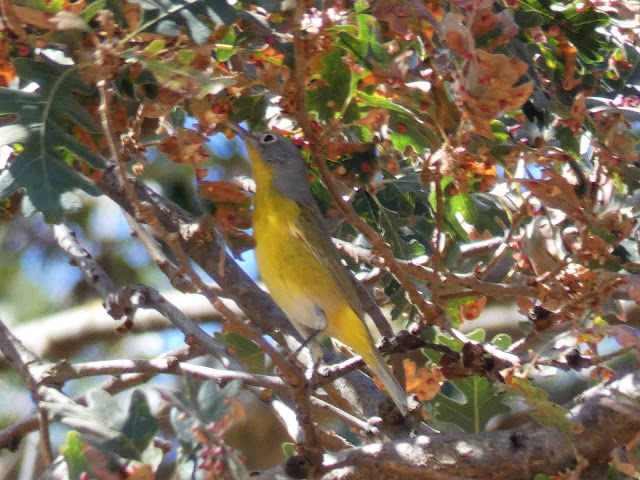 The warbler clan shows the effect of isolation on the evolution of these birds. The western population of the Nashville Warbler is a brighter yellow than those found in the eastern United States, and it was once considered a separate species called the Calaveras Warbler, a name I find much more interesting. We can still call it by that name, since it is officially a subspecies called Oreothlypis ruficapilla ridgwayi.

Oh, and by the way, the bird has little to do with Nashville. It breeds in Canada and the Pacific Northwest and migrates in winter to the tropics. The ones seen in Nashville that gave the species its name were simply migrants passing through.
Posted by Garry Hayes at 11:51 PM