Orange-crowned Warbler on the Tuolumne River 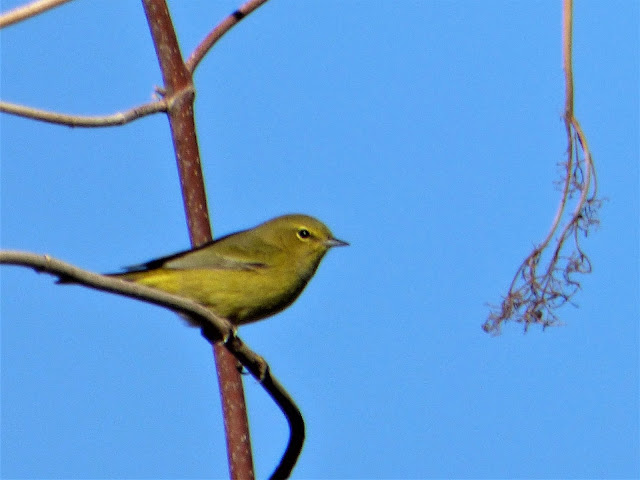 Sometimes you only get a single chance. I saw what I think was an Orange-crowned Warbler in a wild Elderberry bush on my walk today along the Tuolumne River. I managed a single shot before it vacated the premises, and though I walked past the thicket three more times, I didn't see it again. I don't know my warblers well, but I'm assuming it is an Oreothlypis celata because of the broken eye-ring and overall olive-yellow color. As always, I welcome gentle correction.

The Orange-crowned Warblers are found across North America, migrating from Mexico and the southeastern United States to Canada and Alaska for breeding. There are orange feathers on the head, but they aren't seen very often.

The Elderberry bush where I saw the bird is kind of a unique spot. It's huge, with a trail of use running through the middle, like a bower. I can stand inside and it works like a bird blind. It's a favorite feeding spot in the fall, and I've seen Vireos, Phainopeplas, Scrub Jays, and all manner of Finches and Sparrows. The Elderberry is also habitat for one of our endangered species, the Valley Elderberry Longhorn Beetle (Desmocerus californicus dimorphus). I have yet to see one, but part of the program to protect them requires the preservation of native Elderberry plants. Since the shrubs make good environments for numerous birds, it's a win-win situation.
https://www.fws.gov/sacramento/es_species/Accounts/Invertebrates/es_valley_elderberry_longhorn_beetle.htm
Posted by Garry Hayes at 9:09 PM