Just a Bit of Searching and There They Are...'Apanane at Hawaii Volcanoes National Park Redux 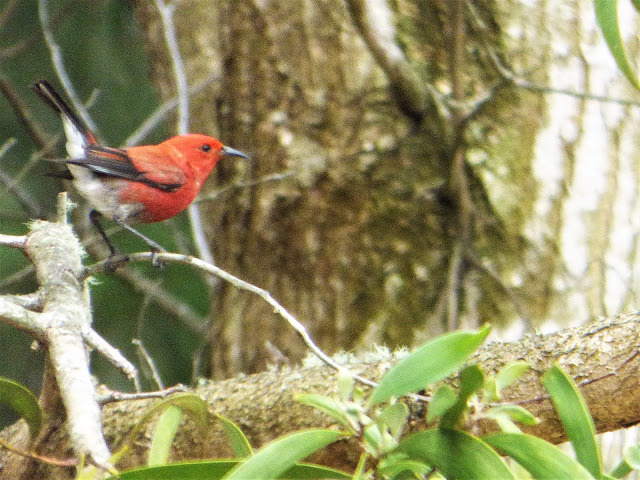 So...the other day I was all excited about FINALLY seeing and catching pictures of an 'Apanane (Himatione sanguinea) at Hawai'i Volcanoes National Park. The thing is, I wasn't birding at the time. I was participating in a geology field studies trip, and any birds I saw off in the distance were icing on the cake. I didn't have the time to watch quietly and carefully, nor was I in the best place to see them. But the other day was different. We headed up to Hawai'i Volcanoes National Park for the expressed purpose of checking out some of the best birding spots in the park, particularly the Moana Loa Road and the Kipuka Puaulu, the "bird kipuka". And the 'Apanane were quite evident! I probably saw a hundred or more, and some were close enough to capture some images.
To the extent that most people are not birders, and that the native birds of Hawai'i mostly live above 4,000 feet because of avian malaria spread by mosquitoes at lower elevations, and that only a small part of the human population of the islands live at that elevation, I suspect that even most Hawaiians don't get many chances to see these colorful birds. But in the right circumstances they are fairly common. Kipuka Puaulu is an ideal choice, as it is an isolated island of mature rainforest surrounded by young lava flows (that is the basic definition of a kipuka, an area missed by lava flows). The isolation helps to keep out the mongooses and feral cats who have destroyed many a bird population. Fencing has also kept out cattle and goats that would destroy the underbrush that supplies food and shelter to the birds. 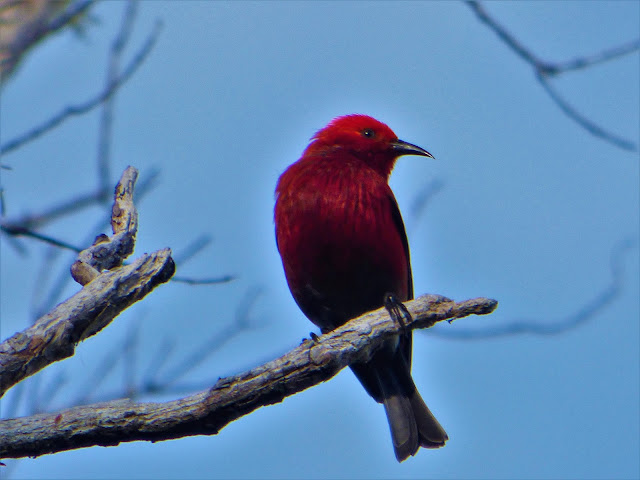 I walked to the upper end of the loop where some ancient "grandfather" Ohia trees had died but left tall snags and I realized that dozens and dozens of birds were flitting around. I finally got some of the close-up shots I had been hoping for, and more. There was another bird I got a couple of pictures of, but I was totally unsure of what species I was seeing. I downloaded the images and went to work with my bird guide, and came up empty. There was nothing that looked like the bird in the picture below. After I while I looked at the beak again and realized it was the same curving beak as the 'Apanane. This was a juvenile! They don't look very much like their parents... 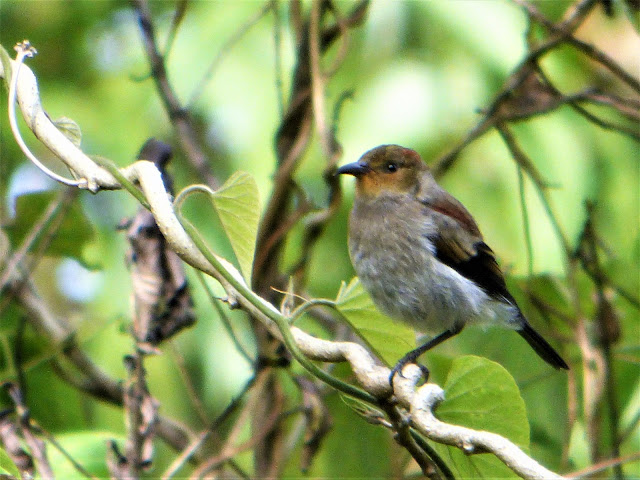