Speaking of California Endemics, Here Are Some Yellow-billed Magpies, Found Nowhere Else in the World 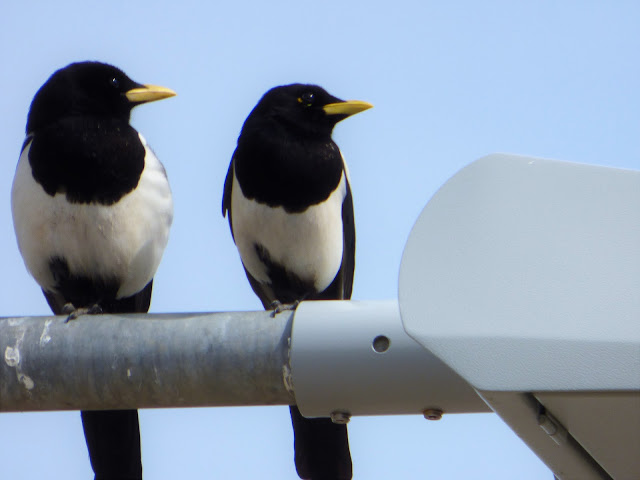 The Sierra Nevada is a barrier to more than just humans. Magpies "invaded" the western United States from Asia perhaps 3-4 million years ago, but the populations became isolated as the Sierra rose to higher and higher elevations, separating the Great Valley and Coast Ranges from the rest of the west. Eventually there were two races of magpie, the widespread Black-billed Magpie found across the western states from Canada to Mexico, and the Yellow-billed Magpie (Pica nuttalli), endemic only to California. There is very little mixing of their ranges.

They are entertaining to watch, and are easily seen in my area. I saw these two apparently having a quiet argument on top of a street light ("I'm not speaking to you!") on the west campus of Modesto Junior College (actually, they were just sitting and watching things; I'm not supposed to anthropomorphize animals). Most of the time they are kind of raucous.

They used to be more numerous, at times forming large flocks, but they were decimated, almost catastrophically, by the West Nile Virus. Beginning about 2005, between 50-75% of the population was killed off, until the few resistant ones could begin to reproduce in larger numbers. The birds are making a fairly decent comeback. It would have been a terrible shame to lose them. 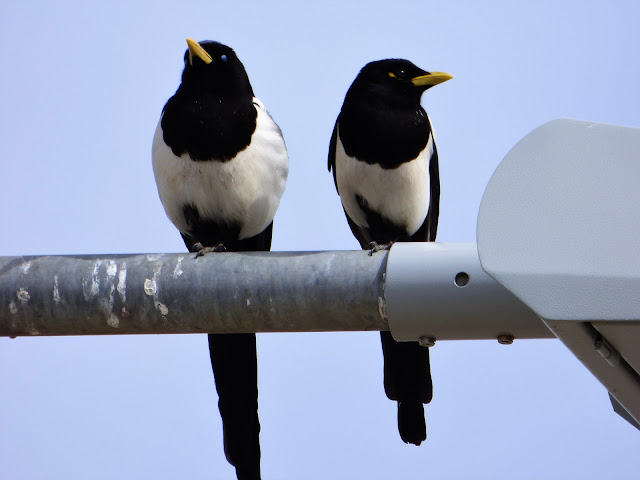