The Tropical Migrants Are Arriving! Bullock's Orioles on the Tuolumne River

There is a lot of anticipation in this bird-watching business. You know they're coming, you're anxious to see them arrive, but you just don't know when or where that first moment is going to happen. It's been that way for me for several weeks now, wondering when the tropical migrants are going to start arriving at the Tuolumne River, especially the Orioles and the Grosbeaks, a group of the most beautiful birds there are. 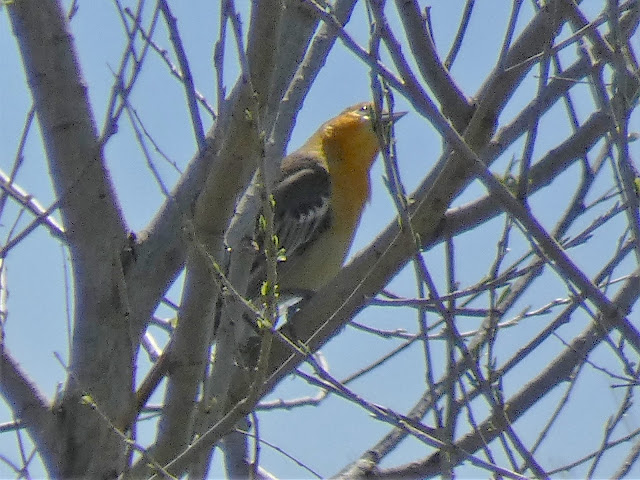 The first of them arrived a week or two ago when I spotted the first Western Kingbird (pictures soon), and then a Rufous Hummingbird. Then reports starting coming in from other parts of the county of the arrival of Hooded and Bullock's Orioles, and Black-headed Grosbeaks. When would they arrive at the Tuolumne River Parkway Trail?

In a sense, I kind of knew it had to be today. I started out walking and my camera battery registered a single bar. It was almost dead. I always carry a spare, so I replaced the first battery only to find that the second one was dead. I had traded one out earlier in the week and forgot to charge it! I did a two-hour walk with a camera that was mere moments from dying, and Murphy's Law kind of dictates that if I was going to see any kind of rare or unusual bird (or Sasquatch for that matter), that my camera would be dead. 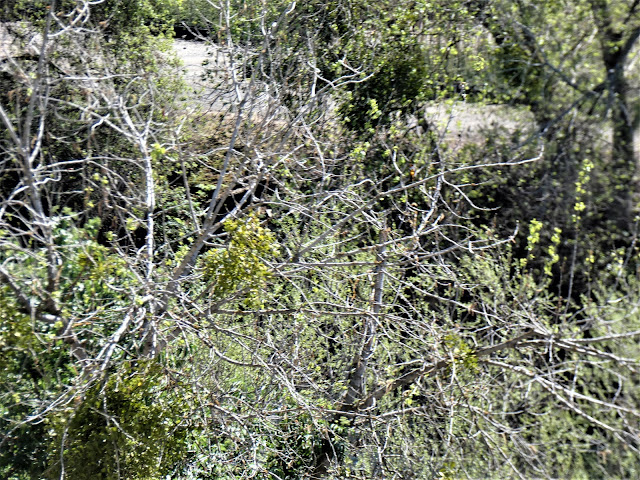 But I plugged along. A bird flew out of the foliage overhead that I assumed was a Starling, but my after-memory told me it had some yellow coloration. I couldn't find it, but then a second bird flashed yellow in front of me, and I knew I had one of them. I saw it land in a tree two hundred yards away, so I took a panicky first shot thinking I might not have another chance. Here's a challenge for you...can you see the Bullock's Oriole (Icterus bullockii) in the picture above?

I zoomed in and got the picture below, which is not a great shot by any means, but would suffice to confirm my identification of the bird. And then another pair of birds flew out. One of them was a female, and it landed in the middle of a tree, but I managed to get an ID shot (the second shot above). Then a male flew back to the shrubs they had originally come from and quite literally posed for its glamour shot, which turns out to be one of the best shots I've ever gotten of one of these beautiful birds. 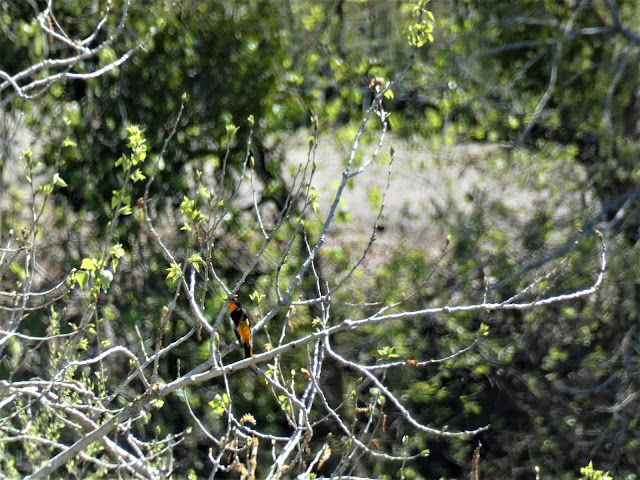