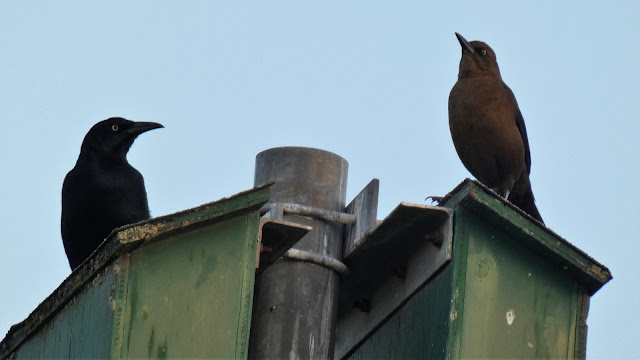 I haven't seen too many birds at CSU Stanislaus of late. Ever since Daylight Savings, I've been arriving on campus after dark, which is good for seeing the Black-crowned Night Heron in Willow Lake, but not much else. It is finals week, so I arrived a few minutes before sunset yesterday to get the exams ready and I decided to take a quick stroll. I noticed a pair of blackbirds that seemed larger than expected. I then saw how they were holding their heads (beak pointed towards the sky) and realized they must be Great-tailed Grackles (Quiscalus mexicanus).

In a world where most birds are under severe stress from habitat loss and other problems, the Grackles are thriving. They've "invaded" much of the United States from the south (they were originally a tropical species), but they aren't invasive in the usual sense of the word (they are not an unnaturally introduced species like the Starlings or European Sparrows). They do well in human habitats, and the warming climate allows them to thrive at higher latitudes. They've spread naturally.

Still, it was a bit odd to see them yesterday. They usually arrive in the spring and hang out during the summer months and then disappear again, but these two apparently like the accommodations at the University and have lingered into the colder months. 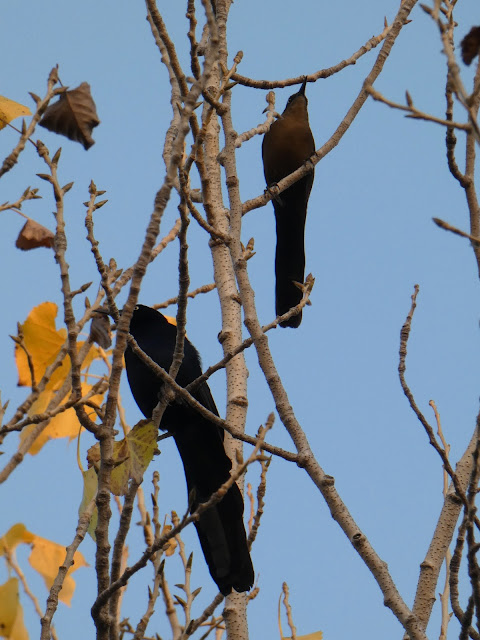