A Truly Rare Sighting at CSU Stanislaus: A Sage Thrasher 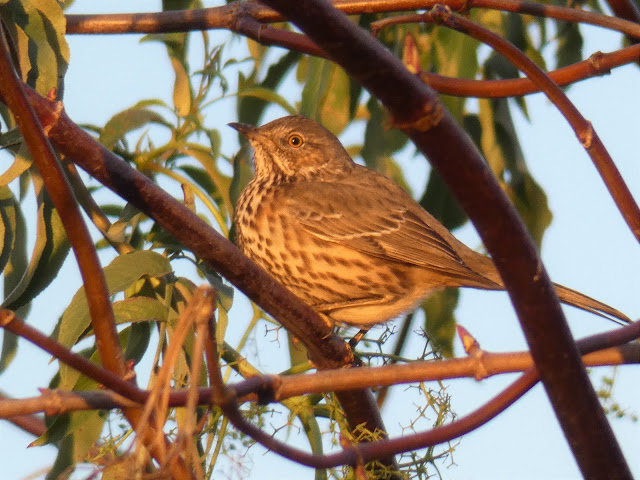 The Grackles that I saw on Wednesday were a little bit unusual for this time of year, but today's sighting is truly rare: A Sage Thrasher (Oreoscoptes montanus). This is only the thirteenth sighting of the bird in Stanislaus County ever according to eBird, and is only one of four seen in Northern California in the last month.

I certainly can't take credit for finding it. Another birder, L.D. Scott, saw it for the first time on the Dec. 6 and identified it. He showed me where to look on Wednesday (an elderberry bush along Monte Vista Avenue on the "Trans-California Trail"), but I didn't see it until today when I had a last pre-Christmas errand on campus. I saw L.D. and several others gathered in front of the elderberry, and I joined them in getting photographs.

As the name implies, the Sage Thrasher is more a denizen of the Intermontane West, the high sagebrush prairie that extends across the Basin and Range Province of Nevada and Utah. It migrates as far north as the Canadian border and winters in the southern part of Arizona, New Mexico and Texas as well as northern Mexico. I've seen them once before, but in a more normal habitat in the sagebrush flats around Mono Lake. It was a privilege to have one pop up in my local neighborhood. 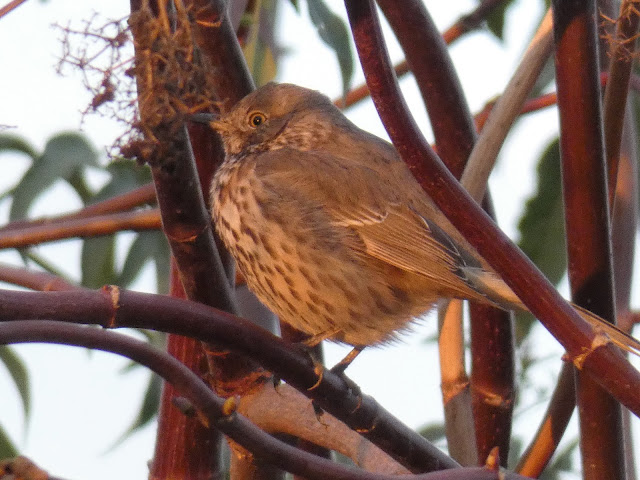