Bird of the Day: The Cedar Waxwings are Back! 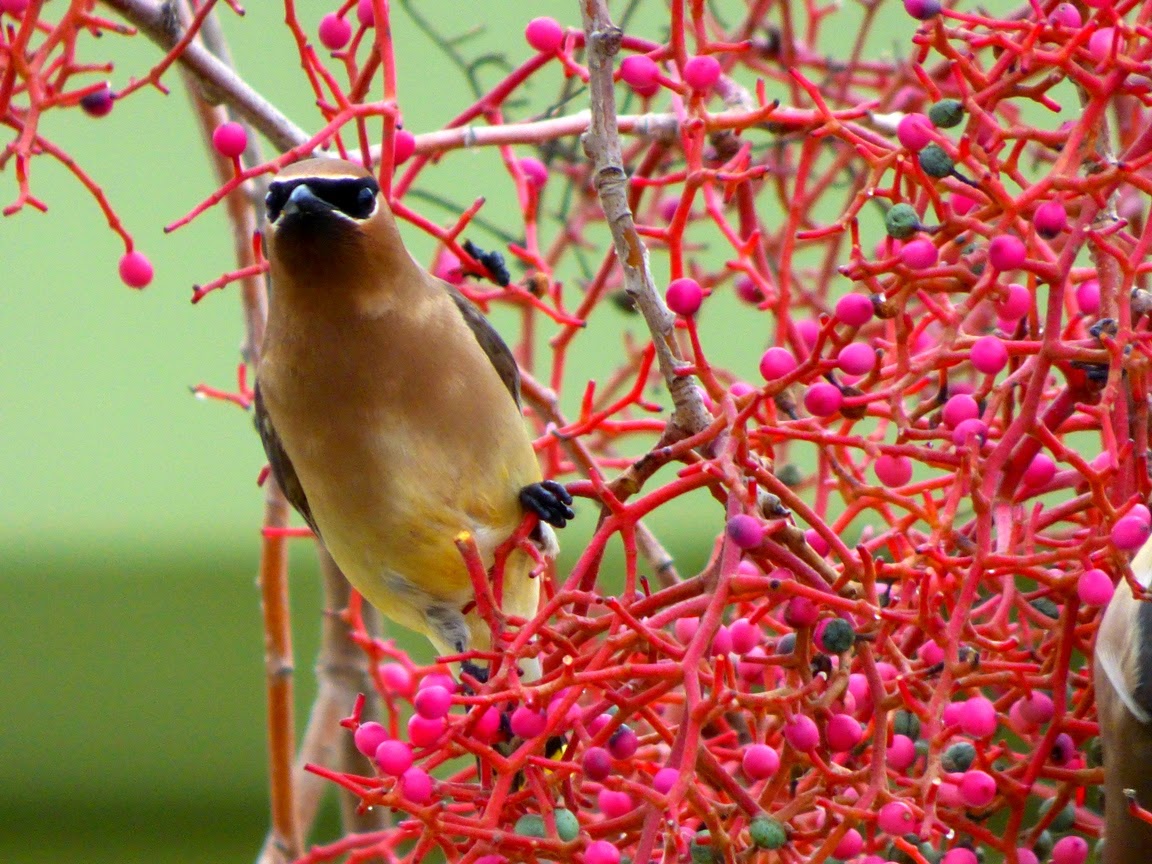 I love the moment when I realize the Cedar Waxwings are back. They are pretty much the most colorful bird that ever visits my home neighborhood. Based on my extensive observations (of one year duration), they come through our village, eat up as many berries and fruits as they can find, spend a few nights in my flowering pear tree, and then move on. 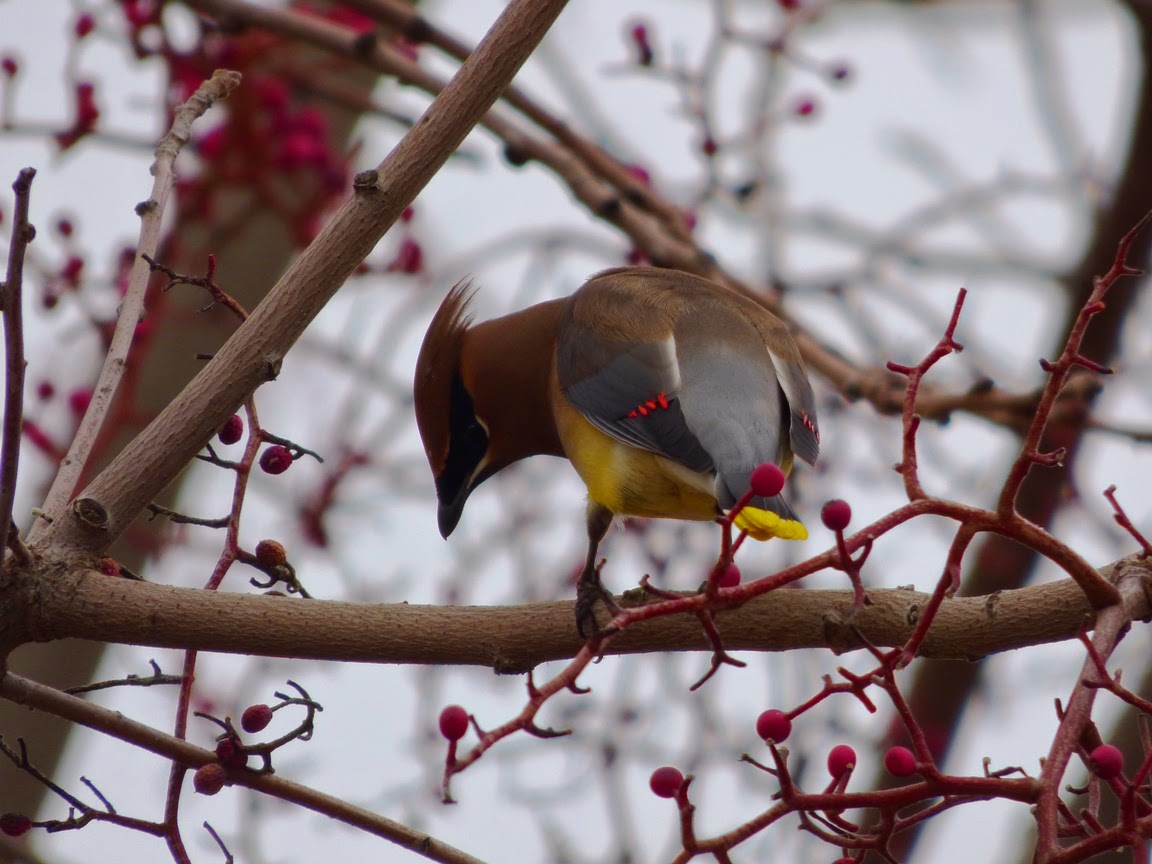 The Cedar Waxwings (Bombycilla cedrorum) breed in Canada and otherwise spend summers north of my Great Valley town. They will winter as far south as Central America, according to the Cornell range maps. The name "waxwing" derives from the bright red waxy deposit on their wingtips (best seen in the photograph above). 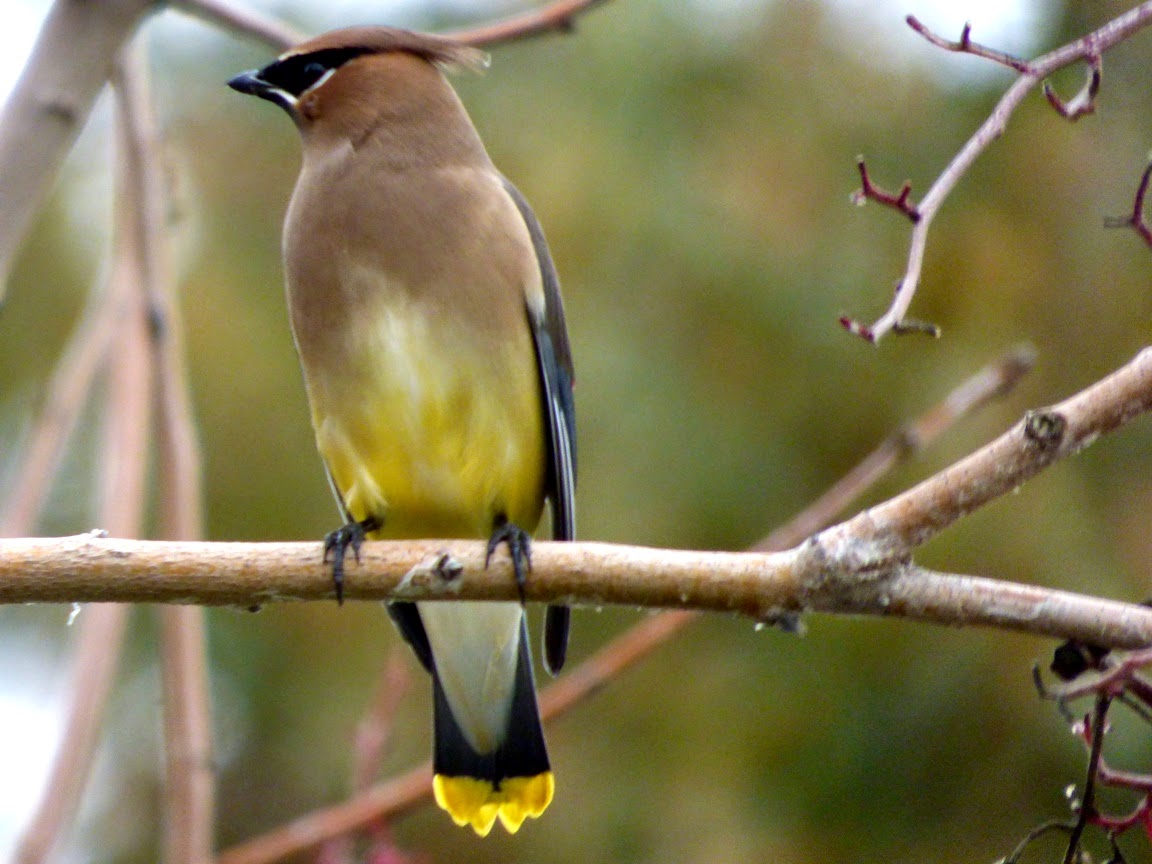 In a way, the Cedar Waxwings paved the way to my starting this blog. I've been blogging over at Geotripper for something like six years, and birds were beginning to make more and more appearances on a blog that I mostly devoted to geological subjects. I actually apologized in this blog post post about Cedar Waxwings for putting in too many bird posts (no one was complaining, mind you). As my catalog of avian photographs grew, I realized I wanted to start a separate blog for my new-found hobby. The nice thing about blogging is that you don't have to be an expert, so here you have it, an amateur bird journey. 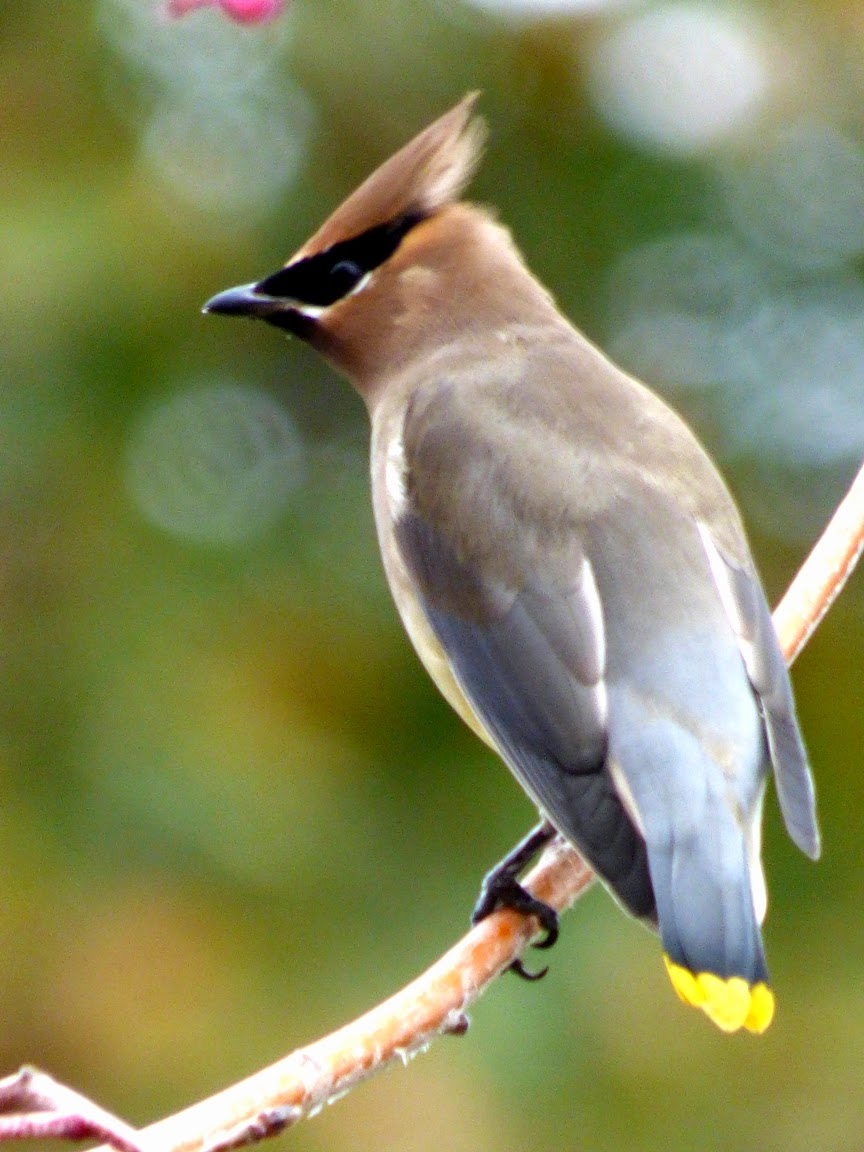 The Waxwings can pretty much survive solely on fruits and berries, which has two profound effects on their well-being. Cowbirds will sometimes lay eggs in Waxwing nests. Like many other birds, the Waxwings won't recognize that the big chick isn't one of their own, and will feed them. Unfortunately, the Cowbird chick can't thrive on fruit alone, and often dies. On the other hand, some fruits will start to rot and ferment. Cedar Waxwings have been known to get drunk, much to their detriment (just like human drunks!). 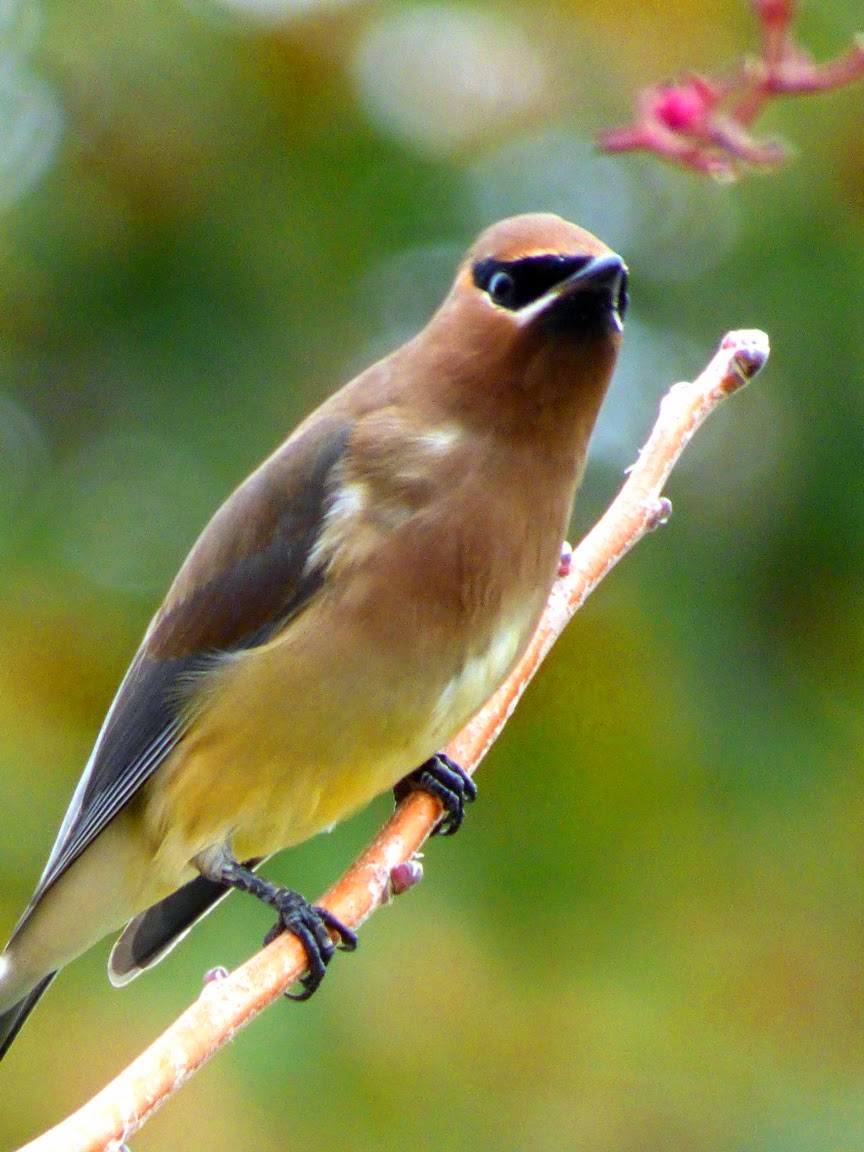 The Waxwings are gregarious and gather in fairly large flocks. There were at least sixty or seventy of them in the two trees I was standing under this morning. A similar number of them roosted in my flowering pear tree last January. I have to admit that they creeped me out just a little back then. I had pulled up in the driveway after a late evening at the lab when something made me glance up. They weren't making a single sound, or moving, but sixty or seventy birds were staring at me. I had a brief moment of Hitchcockian angst. All was forgiven the following morning when they gamely let me photograph them from a close angle. 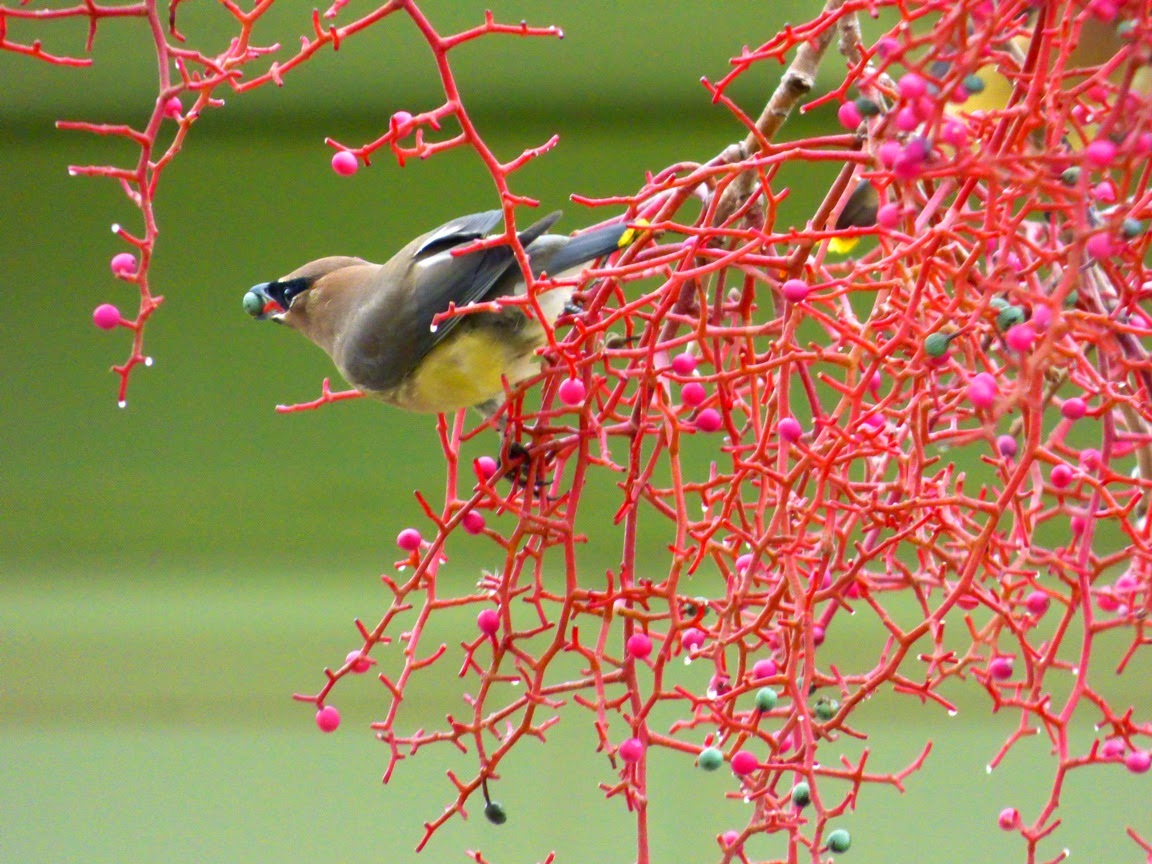 I hope they'll hang out a bit longer and find their way two blocks to my front-yard tree. They are such gorgeous birds! 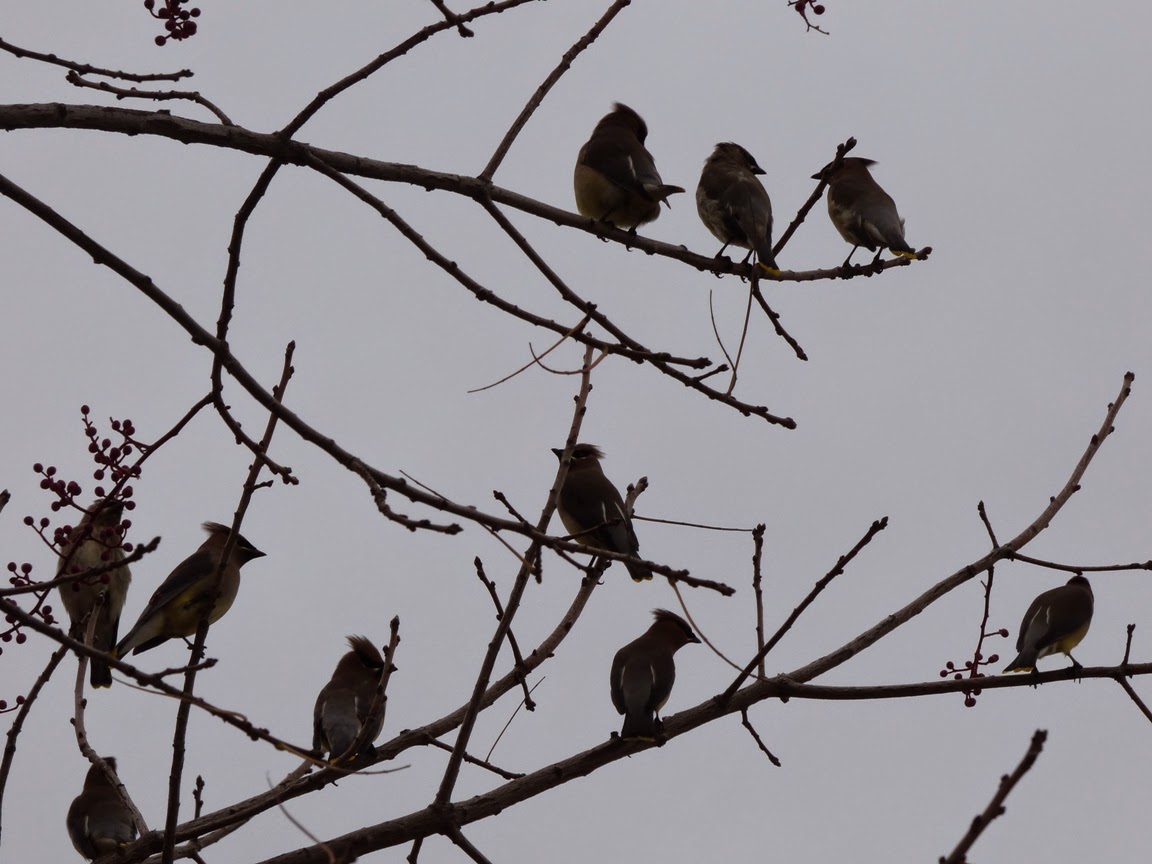