A New Bird on the Tuolumne River! A Pectoral Sandpiper 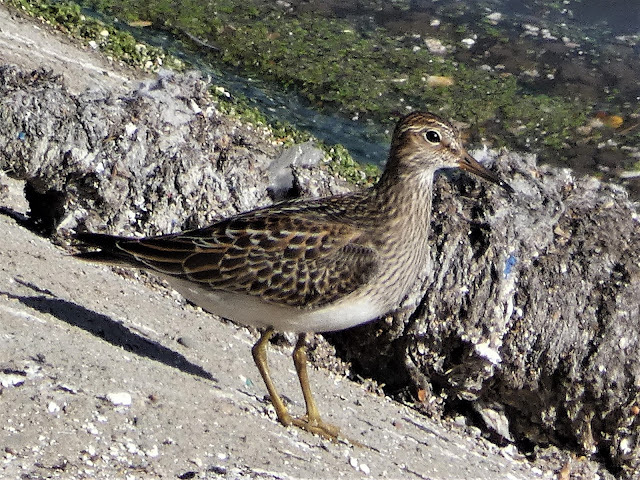 I always seem to have to say that I'm really new at this birdwatching business, even though it's been going on for five or six years. The problem is that I get pretty good at identifying the birds I see often in my travels, especially along the Tuolumne River Parkway Trail that I walk almost every day. If I see something out of the ordinary, I usually know that it is something that I have to try and photograph and identify. But sometimes I miss things that are staring me right in the face. It's a case of seeing what you look for, and not seeing what you are not looking for.

For years, I've been watching the couple of species of shorebirds that hang out at the water treatment plant on the midway part of the trail. There are almost always Greater Yellowlegs, Least Sandpipers, Spotted Sandpipers, and Killdeers. I get to the point that I don't think other birds will show up, so I don't look for them. This is usually a bad idea in birding!

So it took another birder, someone more perceptive than I, to wander along the bluff, watching the shorebirds in the treatment plant ponds. Yesterday that person was fellow nature blogger Siera Nystrom (Natural History Journal) who walked the trail and noticed a bird that was not like the others. She got some pictures and reported that she had found a Pectoral Sandpiper (Calidris melanotos). It's a special find, as it is rare in the region. It's the first sighting in the county this year, and only the 12th sighting of all time on eBird in the Stanislaus region. The nearest other known bird of this species is presently at the Merced National Wildlife Refuge an hour to the south of the Tuolumne River. So all in all, quite an accomplishment for Siera, and for the bird itself, which happens to be on a very long journey. 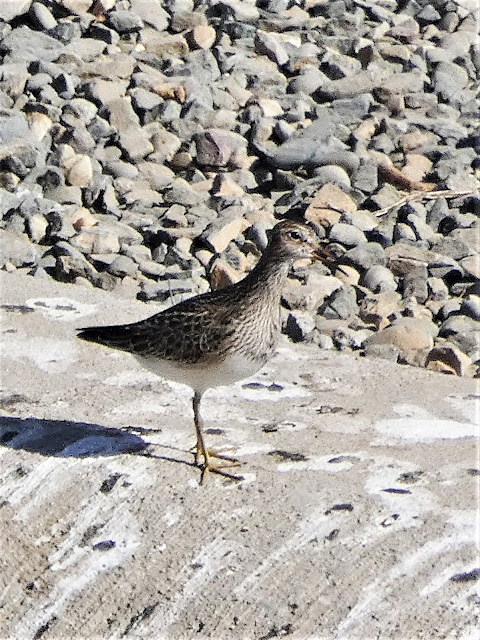 The Pectoral Sandpiper is rare around here because the bird is only passing through on a very long migration, and the routes the species follows are mostly in the eastern United States. That migration is pretty extraordinary, as the bird breeds in the far Arctic north, but migrates in winter not just to Mexico or Central America, but into the southern parts of South America!
Once I saw Siera's species report, all I could do was sit on my hands and teach my courses all day. I waited very patiently while the students finished up the last of their labs, and I rushed out to the river trail, camera in hand, hoping against hope that the bird would still be hanging out at the treatment plant. Much to my relief, I saw it right away, because as I said above, "you see what you are looking for". I was able to get a fair number of decent pictures to share. If you decide to seek it out, it is a medium-sized shorebird with yellowish-olive legs. It's slightly bigger than a Killdeer (I think), and definitely smaller than a Greater Yellowlegs. The most distinctive coloration is the brown streaks that run down the breast, but abruptly change over to a white belly. 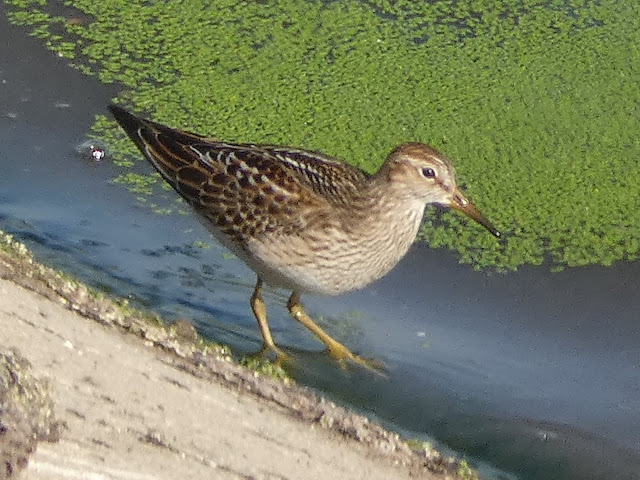 I tried to get a better shot, but this was a Greater Yellowlegs behind the Sandpiper... 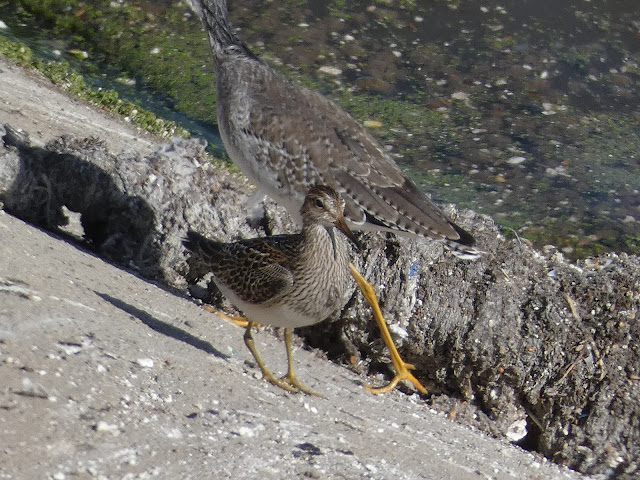 There is one other point of distinction about the discovery of this Pectoral Sandpiper. It is the 150th species reported for the Tuolumne River Parkway Trail! It is also the 123rd species seen this year on the river, which is a one-year record, and we still have three more months to find a few more.