The Bird That Shouldn't Be There: Hooded Oriole on the Tuolumne River 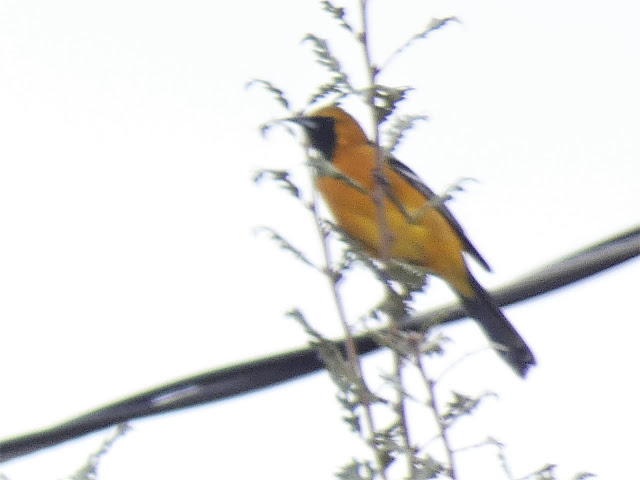 Today's walk along the Tuolumne River was extraordinary. I got there just as the latest storm ended, so there were no people on the trail, but lots of birds were enjoying the respite from all the hikers and exercisers. I counted 29 species, including one bird seen for the first time on this stretch of the river, a Bufflehead. There were also some that I haven't seen in a long time, including the first winter arrival of the Common Goldeneye, a flock of Northern Shovelers, and a Green Heron. It was actually kind of astounding.

But nothing surprised me more than the bird I saw on the top of the bluff at the east end of the water treatment plant. At first, I only saw the shape, and I thought it might be a mere Mockingbird, but something about it made me flip on the camera and take a closer look. I saw the bright yellow breast, the black chin, and my jaw dropped. It was a Hooded Oriole!

To understand just how odd this is, is to realize that the Hooded Oriole (Icterus cucullatus) is a bird of the tropics, and we are at the northern end of its range here in the Central Valley of California...in the SUMMER. They all migrate to Mexico and Central America for the winter. Literally all of them. There have been just three sightings of Hooded Orioles in California in the last 30 days, and all three were in southern California.

I don't know the story of this particular bird. It was hanging out just a few hundred feet from the palm trees where some Orioles nested last spring, so this could be one of the individuals that I photographed many times last summer. Maybe it was injured in some way and wasn't able to join the migration. Or maybe it just missed the bus. But in any case, I saw a bird today that shouldn't be there. Which explains the poor quality of the picture: I barely had time to focus before it flew away.
Posted by Garry Hayes at 9:53 PM