Any Day that includes a Phainopepla is a Fine Day 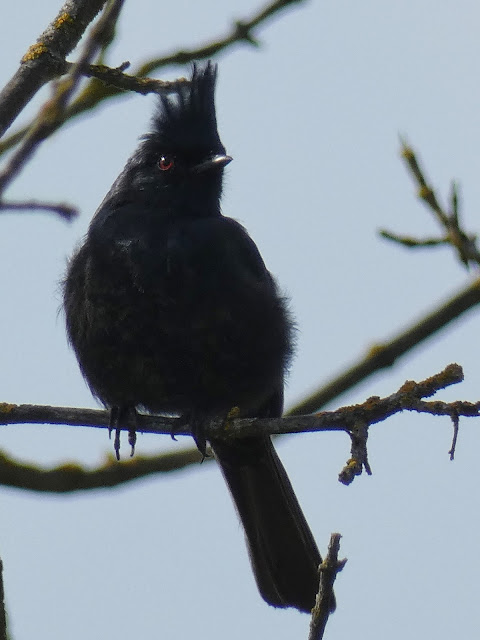 So here's the story about this bird, a Phainopepla (Phainopepla nitens). They are one of my favorite birds, in part because I don't see them all that often. They are really birds of the desert southwest, a bird of arid regions. They don't even drink water, instead drawing their liquid needs from the berries that they eat. They are found in Northern California, but are not all that common. Months will sometimes go by between sightings on my favorite birding trail along the Tuolumne River in the lower Sierra Nevada foothills. That pattern was holding this year, as I hadn't seen one since December (except for this one on January 5 a dozen miles upstream).

The other day I was walking with a few friends, and on the spur of the moment I asked them if they had ever seen a Phainopepla. They hadn't, so I was describing them, their black color, their red eye, their crest, and so on, and we turned a bend on the trail. And there, for the first time in months, was a Phainopepla! Right next to the trail. I was just stunned. But also delighted, so I started snapping pictures.

And then, much later in the day, I was five miles downstream at Fox Grove on the Tuolumne River near Geer Road (actually I was supposed to be picking up dinner at the Fruityard). I was watching for birds of course, and what do you think I saw? Of course, it was the second Phainopepla in one day. 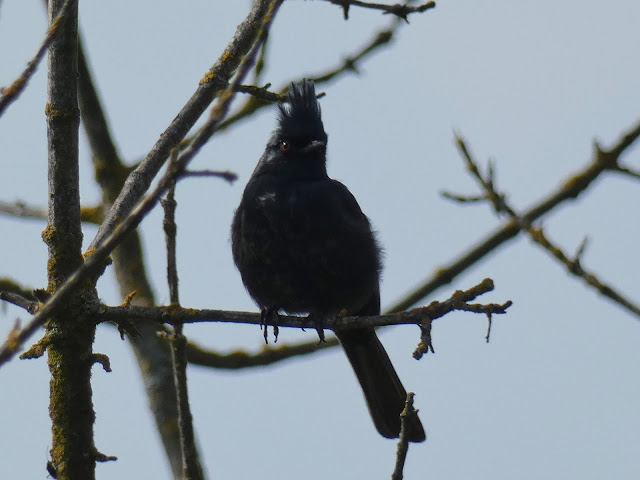