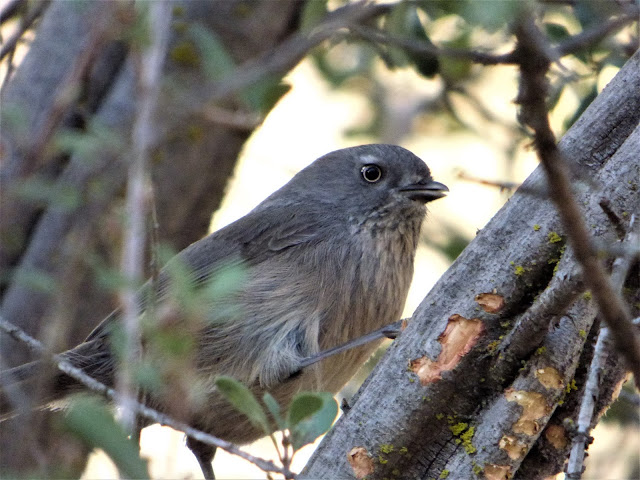 I hope you enjoy this picture, because it was a lot of work to get it! It's my first sighting and first ever picture of a Wrentit (Chamaea fasciata). I got the picture while hiking in Pinnacles National Park in the Central California Coast Ranges. I was on the Six Bridges Nature Trail in lower Bear Gulch on the east side of the park when I noticed some small birds hopping through the shrubs next to the trail. Most of them flushed as I walked by, but one of them kept searching for bugs on the far side of the bush. I stood quietly, hoping it would move into view, because I could see it was a new species for me. The intense eyes were intriguing. I wasted ten shots as it moved around, and it finally came into view and I got the only picture I was happy with.

The guides describe the bird as hard to see, and I have to agree! It is a species of the west coast of North America, living in chaparral and thickets in the coastal mountains and Sierra Nevada foothills. Its range extends from Oregon to Mexico. Although the name mentions two different groups, the wrens and tits, it is actually related to neither. There are no similar species in North America. According to the Cornell bird site, their closest relatives are in Africa, Spain, India, and China. The site also mentions that they may be most sedentary bird in North America, as they tend to range no more than 1,300 feet from their birthplace.

It's always a thrill to add a new bird to your list!
Posted by Garry Hayes at 9:45 PM