At Least He Isn't Lonely...A Second Hooded Oriole This Winter on the Tuolumne River! 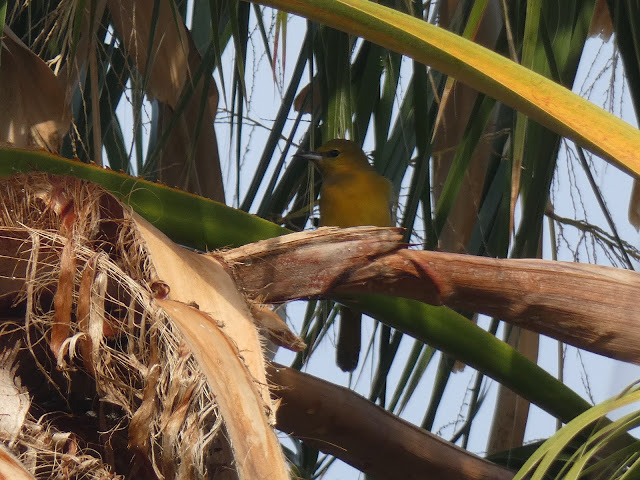 The other day I posted about what I thought must be the loneliest bird in all of California. There was a male Hooded Oriole (Icterus cucullatus) hanging out near the oriole nesting site on the bluffs above the Tuolumne River, and they are not supposed to be here in the state right now. Literally all of them migrated to Mexico and Central America many weeks ago, and there have been no sightings of any in the state in the last month except for three birds in the far south part around San Diego.

So I was on my walk today and of course I was watching out for the Oriole and much to my surprise, there it was. Except something was different...it didn't have the prominent black chin patch that distinguishes the mature males. The one last week did. I can now say there are TWO Hooded Orioles in Central California, and they are probably hanging out with each other (the site was only a few yards from where I saw the other one last week). This one is either a female, or an immature male. I don't know why they are still here, but I've developed a complicated hypothesis...

I've been seeing all the "traditional" Christmas movies this week, "National Lampoon's Christmas Vacation", "Elf", "Home Alone", "Die Hard", and so on, including the great classic (biting my tongue as I say that) "Christmas with the Kranks". If you aren't familiar with the premise, the Kranks were going to have their first Christmas without their daughter (who was in Peru), so they decided to skip Christmas and take a cruise in the tropics. Their daughter decided to come home, and hilarity ensued (sort of).

Regarding these two Hooded Orioles, I see kind of an opposite situation. I imagine I heard this conversation between them...

"Look, EVERYONE is migrating to the tropics for Christmas. They ALWAYS do, and it's a long way, and hard and dangerous. I think we should just stay put and skip Christmas this year."

"I don't know, Luther. There must be a reason everyone goes. But okay, if you think it's a good idea"

"Luther, if you ever have a feather-brained idea like this again, keep it to yourself..."

Does anyone have a better idea? 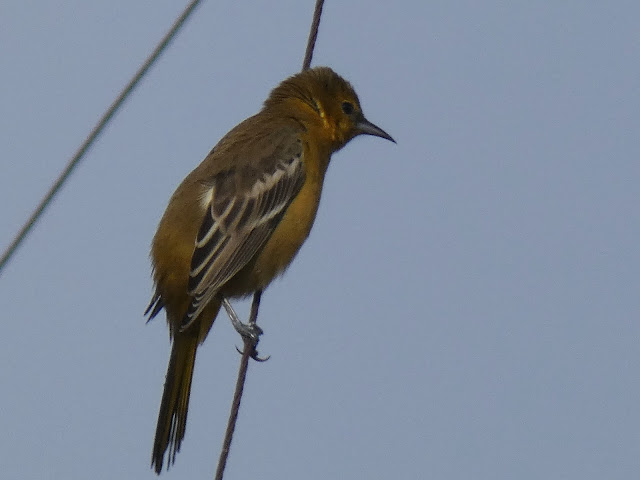