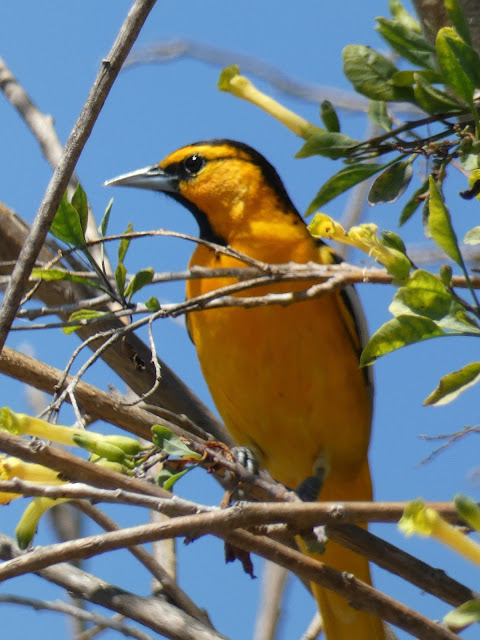 One of the really nice things about walking the same trail (the Tuolumne Parkway Trail in Waterford) three or more times a week is that one can get to know individual birds and their habits. As I hike along, I'm always watching out for the species that I know are rare or exotic (just today I saw Cinnamon Teal in a pond along the trail, the first time it's ever been reported on this particular stretch of the river). But there is also the privilege of getting to know the birds that are practically always around, because the river is their home. 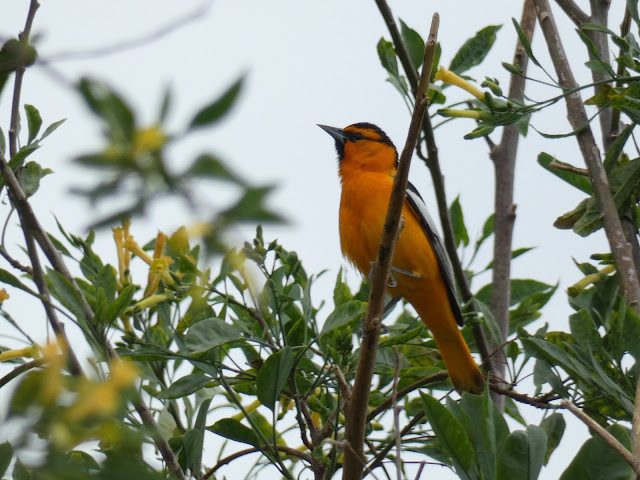 The Black Phoebes have their favorite roosting spots, as do the House Wrens, and the American Kestrels. The Mute Swans are almost always floating on the pond across the river from the western trailhead. The raptors almost seem to have specific territories (or times) along the river; the Red-tails tend to be on the downstream side, and the Swainsons, Coopers, and Red-shouldered hawks more upstream. A particular dead cottonwood tree seems to be the territory boundary, as all the birds compete for roosting spots there. Underneath them, a pair of Acorn Woodpeckers are almost always drilling away at the trunk. A Green Heron likes to lurk in the pond below the irrigation canal "waterfall". If I don't see these birds when I walk, I get a feeling that something is missing. 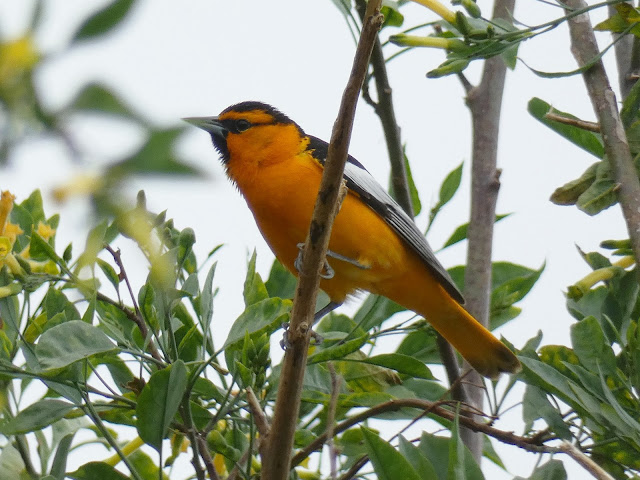 Then there are the birds whose presence is a seasonal event. I always look forward to the spring migration because the tropical migrants who are arriving tend to be especially colorful. Their arrival was something I always seemed to miss in my ignorance before I started watching carefully a few years ago. Although they provide a splash of color, they tend to be fairly rare and inconsistent in their chosen roosting and nesting spots. If one doesn't know where to look, the birds can be very easy to miss. 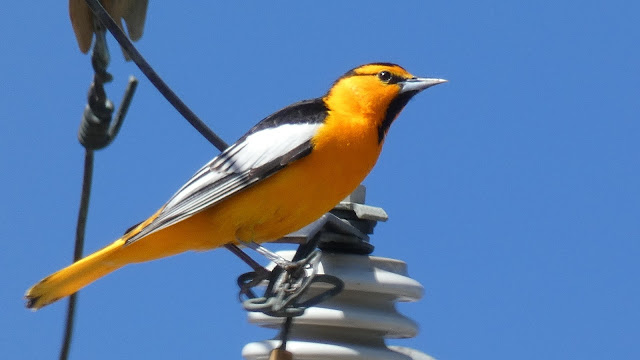 One of my absolute favorites are the Bullock's Orioles (Icterus bullockii). I only saw a few of them last year and the year before. I wasn't walking the trail consistently, and I never found the area where they were nesting. 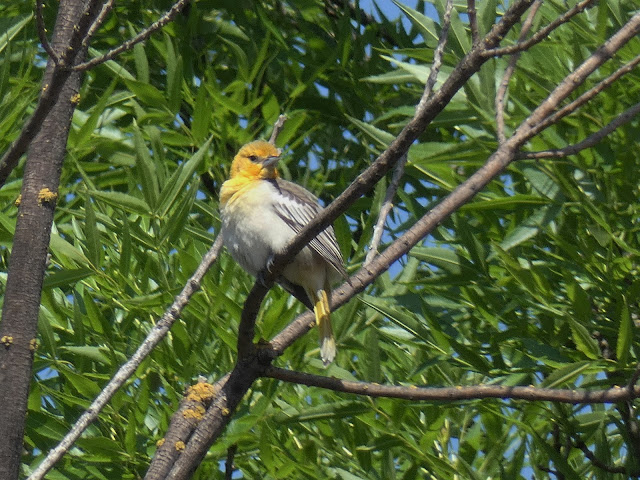 This year has been different. I haven't seen their nest yet, but I've seen a male and female consistently flying in and out of a particular palm tree on the bluffs above the water treatment plant (I hope the people living in the house there aren't too concerned about the strange man in the hat with a camera who comes and stands in front of their house every day). 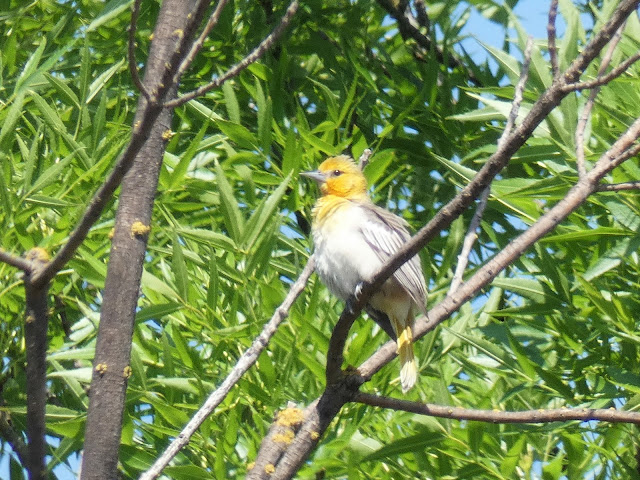 Like many birds, the females are not so brilliantly colored, but they are very pretty nonetheless. I'm hopeful that there will be some fledglings to observe before long! 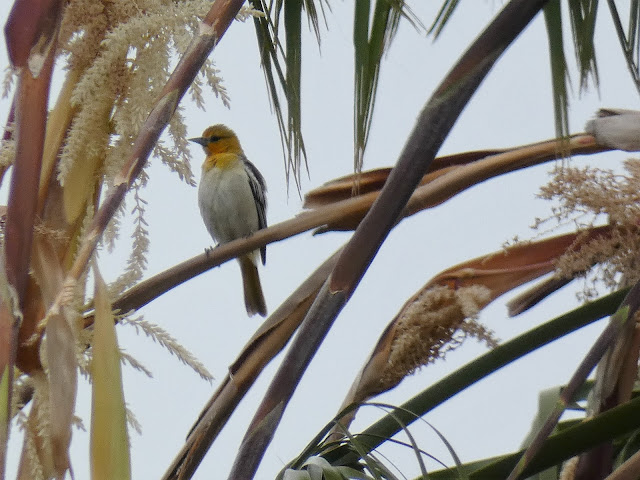 It's been about six weeks since I saw the first of the Bullock's Orioles on April 7, and I've noted their presence on my ebird lists twenty (!) times now. Some of the sightings included some nice shots that I wanted to post immediately, but six weeks of nothing but Bullock's Oriole on this blog would have maybe seemed...excessive. 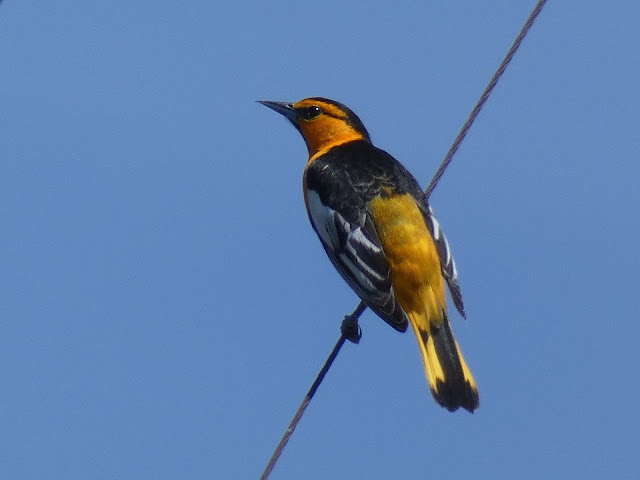 So instead, I'm taking my favorite shots from the last six weeks in a "Best of" compilation. When I see young ones, maybe I'll post again (I don't really need excuses though). In the meantime, enjoy!