You Haven't Heard of a California Scrub Jay? Evolution Explains That, Sort Of 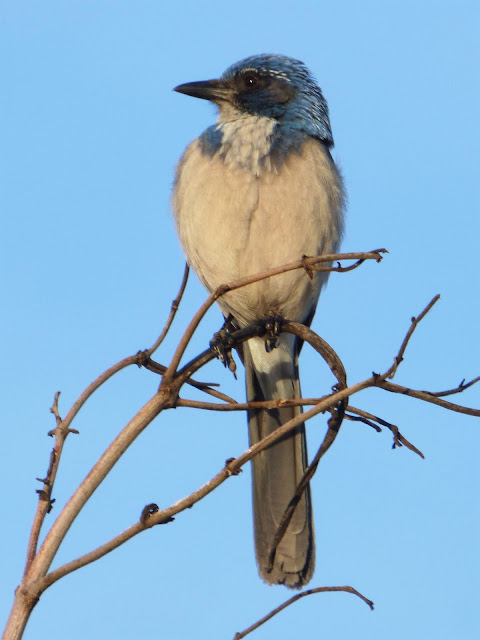 There's a maxim among field geologists...one can go through an entire field season and end up never collecting a sample of the single most common rock in their study region. We geologists know why; we arrive, note that say, granite, is everywhere, and tell ourselves we'll pick samples of that later, and then we never do. We concentrate on the exotic stuff. I've found that it is the same way with my newer hobby of bird photography. I look for the new and exotic, and end up more or less ignoring some of the most common and yet most beautiful species found in our area. I got these pictures of a California Scrub Jay (Aphelocoma californica) while I was looking for the rather more exotic Sandhill Cranes the other day at the San Joaquin River National Wildlife Refuge.

Scrub Jays are common in our area. They are in my yard constantly, sometimes to the point of obnoxiousness. We awaken some mornings because they are on our roof pounding open acorns and pecans. They feel so common that we sometimes become jaded and forget what a beautiful bird they are. This becomes all the more odd because most people in North America never get to see them, as they are only found in the western states, and when we consider the species level of things, they become even more special. Until just a few years ago, the California Scrub Jay didn't even "exist". 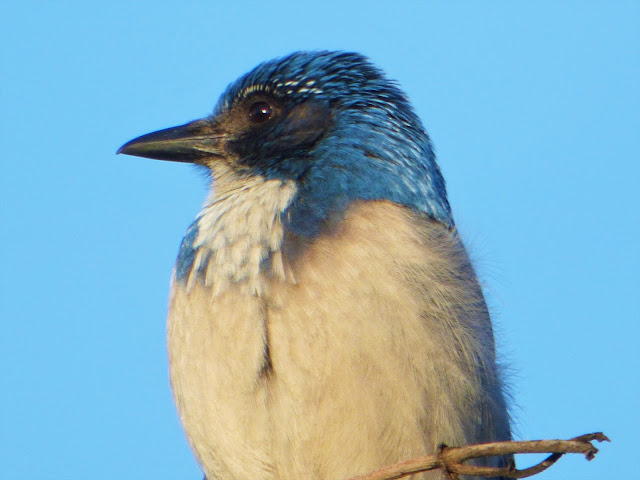 It's not that they weren't here. They've always been here. But we've come to recognize that there are significant differences between the familiar blue corvids that range widely across the western states. Those differences provide a marvelous example of how evolution works. Ornithologists now recognize five distinct species of Aphelocoma scrub jays in the United States with another two species in Mexico. The U.S. species include the California Scrub Jay, the Woodhouse's Scrub Jay, the Florida Scrub Jay, the Mexican Jay, and the Island Scrub Jay. Prior to 2016, the Woodhouse's and California Scrub Jays were considered to be the same species, the Western Scrub Jay, but there are significant differences between them, including the shape of the beak and the intensity of the color of their plumage. They are found in different environments as well.

It's the different environment that provides the example of how evolution works. The California species lives only on the coastal strip of California and the other western states, while the Woodhouse's lives in the interior, east of the Sierra Nevada and Peninsular ranges. The isolation into different ecosystems has meant that the birds utilize slightly different food sources. The California jays consume large amounts of acorn, contained in a seed cover that must be defeated before the bird can eat. The Woodhouse's jays often consume pinon nuts, which are must be dug from cones. Over the millennia the young of each species would be born with the slightest of variations in beak shape, and sometimes those variations gave an individual a slight edge in the success at getting enough of their favored food source. Those individuals were the ones that tended to survive at a higher rate, and thus they passed on their genes to future generations. In other words, the isolation of populations in different habitats gave rise to the variations that made the birds separate species. 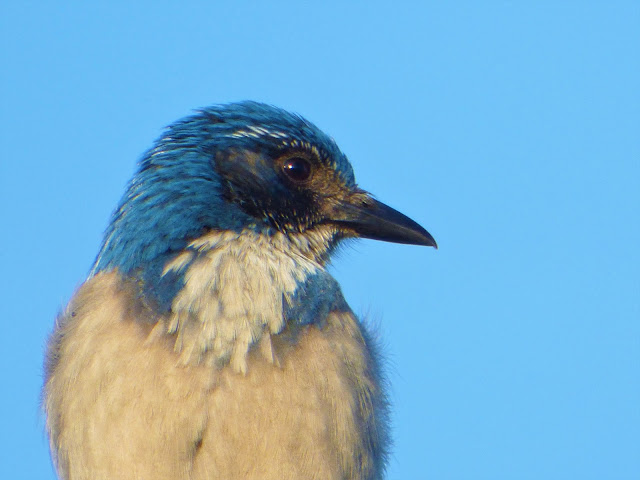 The other species display the evolutionary process as well. The Florida Scrub Jays are descendants of Woodhouse's Scrub Jays that somehow ended up in the swamps of the Florida peninsula more than two million years ago. With the isolation and different food sources, the Florida population has diverged into a new species.

Likewise, the Island Scrub Jay is also isolated. The jays won't willingly fly over large bodies of water, and thus California Scrub Jays are never found on the Channel Islands off the coast of the state. But somehow a few got to Santa Cruz Island, perhaps 150,000 years ago, and in their isolation, they became larger and bluer.

There are other more distantly related species of jay as well. The only one I have seen is the Pinon Jay that like the Woodhouse's lives east of the Sierra Nevada. I got this picture of one in Lava Beds National Monument a few years ago. 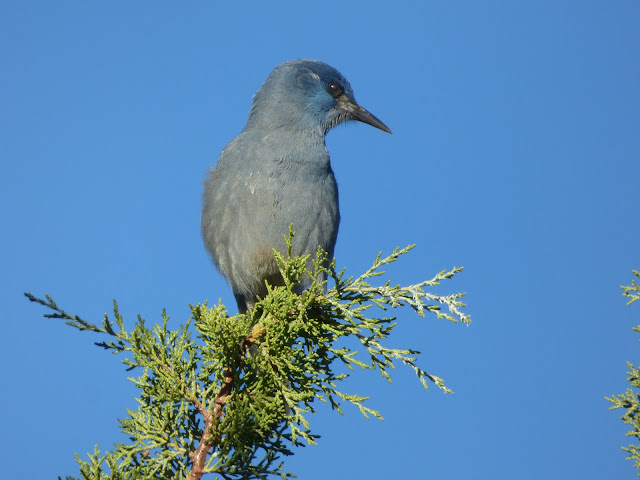 One doesn't need to travel all the way to the Galapagos or Hawaiian Islands to see the evidence of evolutionary change. The evidence might just be in your own back yard, making a lot of noise and harassing your cats.
Posted by Garry Hayes at 11:41 AM