The San Joaquin River National Wildlife Refuge is a marvelous bit of the (almost) original landscape of the Great Valley of California, combining prairie and riparian habitats in support of hundreds of thousands of migratory waterfowl. There is a four mile long hiking trail in one sector of the refuge, but only a viewing platform at the other, at the end of Beckwith Road a few miles of west of the town of Modesto. I have seen incredible sights from the platform and from along the road, but it's always been sort of a mystery as to what lies in distance, the places where the public is not usually allowed to go. 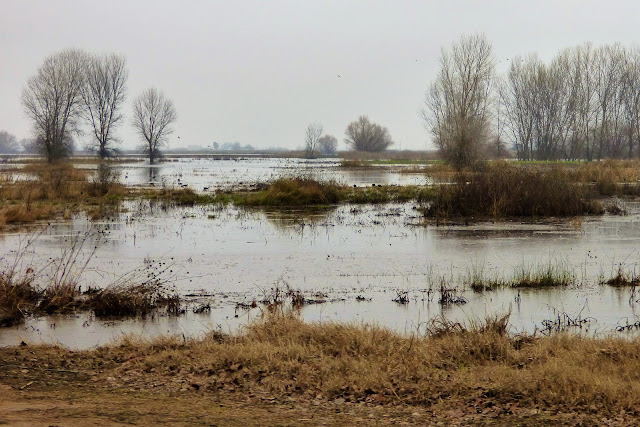 Last month, we were given the chance to find out. The refuge sponsored their first ever Goose Day celebration on January 13, and the festivities included an auto-tour into the interior of the preserve. The managers expected two or three dozen people, but got 100-200 people instead. The group worked out caravanning and dozens of cars motored their way into the refuge. 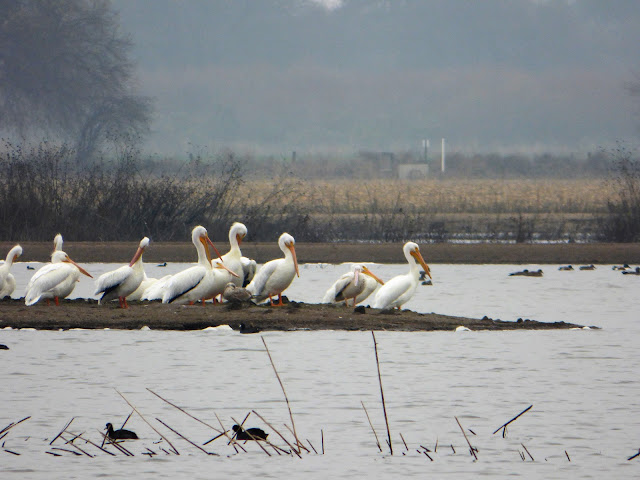 The ironic part of course is that few geese were in attendance (who could have foreseen that?). I don't think anyone who was there was disappointed. Their interest was in all of the birds who call the refuge home, and the chance to see the interior up close. Aside from a few comments about how cold it was, I heard no complaints. The most visible of the "charismatic" birds were several dozen American White Pelicans (Pelecanus erythrorhynchos) on an island in Page Lake. 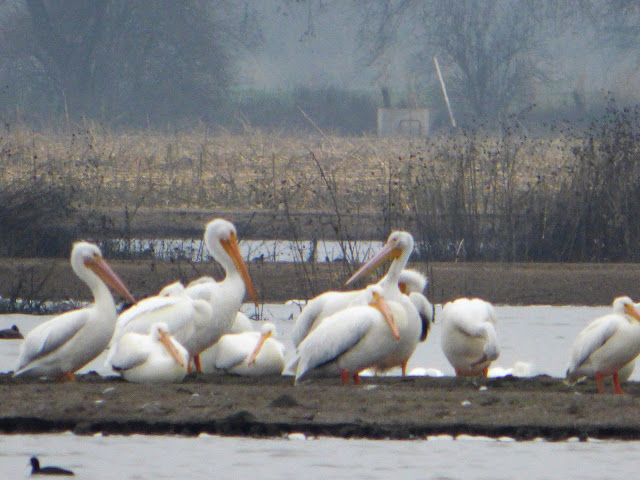 The pelicans famously scoop up fish in their bill, although they do not store them there (they swallow them right away). They don't dive like Brown Pelicans, but instead will hunt cooperatively, swimming along in a group herding the fish ahead to where they can scoop them up. 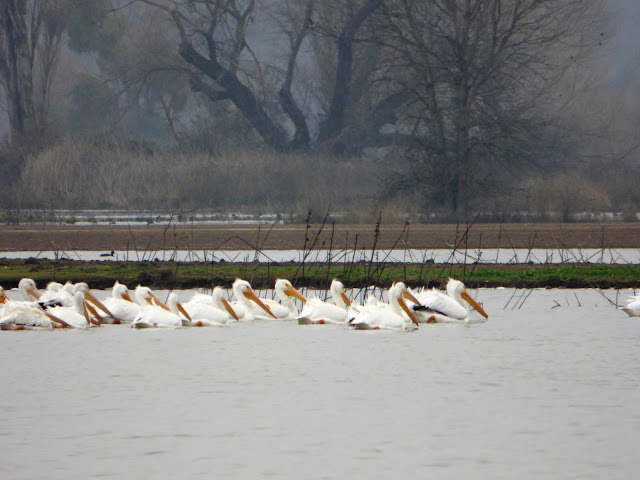 The Pelicans are doing well. Their population crashed in the middle 1900s due to pressure from hunters and fishermen who feared the birds were consuming the valuable fish species (they weren't). DDT had an effect on populations as well, as did wetlands habitat loss. Their numbers are rebounding today. 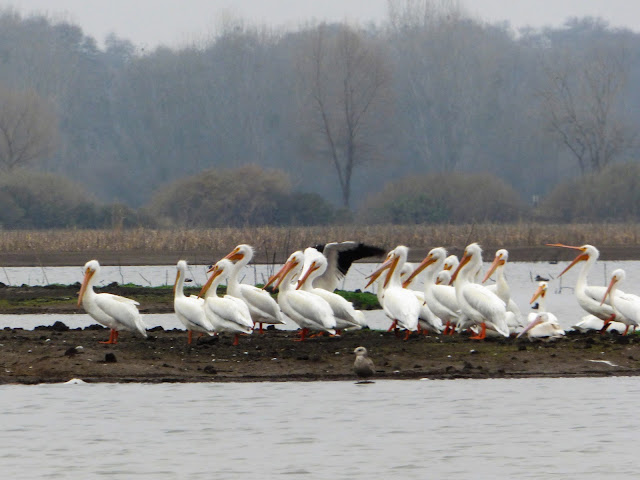 The auto-tour spent around an hour on the shoreline of the pond in the midst of the refuge. We did see geese flying overhead, and we also saw a Great Horned Owl, Sandhill Cranes, Black-necked Stilts, Yellowlegs, and numerous other shorebirds. The tour continued on the other side of Beckwith Road, following the dike along the Stanislaus River across from Caswell State Park. 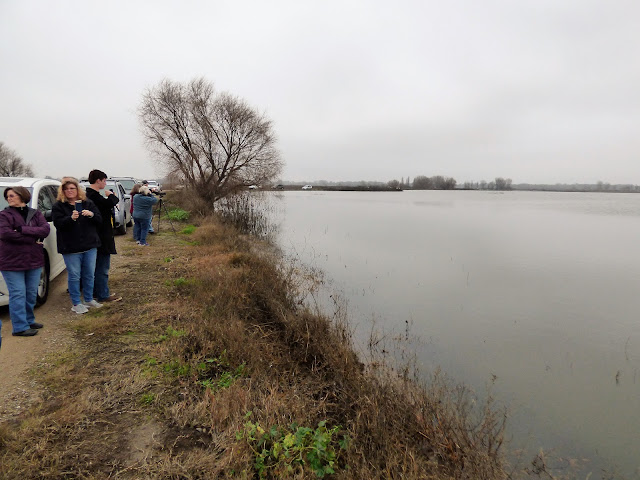 One can see why they don't want to have unrestrained public visitation. The road maintenance costs would be prohibitive. 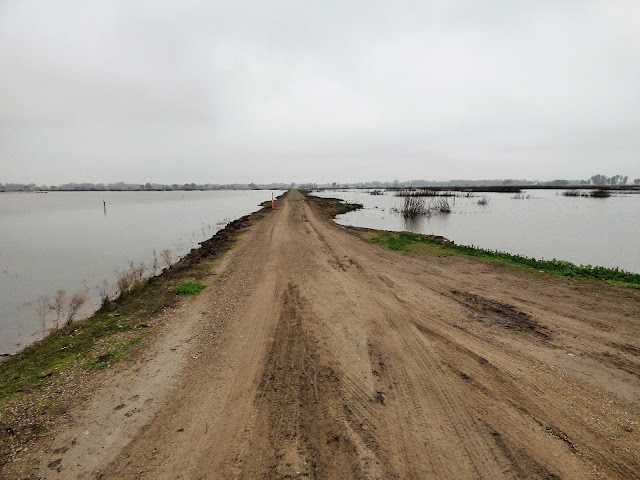 After the tour I did in fact find a couple of geese, some Snow Geese along Beckwith Road a bit west of the viewing platform. There are in fact tens of thousands of geese in residence, but during the day they range across the region looking for food. They gather at dusk in huge flocks. 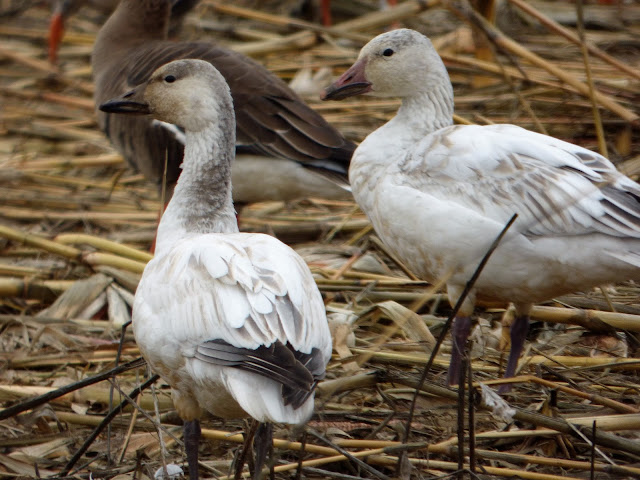 A few days later, things were back to normal, and I headed out the platform during an afternoon break. There were hundreds of Pelicans on the island, and perhaps several thousand Sandhill Cranes visible from the road. 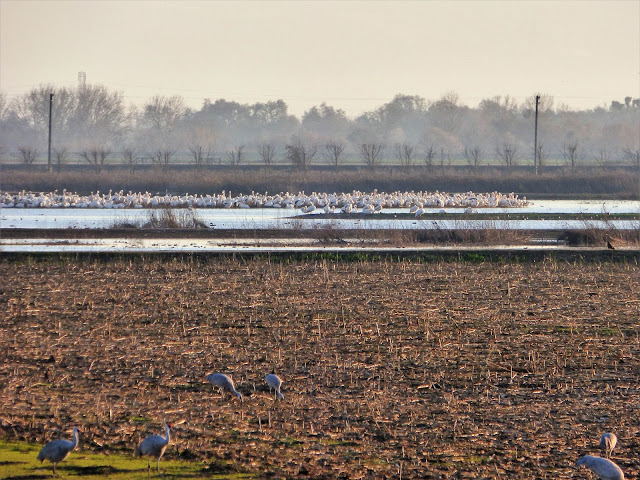