Surprise After Surprise: Blue Grosbeak on the Tuolumne River 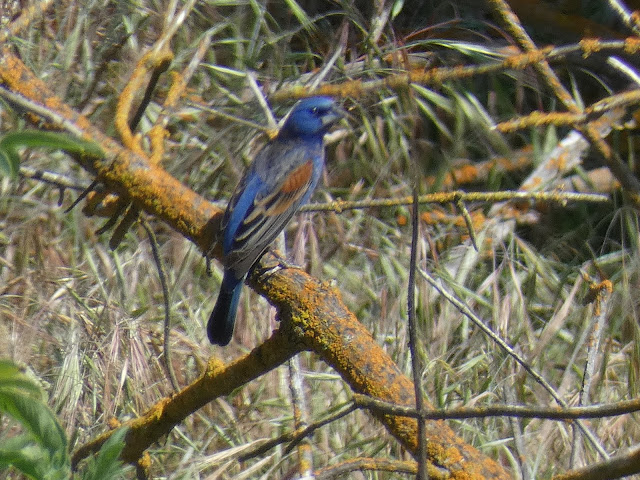 It's one of rarest and most precious of my local bird sightings: A Blue Grosbeak (Passerina caerulea). Until yesterday I had only seen three of them, all in one place, Ceres River Bluff Regional Park, over a period of just three days last summer. And someone else actually found the birds; I was following field directions just for the chance to see them. And that's it. Until yesterday, only two individuals had been sighted in Stanislaus County this entire year.

It's not hard to understand why. My county (Stanislaus) is relatively close the northern boundary of their normal range (although warming climate seems to be allowing them to expand their territory northward). The bird is a tropical migrant, so they are only around during the spring and summer.

So yesterday was the Global Big Day, where about 30,000 birders searched out and identified about two-thirds of all the bird species in the world (in case you wonder, that's around 6,700 out of 10,500 known species). I was out doing my part; Mrs. Geotripper and I set out into the prairies north and east of our town and identified birds at seven different locations (that's what we do for "recreation"). We found 47 species in total, but the biggest surprise was close to the end of the day. We were at the Robert's Ferry Bridge on the Tuolumne River in the Sierra Nevada foothills. We were checking on the Osprey and Great Horned Owl nests that we had seen several months back (Ospreys were there, the owl was not), when I saw a Bobcat wandering the bank of the river. I got one shot (below), and calmed down for a moment (I've only seen them in the wild three times). I then started counting birds again when a blue and chestnut colored bird flew through my field of view. The colors said "Western Bluebird", but I wanted to confirm, so I zoomed in on the bush, and my jaw dropped. It was a Blue Grosbeak! 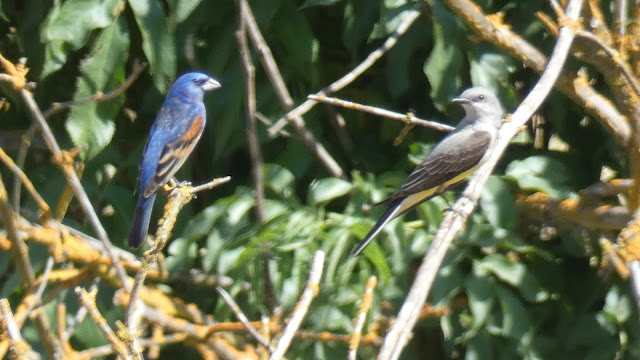 The bird seemed to be having an argument with a Western Kingbird, and I got a shot of the two of them together. After a few moments it flew off westward (hopefully about 8 miles, so I can see it along the Tuolumne River Trail too).

Those were the two biggest surprises of a day that was filled with some neat surprises. It was a lot of fun contributing to citizen science efforts like the Global Big Day. The additional vigilance added to the number of Blue Grosbeak sightings. There are now 5 or 6 known individuals in the county. 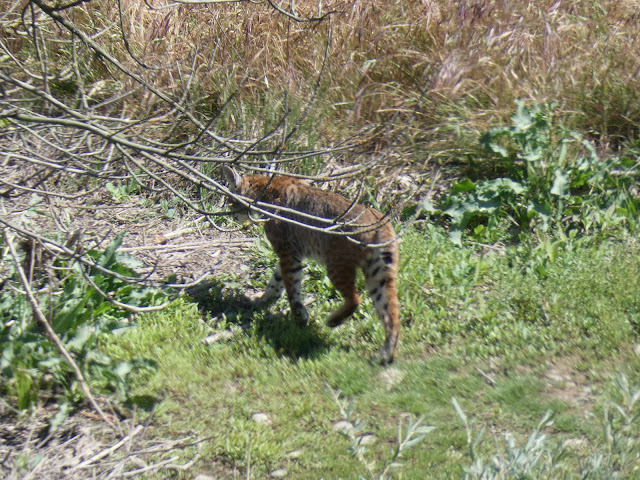