Two of the Blue Favorites in One Day! A Lazuli Bunting and a Blue Grosbeak on the Tuolumne River 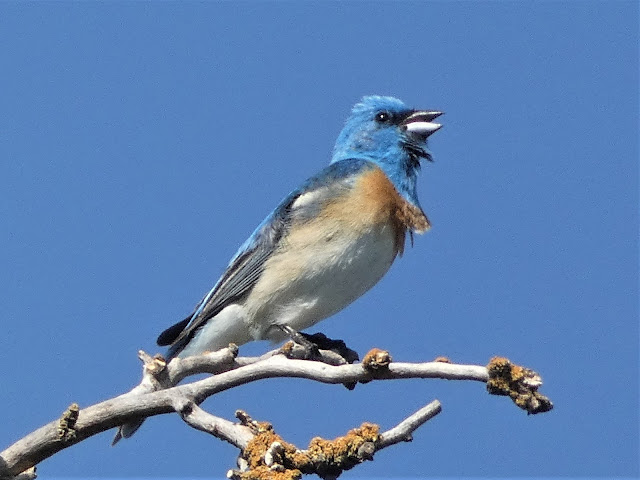 Ever since spring, and really for two years now I've been waiting to catch sight of a Lazuli Bunting (Passerina amoena) on the Tuolumne River Parkway Trail that I walk most days. I saw a plain-colored female a few months back, but I never saw a male in all of 2019.

It's nice to have good friends in any case, but it's great to have friends who also love birds and live in a place where they can clue you in to new sightings. Jeanne lives near the trail, and has had a bunch of birds singing in her trees of late, and she sighted the Lazuli Bunting AND a Blue Grosbeak (Passerina caerulea). These quite literally the holy grails of my trail travels (well, okay, along with Hooded Orioles, Black-headed Grosbeaks, Phainopeplas, and a few others). But I don't think I've seen both of the blues on the same day before. I went over and we found the Bunting and heard the Grosbeak, but none was being photogenic. 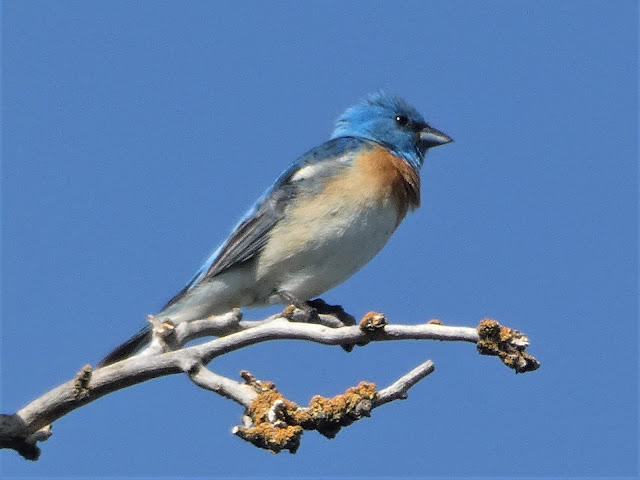 I tried again this morning, and the first bird I saw was the Blue Grosbeak in an oak north of the trailhead parking lot. It was too far for good pictures, but I can't complain because just moments later I saw a small bird perched in the sun, and there it was. The first opportunity for a good photo of a Lazuli Bunting on the Tuolumne River Parkway Trail (well, trailhead anyway). 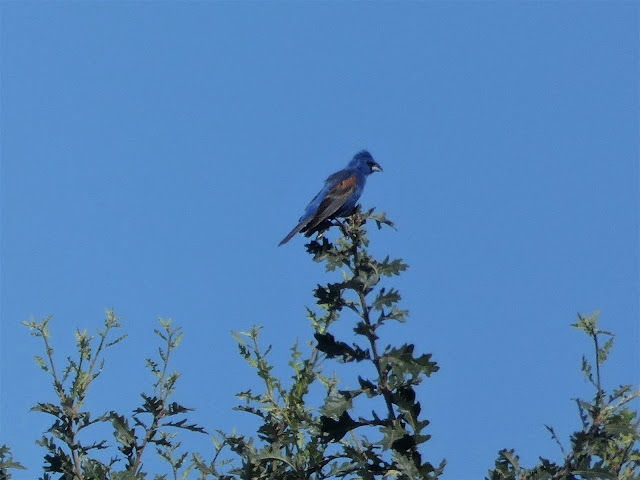 I was actually beginning to feel like there hadn't been much happening for a couple of weeks on my birdhunts, seeing the "common" species for the most part, and not much that was new. I've been cured of that in the last few days.

The bunting stayed put long enough to provide us with a little concert (if you turn up the sound). It's a pretty song.

Posted by Garry Hayes at 3:15 PM No comments:

My Favorite "Summer" Visitor: Hooded Orioles on the Tuolumne River 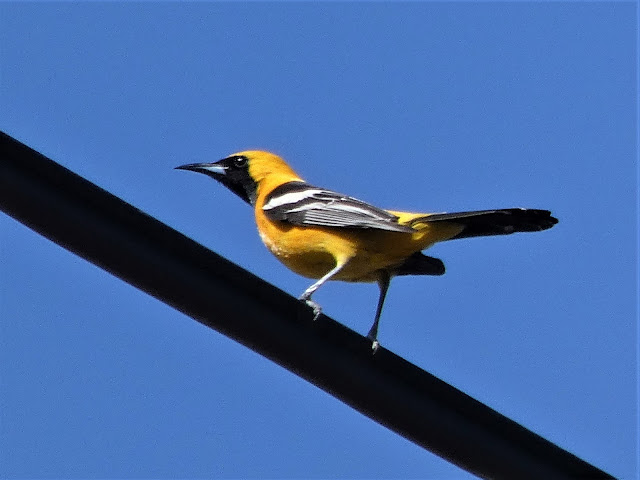 There are not a lot of places to see Hooded Orioles (Icterus cucullatus) in our county in the Great Valley of California. We are pretty close to the northern edge of their range in the United States, although they are being seen farther and farther north as the climate warms. 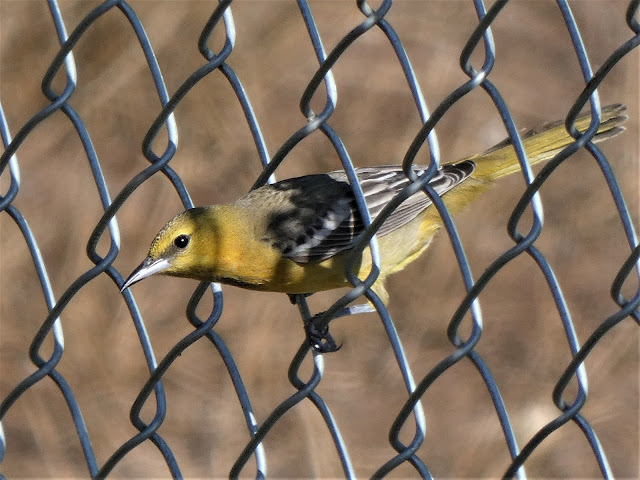 I followed the advice of local birders and searched the palm trees at Fox Grove a few miles downstream to find them for the first time. Not long after I discovered that some were nesting in palms along the Tuolumne Parkway Trail, a fact that thrilled me to no end. 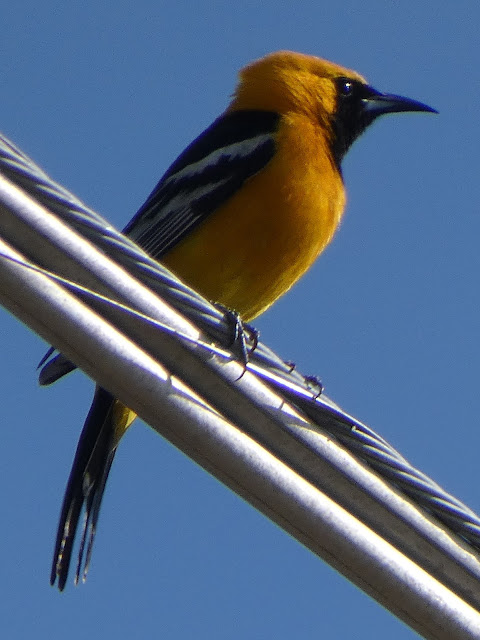 This year offered a big surprise, as a pair seemed to have not migrated to Mexico last winter, and stayed in the palms along the river. For a time they were the only Hooded Orioles reported in the entire Great Valley, and one of only four in the entire state of California. They've continued to hang out this summer, so this is a compilation of pictures I've managed to capture over the last few months during my daily walks. The more plainly colored individual is a female. 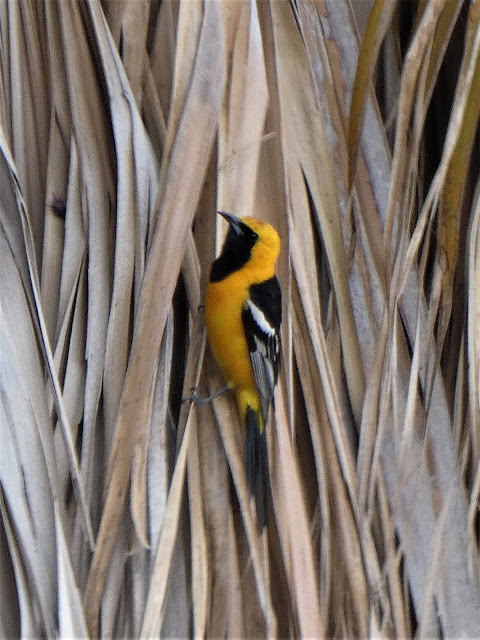 They are one of my favorite birds, as you might guess!
Posted by Garry Hayes at 4:06 PM No comments:

Ohmigosh It's Happened! A Blue Grosbeak on the Tuolumne River Trail! 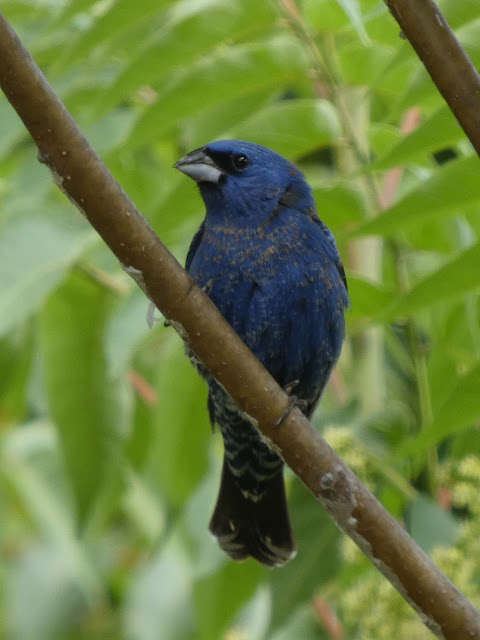 Sometimes there are just eerie little things about birdwatching. I'd think it was almost supernatural, but I think it has more to do with subconscious observations that rise to the conscious level. It's this: sometimes I'll think about a bird, and it will appear. I know the other day it happened because I heard the bird's song. I have a lot of trouble with hearing certain pitches so I am not able to depend on songs as a way to find and identify birds (it helps a lot to have Mrs. Geotripper along; she hears them, I see them!). So I heard a distinctive song in the thickets and I compared it to the song for a Black-headed Grosbeak on my phone, and the bird suddenly appeared, wanting to know what bird had invaded its territory.

The other time it was about playing the odds. It's spring, and flycatcher species are arriving in the region, so I'm paying more attention to the particular trees and branches where I've seen them in years past, and thus I discovered an Olive-sided Flycatcher on the trail a day or two ago.

But today was strange because I've never seen a Blue Grosbeak (Passerina caerulea) on the Tuolumne River Parkway Trail. Not once in the four years that I've been watching for them. I've seen them eight miles upstream at Robert's Ferry, and I've seen them ten miles downstream, but no closer than that. It stands to reason that they would come through the area, but I've just not had the ability to pick them out up until now. 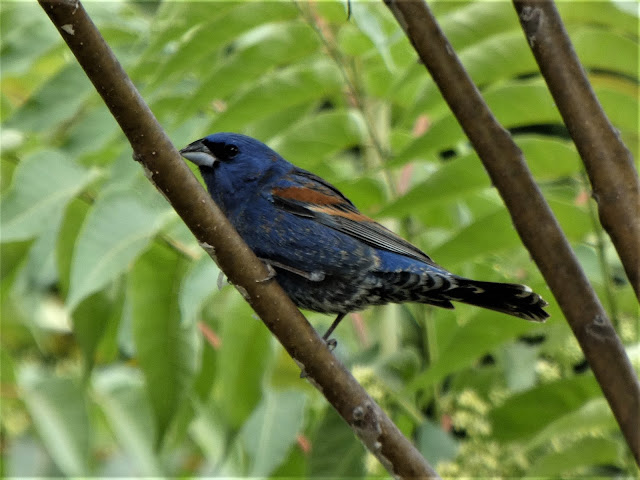 So I was walking the trail this morning. It was pleasantly cool and the air was fresh and clean following yesterday's storm. I saw a bunch of interesting birds that I don't see all that often, including a Hooded Oriole, a White-breasted Nuthatch, and a Green Heron. I was getting to the end of the trail, and I stopped and thought to myself that I still haven't seen the wily Blue Grosbeak. And there it was! It was just 30-40 feet away, and it held still long enough for a couple of decent shots. I have a feeling that I saw it out of the corner of my eye, saw the blueness, and thus began thinking about grosbeaks. Or maybe it was just ESP....

The Blue Grosbeak is a tropical migrant that spends winters in Central America and Mexico. They come north to breed, and our valley is near the northern edge of their range (although their range is expanding). It is one of the prettiest birds I've ever come across, and it was such a thrill to finally see one in my "backyard". 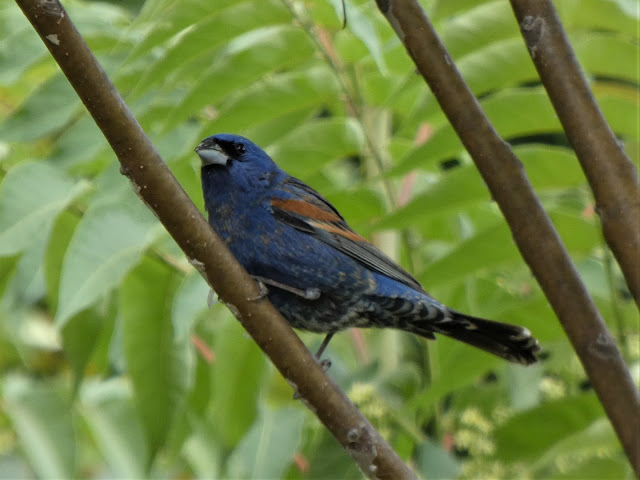 Posted by Garry Hayes at 2:06 PM No comments: 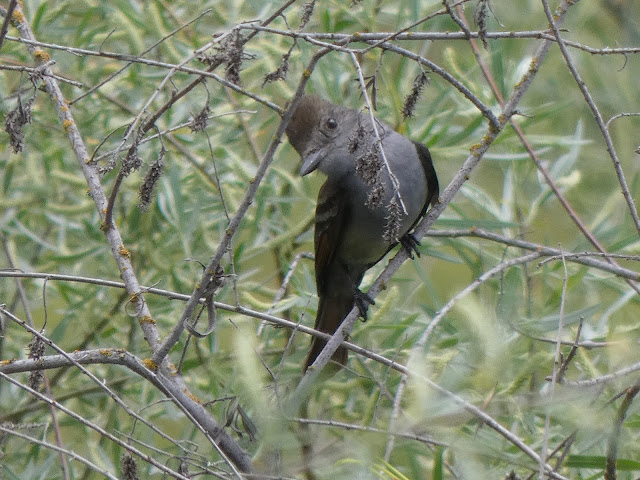 Sometimes one sees the strangest things out there. I was busy social distancing with Mrs. Geotripper up the Tuolumne River a few miles where a hundred-year-old bridge was replaced by a modern span back in the 1980s. Old Basso Bridge remains at its original location, but only pedestrians are allowed to cross it. The bridge is a good spot for birding, being a high observation deck for spotting avian creatures in the adjacent underbrush and trees. We are especially drawn there in the spring because Ospreys have adopted the bridge as a nesting locality and because it is a fairly dependable place to spy Phainopeplas.

I saw a dark shape in the Russian Olive thicket, and thought I had found a Phainopepla, but noticed  that it had no crest or red eye. The problem is that I didn't know what it was. The more I studied the pictures, the more I realized it looked in all but color like an Ash-throated Flycatcher (Myiarchus cinerascens). I searched the internet, and played with photoshop to see if I could turn it into a normal flycatcher, but had to give up. I made inquiries on the Flycatchers of North America and Birding California groups on Facebook, and most of the speculation coalesced around it being a melanistic Ash-throated Flycatcher. 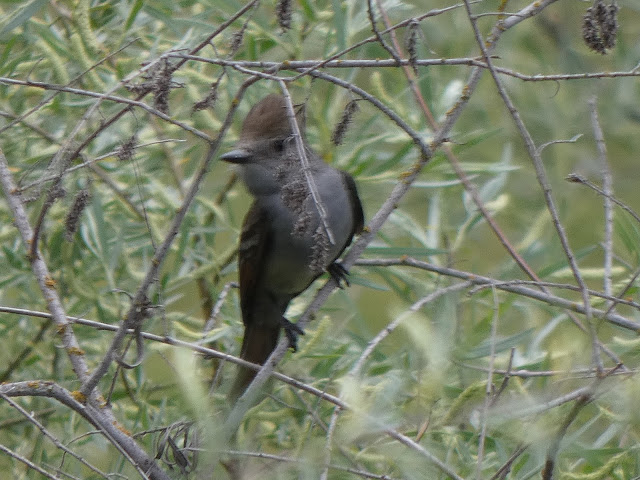 Melanism is a genetic mutation that results in additional pigmentation in the feathers. It happens in a number of different birds and has been documented in several species of flycatchers. I couldn't find anything about melanistic Ash-throated Flycatchers, so unless there is some more documentation from those who know more about birds than me, I will leave this as a hypothesis. But an intriguing one. 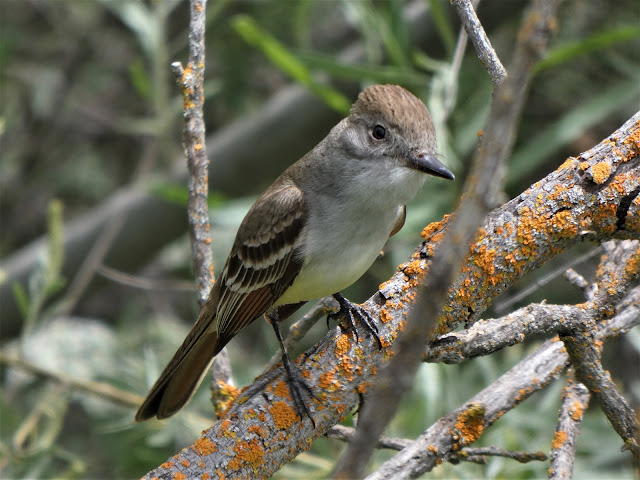 I went out two days later to see if I could find the bird again and was unsuccessful, but I did find one or two normally pigmented Ash-throated Flycatchers, which I've added here for comparison's sake. 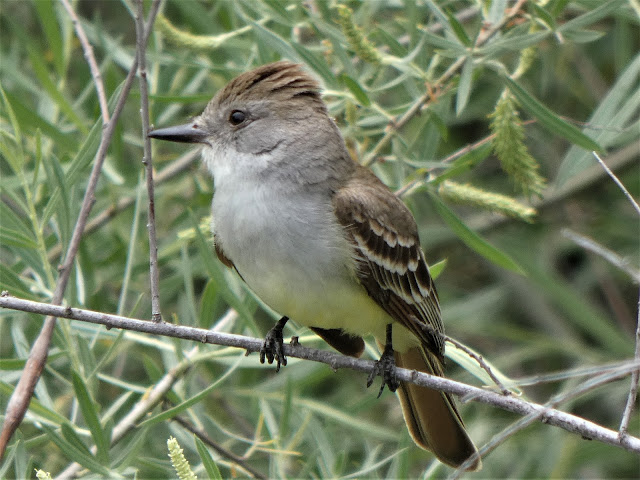 This has been a strange year for me and strange-colored flycatcher species. Last October I discovered a leucistic Black Phoebe at the Merced National Wildlife Refuge (leucism is a mutation causing a lack of sufficient pigmentation leading to light coloration). I've seen both ends of the gray spectrum!

Is There a New Mute Swan Family or Not? 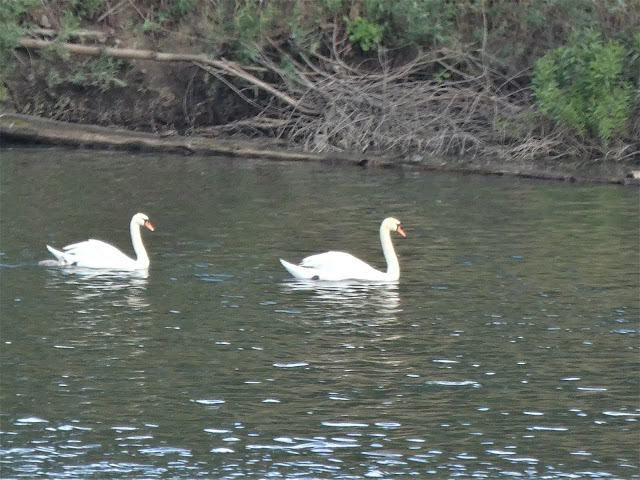 There is a mildly silly meme going around on Facebook about how many ducks are in the picture. Back in the real world, I've been watching the Mute Swans (Cygnus olor) on the Tuolumne River Parkway Trail for weeks now. The pair have produced a family for each of the last three years, and I've been watching their progress this year. A month or two ago they chased off their progeny from 2019, and the female disappeared for many weeks, no doubt watching her nest. The male spent most of his time chasing and harassing the Canada Geese who also inhabit the pond.

Then two days ago, the female reappeared, but I couldn't make out any young cygnets. It was the same when I saw the pair again today, but I took a picture anyway. Later I looked at the picture again, and now I ask, "Is there a new Mute Swan family this year or not?"

As far as the silly duck meme is concerned, it's sixteen. Really. 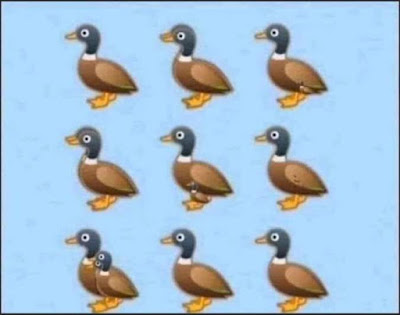 Posted by Garry Hayes at 7:09 PM No comments: 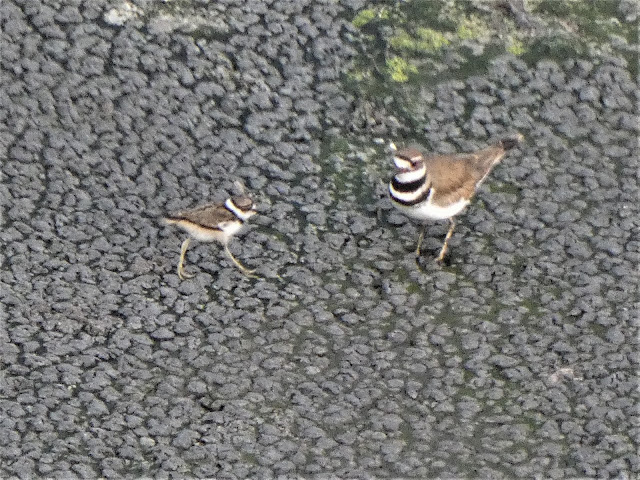 A first for me: a baby Killdeer (Charadrius vociferous). I was watching for the Killdeer eggs to hatch last year at our Outdoor Nature Lab at the Great Valley Museum, but I was out of town when they were born, and they were gone by the time I got back. I've been watching a nesting Killdeer along the trail for the last few weeks, but those babies haven't hatched yet. But tonight I was walking near the eastern end of the water treatment plant when I saw a couple of shorebirds in the distance. One was big, and the other wasn't. I focused in and realized it was a young Killdeer following its parent. There's no telling precisely how old it is. They are able to walk as soon as their feathers dry after hatching. 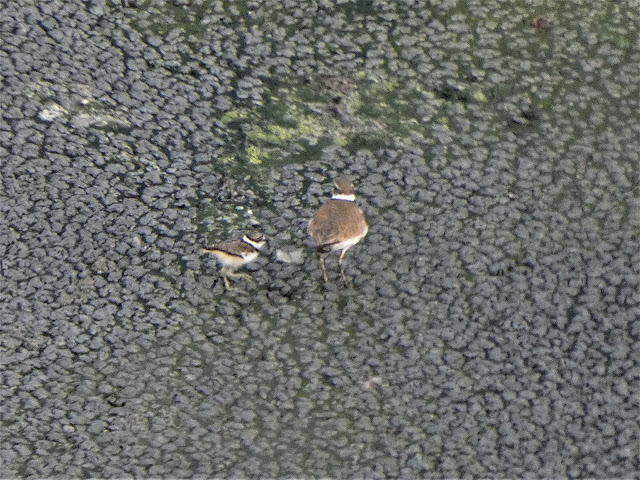 Posted by Garry Hayes at 8:41 PM No comments:

One of the Hidden Ones: A Hermit Thrush on the Tuolumne River 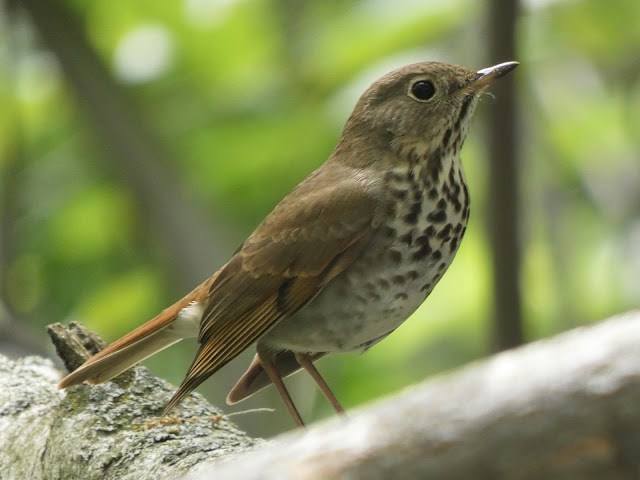 I'm often reminded on my walks through the river woodlands just how many birds and other animals  I don't see. I know good and well that there are myriads of creatures watching me, but I almost never see them back. The reminder in this instance came when I saw a Hermit Thrush (Catharus guttatus) for only the second time on the trail (the first time was way back in 2015). And as is usual for me, I only barely realized what it was. 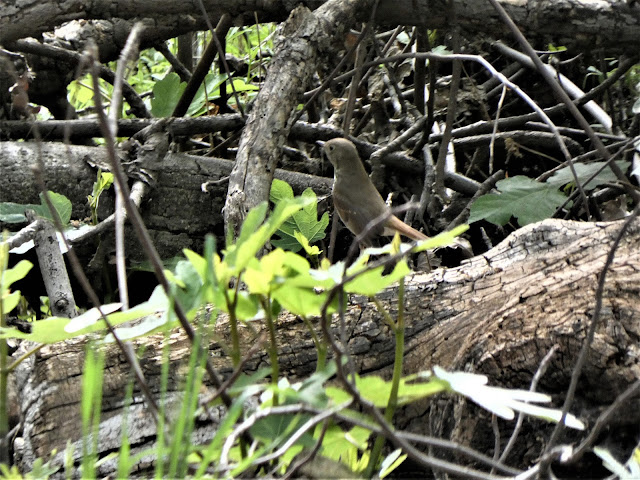 There is a particularly lush green section of the trail with overhanging oak and fig trees, and lots of underbrush. If I see any birds at all among all the shrubs, they tend to be California Towhees, which are kind of a drab brown with a reddish rump. So I wasn't too excited when I saw the drab brown bird, but something seemed a little different about it so I snapped some pictures and waited for to turn around. When it did I realized it was actually a Hermit Thrush (the spots gave it away). It's a pretty bird with a nice song. I would love to see them more often! 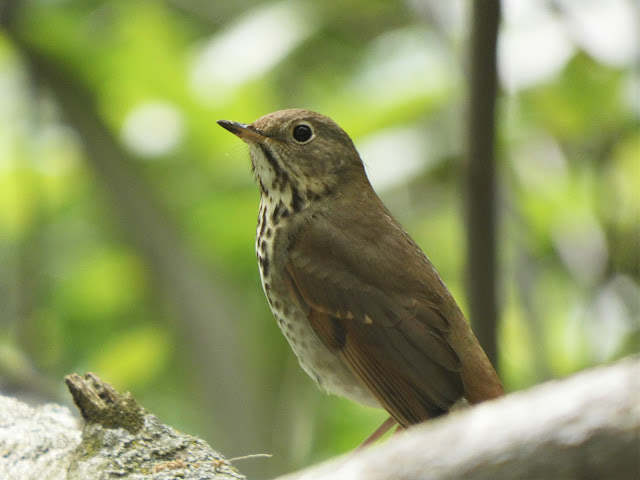